High-profile science need not be the cornerstone of Indian science policy. What is required is to give more thrust to existing methodologies and increase peoples' awareness in scientific developments 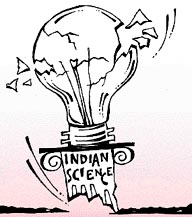 BIOTECHNOLOGY or space science? Superconductivity or cancer research? Information technology or solar energy? Where should India allocate scarce funds for science to achieve maximum returns for he nation? These questions were recently highlighted at the opening of the Indian National Science Academy's Jubilee Centre, and the inauguration of the 84th Indian Science Congress in New Delhi. Politicians and scientists alike joined the President and the Prime Minister in exploring India's scientific path into the future. But the way forward remains unclear.

The 'challenge of the balance' is central to the science debate. Should scientific effort in India be directed towards promoting development or towards mitigating its environmental impacts? Certain voices promoted the view that novel high-profile science and its application will lead to increased national prosperity. But others pleaded for science that will help eradicate poverty, illiteracy and other social ills. These views highlight another balance to be struck. Should limited funds be directed towards big frontier science or to the appropriate application of existing scientific knowledge, which is cheaper, more widely accessible and more socially enabling?
Some development aims may well be furthered by funding big science. But I am not persuaded that India's growing environmental problems are best solved by more frontier research. Far more cost-effective would be the application of existing scientific method and theory. An ideal but practical three-pronged approach would monitor each environmental threat using simple data collection and analysis techniques, model the threat by applying already-tested scientific theory, and mitigate the threat by addressing the causes identified by the scientific model.

Take as an example the critical problem of the decreasing quantity and purity of groundwater. A recent World Bank study (Down To Earth, Vol 5, No 10) identified water pollution as India's largest environmental cost, even though the impacts of toxic pollution and groundwater degradation could not be included in the estimate for lack of data. Yet water levels and basic pollution indicators in wells are cheap and easy to measure. Monitoring these parameters over time requires labour and management rather than advanced science.

Many environmental threats can be tackled in this manner. The 'monitor, model and mitigate' approach does not require high-tech, high-cost scientific research but rather the straight forward application of the scientific method. However, there are numerous obstacles to the widespread application of this approach. The groundwater example points to a number of essentially social prerequisites for science to play its full environmental role.

First, we scientists must come to terms with the decentralised. nature of much environmental data collection, perhaps using unsophisticated equipment and unskilled labour. However, decentralisation of science can have the advantage of giving the responsibility for making observations to those who stand to benefit from them - such as a farmer or a village responsible for a well - and securing plentiful data at small cost.

Second, scientists require free access to data to make accurate environmental assessments. Data must be freely released by official agencies - not only to their own scientists but for general scientific and public scrutiny (Down To Earth, Vol 5, No 1). Third, scientists must accept that the success of an environmental scheme relies only partly on the quality of its scientific component, and just as much on social, economic and political factors. We scientists the world over, tend to have an aversion to the seemingly less rigorous and objective activities of the rest of real life! Lastly, and most importantly, scientific study of the environment can only succeed in a climate of public understanding of the problems and of routes to their solutions.

Nigel Woodcock is an environmental geologist and a lecturer in earth sciences at the University of Cambridge, UK