Government plans to set up four large-scale solar power plants that will cost a whopping Rs 1.2 lakh crore. Will they serve millions of energy poor?

The bigger the better seems to be the mantra of Central government ministries these days. If the Union Ministry of Power can promote ultra mega thermal power projects, each with a capacity of 4,000 MW or more, why should the Union Ministry of New and Renewable Energy (MNRE) be left behind? MNRE too wants to set up four ultra mega solar power plants (UMSPP) of 4,000 MW using solar photovoltaic (PV) technology. The rationale put forth for investing in big plants is that it will reduce the cost of solar PV power from the current Rs 7-8 per unit (kiloWatt-hour) to Rs 5 per unit over the next seven to 10 years. The plants would be set up at Sambhar in Rajasthan, Khargoda in Gujarat and Ladakh and Kargil in Jammu and Kashmir.

On January 29, 2014, MNRE announced setting up the first UMSPP project in Sambhar. Three ministries—MNRE, Union Ministry of Power and Ministry of Heavy Industries and Public Enterprises—and six public sector undertakings (PSUs) have come together to develop and operate the project. It will be completed in seven years and will cost Rs 30,000 crore. This is excluding the cost of land, and transmission and distribution ( T&D) infrastructure. When fully operational, the plant is expected to generate 6,000 million units of electricity annually for 25 years, and offset more than four million tonnes of CO2 a year.

Responsibilities among PSUs have been divided, as is the equity share. Bharat Heavy Electricals Ltd will supply equipment; Solar Energy Corporation of India will sell electricity; Rajasthan Electronics and Instruments Ltd will look into operation and maintenance; Sambhar Salt Ltd will make available 8,000 hectares (ha) of surplus land it has in Sambhar; Power Grid Corporation will look into power evacuation; and Satluj Jal Vidyut Nigam will be in charge of managing the project. It will be set up in phases. The first phase aims at achieving 1,000 MW by the end of 2016. The remaining 3,000 MW will be generated through tenders to different developers to generate 500 MW each.

The Sambhar UMSPP will be funded through viability gap funding (VGF), which means the government will pitch in to meet a portion of the capital cost to make the project viable. The government will provide a VGF of Rs 1,000 crore from the National Clean Energy Fund (NCEF) for the first phase. NCEF was set up to promote clean energy through a cess of Rs 50 on every tonne of coal consumed in the country. MNRE has also approached the World Bank for loan assistance of US $500 million for the first phase of Sambhar UMSPP.

Is it worth it?

At first glance, the UMSPP project is too good to be objected. It will use surplus land and bring down the cost of solar energy. PSUs will use public funds to set up a project of public interest. The country will get the much needed electricity as well as contribute to mitigating climate change.

But is that so? Let’s assess the project from the aspects of priorities and challenges that the country faces.

We have singularly failed in providing access to adequate, affordable and clean energy to a large section of the country’s population. As per the Census 2011, one-third of households—about 400 million people—do not have access to electricity. In rural India, about 45 per cent of the households—more than 77 million—continue to use kerosene to light their homes and shops. With no access to any source of lighting, 1.2 million households go dark after sunset. The country is paying huge development costs because of this energy poverty—education, health and economic development are getting stymied. 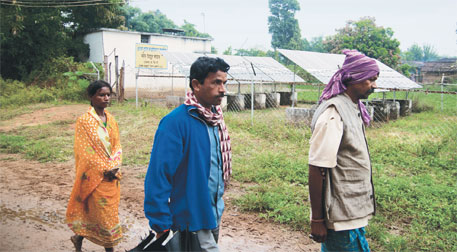 Before answering this question, it is important to examine what makes more sense: big or small solar power plants?

Germany, the leader in solar energy, has most of its solar PV installed on rooftops. About 1.3 million households have installed 30,000 MW worth of solar PV panels. They are either feeding it to local grids or consuming it domestically. With large-scale rooftop installation, Germany has brought down the price of solar energy by 70 per cent in the past 10 years. Therefore, the idea that investing in big projects alone will bring down the cost of solar power is not true. Large-scale investment in small power plants will yield the same result.

Besides, big solar power plants are viable only when they use solar thermal energy. Unlike PV, solar thermal is a centralised technology. It converts solar radiation into steam, which is then used to run a large conventional turbine. Big solar plants across the world, such as those in the US and Spain, are mostly based on solar thermal technology.

India is the only country which is investing in big solar PV projects. We have installed 2,000 MW grid-connected plants, mostly in Gujarat and Rajasthan. In the past five years, the price of solar energy has halved. It is debatable whether this reduction is because of installing 2,000 MW solar power, or due to the glut in the solar industry and dumping of solar PV panels by Chinese and US companies. Considering that India accounted for only 3 per cent of the global demand, the price reduction seems to be mostly due to the glut. But this does not mean that increase in demand will not reduce the price. It will. The question is how should we ramp up this demand?

We should ramp up solar energy to provide electricity to the millions that have not seen an electric bulb. For this, the government needs to incentivise businesses to invest in small-scale solar plants and mini-grids.

The four UMSPP of 16,000 MW that MNRE plans to install will cost more than Rs 1.2 lakh crore (this is excluding the T&D infrastructure costs), and require 35,000 ha. At least 10,000 MW worth of small solar plants and mini-grids can be set up using this money and much less land. These small solar plants, equipped with energy storage option, will have the potential to provide at least one unit of electricity to each household per day. This is sufficient to light up 40-50 million households, or half of those without electricity in rural India.

The government can make this possible by incentivising solar mini-grids with the same model it employs for grid-connected, large-scale solar power plants. Like grid-connected projects, mini-grid projects should be provided with a feed-in-tariff (FiT) or VGF. They can also be made grid interactive. This means, when the grid reaches a village, the mini-grid can be used to export power to the grid as well as import from it, depending upon growing needs or deficits. Consumers can be asked to pay the grid tariff; the government can pitch in with the remaining as FiT or VGF. This model can also be used in urban areas for rooftop power producers.

The other major advantage small solar power plants have over the big ones is instead of a few big businesses setting up large-scale solar power plants, we can promote thousands of small businesses through solar mini-grids and social entrepreneurs to serve the local population. This will create jobs at the local level and build local economies.

This model will revolutionise the way power is produced and consumed in India. This will also bring down the price of solar power—the main objective of setting up UMSPPs. It will be a better way of utilising the resources of NCEF and PSUs. n

Chandra Bhushan is Deputy Director General of Centre for Science and Environment, a non-profit in Delhi