Who's afraid of slumdog millionaire?

Serious quiz buffs frown upon such game shows on TV

"All the world is a quiz, and all the men and women merely players." That's how the late Magns Magnsson, iconic host of bbc television's long-running quiz Mastermind, described his line of work. These words came to mind as I watched the new Danny Boyle movie Slumdog Millionaire. For two hours, I alternated between the rough world of Mumbai slums and the glitzy world of television quizzing.

It's a feel-good, rags-to-riches story about Jamal Malik, an 18 year-old orphan from the slums of Mumbai who goes on to win a staggering Rs 2 crore on a popular TV game show. The story, adapted from an award-winning novel Q&A (2005) by Indian diplomat Vikas Swarup, resonated strongly with me given my own long-standing association with the overlapping spheres of quizzing and television.

As the story unfolds, we find out how and why Jamal, who has had little or no formal schooling and lacks ambition to win, got on the show. Through a series of amazing coincidences, commonplace in the movies that often ask us to suspend disbelief, the answer to each question he faces is deeply etched in his memory from his past.

When the show breaks for the night, Jamal is only one question away from winning the show's grand prize. But the organizers just can't believe that an uneducated street kid (or a slumdog) has made it thus far; they suspect some elaborate cheating.

Jamal is arrested and the police torture him all night to find out how he did it. To prove his innocence, Jamal tells his life story how he and his brother Salim grew up in Mumbai's Dharavi slums, of their adventures together on the road, of vicious encounters with local gangs, and of Latika, the girl he loved and lost. Each chapter of his story holds the key to answering the game show's questions.

One of its sub-plots offers insights into the high adrenalin world of TV quiz shows. The film has used the actual set of Kaun Banega Crorepati (kbc), the Indian version of the globally popular game show, Who Wants to be a Millionaire, which offers large cash prizes for correctly answering 15 (or, in some countries, 12) consecutive multiple-choice questions of increasing difficulty. This is the highly commercialized end of the quizzing world, which traditionally sought knowledge for its own sake. For example, the winner of BBC Mastermind receives nothing more than the coveted title. 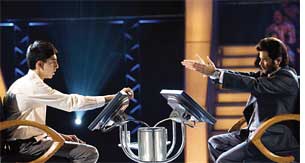 Slumdog Millionaire reminds us, yet again, not to equate knowledge with intelligence. Quizzes of every kind only test the general knowledge and quick recollection ability among participants--but not necessarily their intelligence. Measuring intelligence is a specialized and complicated process. Such measurements are not always accurate because of cultural diversity and other variables. Although someone excelling in quiz would, in all likelihood, also have a high level of intelligence, quiz performance is no measure of IQ.

Similarly, there is also no direct co-relation between the level of educational attainment and performance at general knowledge quizzes. While good quiz kids tend to be high achievers, it is not always so. A London taxi driver once beat dozens of academics and professionals to emerge winner in Brain of Britain, the bbc's long-running radio quiz. Apparently he read a great deal while waiting for hires.

Serious quiz enthusiasts frown upon game shows like kbc as a dumbing down of the cerebral art. But there's no denying that, by invoking popular culture, the new formats have hugely enhanced TV audiences following quizzing. True aficionados can turn to Mastermind and other pure forms of quizzing that stay above the fray of commerce. For the rest, game shows mix the quest for knowledge with the pursuit of happiness in a material world.