Whose flat is it anyway 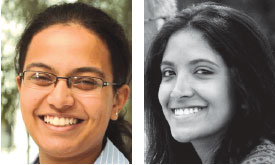 In their manifestos for the last Delhi Assembly elections, the three political parties, the Indian National Congress, Bharatiya Janata Party and Aam Aadmi Party, promised flats to those living in jhuggi jhopdi clusters (JJCs). The idea is not new. Delhi’s Congress government had prepared an action plan to make Delhi “slum free” by 2015. Although constructing houses for all JJC dwellers has proved to be difficult, more than 14,000 flats for the economically weaker sections (EWS) were reportedly ready for occupation by the end of 2013. Before a new government prepares plans for providing housing for JJC dwellers, it should decide on who receives these flats. 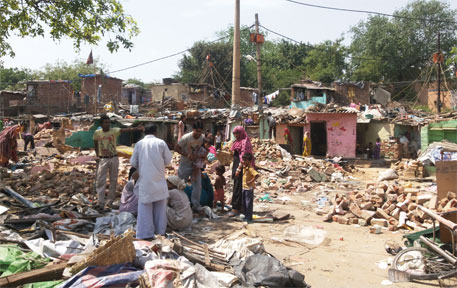 The government must resolve two other issues that so far remain elusive. The Congress government had prepared several schemes for resettling JJC dwellers. Until 2007, when the government began giving “eligible” JJC dwellers flats in peripheral resettlement colonies, it had allotted undeveloped plots in these colonies to eligible slum dwellers. It’s only recently that the government has proposed in-situ rehabilitation (improving existing housing) in areas like Kathputli Colony and Kalkaji. Irrespective of the nature of the scheme, meaning whether the flats are in a resettlement colony or at the location of jhuggi, there is no clarity on which JJCs will be selected for rehabilitation, and which residents of selected JJCs will be eligible for a flat. Resolving these issues are crucial for creating sound and just processes of rehabilitating JJC dwellers.

In 2010, the Delhi Cabinet asked the Slum and JJ Department of the Municipal Corporation of Delhi to prepare a priority list of JJCs for relocation. Later that year, the Delhi Urban Shelter Improvement Board (DUSIB) replaced the department and took over the responsibility. By December 2011, it had prepared a list of 33 JJCs that were to be rehabilitated on a priority basis. The number increased to 53 by the following February. Today, 95 of the 685 JJCs are in the priority list.

In 2012, in response to a CAG inquiry into the selection of JJCs for rehabilitation, DUSIB asserted that it acts only upon requests of land-owning agencies in the clusters. DUSIB oversees only 99 of the 685 JJCs, while the remaining are on the land owned by 16 Central, state and local government agencies. This means the process of prioritisation is controlled by these 16 agencies. But no information is available explaining how a JJC is given priority over another.

Experience and data suggest that no government agency has the authority to prioritise a particular JJC for rehabilitation. This leaves the process entirely subject to the whims of land-owning agencies. Even in a JJC designated for relocation, not all residents are considered eligible for flats. Constantly changing eligibility criteria leaves most residents in the lurch.

For instance, a JJC household is considered eligible for a flat only after it provides documentary evidence that the family has been residing at the JJC prior to a particular date. But this seemingly clear policy is entirely vague. First, the cut-off date has been a moving target. In February 2013, the Delhi government extended the cut-off date for relocation from January 31, 2007, to June 4, 2009. Earlier, it had set the cut-off date at April 1, 2002.

As the cut-off date has moved, the basis for proving residence has also changed. A seemingly straightforward issue has become increasingly complex. Residents must now submit a voter ID card from three different years: one from a date prior to June 4, 2009; another from the year DUSIB surveyed the JJC; and a third from January 1, 2013. Additionally, they need to provide an additional proof of residence that satisfies the 2009 cut-off date and the Unique Identification (UID) numbers of the applicant and his or her spouse.

Earlier, jhuggi residents were asked to show their level of income to be eligible for EWS flats. Here too applicants had to contend with a shifting threshold.

In February 2011, the annual income cut-off was raised from Rs 60,000 to Rs 1 lakh per household. The criterion was dropped in February 2013. So, why did it exist in the first place?

Who got the flats?

According to the website of DUSIB, by July 2012 residents of eight JJCs had been allotted EWS flats, and lists had been prepared for another seven JJCs.

In the eight JJCs that were relocated, only 507 (45 per cent) of the 1,124 applicants were eligible for EWS flats. Eligibility rate was below 30 per cent in Karam Pura and Wazir Pur JJCs, while it hovered around 75 per cent in JJCs of Kidwai Nagar and Bharti Nagar. In the seven JJCs for which lists of beneficiaries had been prepared, 839 (44 per cent) of the 1,921 applicants were declared eligible. In the JJC of Nivedita Kunj, only one of the 64 applicants was eligible. 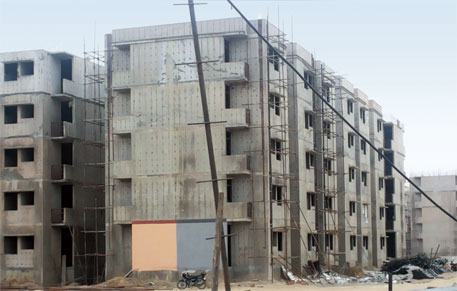 To be “eligible”, the website states, the applicant should have (a) appeared on the voter lists of 2002, 2007, and 2010 from the same address; (b) had a ration card from the address, presumably satisfying the 2007 cut-off date; and (c) had an income certificate. Whatever be the reason, a policy meant to rehabilitate those evicted from JJCs has excluded about 50 per cent of residents.

Besides, these decisions on eligibility for at least 10 of the 15 JJCs were taken much before the government changed the cut-off date from January 2007 to June 2009, and removed the income cut-off and ration card requirement. It remains to be seen how many applicants will be eligible according to the new criteria, and whether those declared ineligible will be reconsidered.

Fortunately, DUSIB has recognised this flaw. In August 2013, during its ninth board meeting, the then Chief Minister Sheila Dikshit “expressed dismay” about the low level of eligibility. She was informed that DUSIB had previously approved a proposal for “holding areas/transit accommodation”. She suggested that “people in transit places be allowed to stay for four to five years only on payment of rent”. No information is available on what steps have been taken towards creating this kind of accommodation, where they will be located, and what they will look like.

What exactly is the point of rehabilitating only half of a JJC? Does rental housing for those found ineligible provide a solution? When Delhi has a new government, it will have to find answers to many such questions.

Shahana Sheikh and Subhadra Banda are with the Centre for Policy Research, New Delhi. They can be reached at ssheikh@cprindia.org and subhadra.banda@cprindia.org

Report: Analysis of slum area in Delhi and alternative strategies of rehabilitation