The US idea of internal security is opening a booming market for companies, while funds for development are still paltry 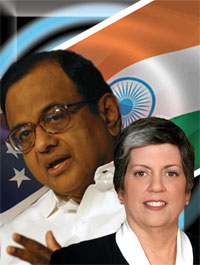 Homeland security is a heady business. It means big bucks and a huge role for private security advisers and contractors in protecting us from threats, both real and imagined. As easily as we have borrowed the terminology and ideology of security from the Americans—when exactly did “homeland” come to India?—we have also subscribed to the US administration’s way of tackling security challenges. Remember Blackwater, the world’s most infamous private security firm which made headlines with its trigger happy recruits in Iraq? That’s the kind of solution that could become a significant option here.

I got a whiff of this at a seminar some months ago where it was clear that the private companies offering the latest security gizmos—acting mostly as agents for American and European manufacturers—and a range of services were trying to carve out a huge market for themselves by whipping up a fear psychosis. It was rather a surreal morning that I spent at the Federation of Indian Chambers of Commerce and Industry (FICCI) talk shop. All kinds of security experts from retired army generals working for private surveillance groups to high-flying risk assessment companies were handing out solutions for the security problems facing the country.

Fighting the Naxalite or Maoist threat appeared to be an all-consuming passion with many of the attendees. One gung-ho major general (retired) had the solution pat. This rather hot-blooded gentleman pointed out the Maoists had a narrow leadership: 32 members in the politburo and 13 in the central military command. “Finish them all off. Pit tribal against tribal and we can end the problem.” One was overcome by a feeling of unreality as this former army officer spun his thesis to an audience that consisted of senior officials of Ministry of Home Affairs (MHA). According to him, the Central Reserve Police Force was in no position to tackle insurgency and drastic measures such as the army had adopted in Jammu and Kashmir were necessary. Surely, no one is going to take such views seriously even if the Maoists are the biggest internal threat to the country as Prime Minister Manmohan Singh terms them.

Although the government’s armed offensive against the Maoists in central India appears to be in low gear for the moment, its views on how to tackle the problem appear to be fogged. While it admits the extremist-affected districts suffer from lack of development, it appears to have little idea of how to go forward although an expert group set up by the Planning Commission had in April 2008 outlined what needed to be done. Close to 32 months after the report was prepared, the commission decided to throw a paltry sum of Rs 55 crore to 60 such districts in two tranches. But even this allocation has now been held up owing to differences within the body on how to use the funds. So while the government dithers on this front, money for “homeland security”, it appears, will be flowing freely.

India is expected to be the largest security market in the world by 2020. Experts quoting defence ministry officials estimate that India will spend more than US $10 billion in homeland security on an emergency basis in the next two years. This means rich pickings for companies that have highlighted nuclear power plants as an emerging security concern, besides other installations like refineries and ports. The government, in their view, is ill-equipped to handle such challenges. The central thesis of the FICCI seminar, as at other lobbying organisations where the security industry has been showcasing a series of such events—Assocham has hired a top consultant to bring out a paper on homeland security—is that public-private partnerships are the way ahead. Mahindra Special Services Group, which sponsored the FICCI seminar, notched up a significant gain for the industry right at the beginning. FICCI secretary General Amit Mitra, now finance minister of West Bengal, made an impassioned plea to set up a working group with MHA so that the private players have an access to ministry officials and could take the technology discussed at the seminar forward. It was a suggestion that secretary, internal security in the home ministry, U K Bansal, readily accepted.

As this column was being written Home Minister Palaniappan Chidambaram was preparing to meet US Secretary of Homeland Security Janet Napolitano to launch the US-India Homeland Security dialogue, touted as a critical new component of the India-America Strategic Dialogue. One wonders where this will take us. Will we be a much safer country as India turns to American-style options to keep terrorist and extremist threats at bay? Or will we remain vulnerable as ever to foggy notions of security?