Whose view of climate equity?

It wasn't hard to predict that negotiations at the UN's Framework Convention on Climate Change (UNFCCC) would get more polarized as the deadline for a post-2012 climate pact neared. The first phase of the Kyoto Protocol, which sets emission targets for developed countries (the so-called "first commitment period), draws to a close in 2012, and countries are to negotiate fresh commitments at Copenhagen in December this year.

At a precursor meeting in Bali in December 2007, the North-South divide over commitments was bridged to a very limited extent, but the key issues - emission reduction targets and cost-sharing - were yet to be negotiated. At UNFCCC meetings in Bonn in April, fault lines became sharper. And in a significant development, the North-South divide became a hot issue within the Climate Action Network (can), the civil society coalition that actively seeks to influence the negotiations.

Simply put, the North-South debate is about whether the UNFCCC should be renegotiated to include "economically advanced" developing countries in a regime of quantified emissions limits, or whether developed countries need to "take the lead" by living up to their UNFCCC and Kyoto commitments. The developing countries have been advancing their negotiating position in two main ways. Firstly, they assert that Annex I nations (developed countries) are bound by UNFCCC'sArticle 4.3 to meet "full incremental costs" of developing country initiatives to check climate change. Second, they are trying to stall moves by developed countries to fuse two strands of climate negotiations - those at the ad hoc working group on the Kyoto Protocol, where short-term targets are discussed, and negotiations at the Ad Hoc Working Group on Long-term Cooperative Action - by linking new Annex I targets to diffentiation of emission reduction goals for developing countries.

How has this affected the debates within CAN? The civil society organization is now divided over appropriate strategy. Disagreements surfaced over the adoption of a new position paper on Annex I mitigation targets, motivated by a widely felt need within CAN to increase emission reduction targets for Annex I. 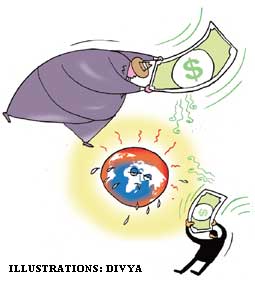 CAN had hitherto advocated that by 2020, Annex I emissions reductions need to be "on the high side" of the 25-40 per cent (below 1990 levels) range - a range, widely, but wrongly, interpreted in the policy community as the IPCC's recommendation to stall a temperature increase of more than 2C. The IPCC's Fourth Assessment Report has also been interpreted as endorsing a "substantial deviation from baseline" in most developing countries by 2020. TwoIPCCscientists (Michel den Elzen and Niklas Hhne) quantified this deviation as "15-30 per cent below baseline". This was the appropriate non-Annex I complement to the 25-40 per cent range for Annex I countries, they said.

Developing countries differ. They argue that the EC'sposition effectively represents renegotiation of UNFCCC. Yet the draft CAN position paper echoed the EC's language: "Developing countries will implement unilaterally low-cost and no-regrets measures that can be achieved without international support according to their capacity." This in a paper on Annex 1 reductions!

After substantial pushback from myself and other people and groups within CAN,the language of the final draft was subtly changed. A stronger emphasis was put on the need for "measurable, reportable and verifiable" financial and technological support from the Annex I countries for the "agreed costs of mitigation in developing countries." But even this draft refers to "autonomous mitigation actions in developing countries according to their capacities," to be "legally enshrined in the Copenhagen agreement.". Athough the draft still substantially reflected the European position, rather than that of developing countries, in the end no major organization (including my organization Ecoequity) withheld support for this reason. Four US or international organizations did, however, go against it because of its call for an aggregate Annex I target of "more than 40 per cent by 2020 below 1990 levels," which is viewed in some quarters as "unrealistic."