Why are lives so cheap in Indian steel plants?

Centre for Science and Environment report had highlighted poor safety conditions in steel plants. Two mishaps in a row at the Bhilai and Visakhapatnam steel plants show no corrective measures have been taken

Centre for Science and Environment report had highlighted poor safety conditions in steel plants. Two mishaps in a row at the Bhilai and Visakhapatnam steel plants show no corrective measures have been taken 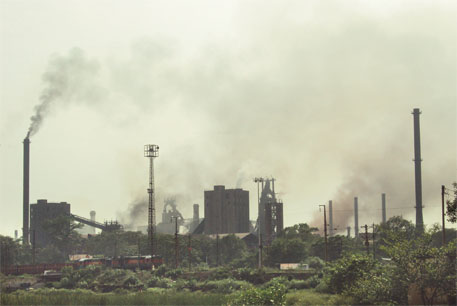 Health and safety are the most neglected concerns in Indian steel sector. This was again reinforced by two major accidents—one at the Bhilai steel plant in Chhattisgarh last Thursday and the other at the Visakhapatnam steel plant in Seemandhra on Monday.

Such mishaps are not new but we do not seem to have learnt from the past. In June 2012, a major blast had happened at Visakhapatnam steel plant, which claimed 16 lives and left many injured. The accident at the Bhilai Steel plant last week claimed six lives and injured over 30 people.

The accident at the Bhilai plant happened because of a blast in the gas cleaning plant area. Blast furnace gas is produced at a melted iron-making unit called blast furnace. This waste gas is poisonous, containing a mixture of carbon monoxide (26 per cent) and hydrogen (4 per cent); nitrogen and carbon dioxide make up the rest.  As it is energy rich gas, it is collected from the top of the blast furnace and water cooled and cleaned in the gas cleaning plant. The cleaned gas is used as fuel in other steel making units. This is one of the critical areas in a steel plant where chances of accidental release of the poisonous gas mixture are high.

Media reports suggest that the water pipeline connected to the gas cleaning plant had ruptured, which released water and poisonous waste gas in the environment and resulted in the mishap. It is said that the gas leakage was  reported a day before the mishap, but that officials failed to identify the source of leakage.

Poor maintenance and security in old aged plants mostly leads to such accidents. What's more, it's mostly non-skilled contract workers who are made to work in these hazardous areas which permanent employees and management prefer to avoid. These contract workers are not given adequate personal protection equipment or and health and safety support. Liability is taken by management but left on the contractor.

The accident at the Visakhapatnam steel plant, which killed two engineers, happened when  the two were inspecting the steel melting shop area.  Many more such accidents are just waiting to happen because preventive measures are not in place. It seems human lives are cheaper in steel plants. The problems are poor management systems and even poorer reporting systems. Many accidents and deaths go unreported.

The death (fatality) rate of the sector is one the highest in the world, around 50 in a year, says Delhi-based environmental NGO, Centre for Science and Environment (CSE). CSE’s Green Rating study released in 2012 had disclosed the poor health and safety status of the sector.

The report showed that Visakhapatnam steel plant, where 16 people died in the accident in June 2012, had an abysmal safety record with only 15-24.9 per cent score in safety, health and environment (SHE) category.  Bhilai Steel plant which is claimed to be a flagship plant of Steel authority of India (SAIL) scored less than 15 per cent in this category. The mishap at Bhilai Steel plant confirms the findings.

But is the steel sector ready to improve its health and safety record? Has the government machinery looking after industrial safety collapsed? These are questions no one seems to be willing to answer. The certificates and awards issued to steel industries for safety and environmental performance are dubious. Despite having number of fatalities every year, many of these plants have been awarded for best safety practices; some of them have received OHSAS 18001 certificates   for following international standards in occupational health and safety.

These awards show that neither the steel sector nor the government is ready to accept reality.  The Directive Principles of State Policy of the Indian Constitution says the government is expected to regulate all economic activities within the country, with a view to ensuring that every working employee is provided with safe and healthy working conditions. But the authorities show least concern.

Instead of waiting for another accident to happen, a system should be immediately put in place to regulate and impart training for overall health and safety performance in the sector. It is equally important to strengthen the institutional mechanism and laws which should ensure enforcement of laws, supervision and disclosure of performance on industrial safety and occupational health.