Why are we begging for eco-clean technology?

If industrialised countries were legally barred from exporting anything considered eco-unfriendly, industries in the developing countries would be automatically cleaned up 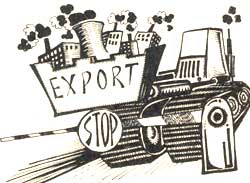 I HAVE been uncomfortable with the "transfer of technology" demands of developing countries during their environmental dialogue with the North. Let me explain:

We do stress, based on irrefutable data, that the North is responsible for the bulk of the perturbation that human beings have caused to the properties of the thermal blanket of the planet. And, they more or less agree. We point out that they are primarily culpable in respect of weakening the ozone shield. And, again, they agree. We say that most of the acid rain, the noxious chemicals and toxins let into the air, water and land masses of the earth are due to them. And, with this, too, they generally agree.

When we begin to consider ways of protecting the planet from further ruination, the North confidently declares it can meet the problems of technological and industrial growth, not by changing its basic directions or lifestyles, but through better technology, recycling and improving the energy efficiency of industries by finding less harmful substitutes for ozone-depleting emissions. Meanwhile, UN agencies proclaim in patronising terms that whereas the North can handle the challenges of impending environmental disasters essentially produced by them, developing countries, on the other hand, cannot. Therefore, the North should make available its latest environment-friendly technologies to the developing countries. And, this suggestion we applaud.

But it is this suggestion that makes me uncomfortable, though it seems to make sense to our diplomats, politicians and negotiators and even to many of my environmentalist friends.

It must be remembered that most of the technology now being used in the developing countries was imported, along with its polluting character, from industrialised countries. The pollution may have increased due to the machines aging or because the technology was inappropriate for locally available raw material, resulting in that industrialists -- theirs and ours -- colluding to do some not-so-nice things -- which, in a sense, is still happening.

For example, a newspaper advertisement announces a famous Italian leather goods manufacturer will be setting up a major plant in India because it can't meet the stringent environmental norms in its own country! With the government's increasing liberalisation, such instances are likely to multiply in our country, just like several Japanese polluting industries being moved to the Philippines and Indonesia.

No matter. We have to clean up our country and other countries must do the same. But we seem to be pleasing with the developed countries to please deign to transfer benign technology to us along with a few hundred million dollars in aid, maybe in the form of loans repayable with interest. We forget they would be only too eager to sell us all manner of goodies and, so, instead of the customer being king, the customer becomes a supplicant!

In the euphoria of opening up and of modernising through imports, we have almost forgotten the possibility that we need to and can create our own technology. We hardly ever offer to transfer free of cost to the developed world some examples of frugal, less resource consuming, less competitive and humanly happier, "technologies of living". Perhaps, we ourselves are becoming less aware of their existence or value.

Yashpal is the former chairperson of the University Grants Commission and a fellow of the Indian National Science Academy.