Why is river Yamuna still maily?

Officials do not understand the gray waters produced by the city

Officials do not understand the gray waters produced by the city 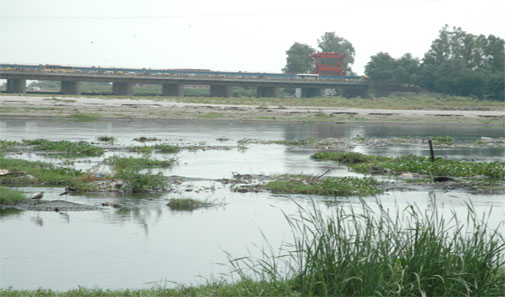 No one present at the National Green Tribunal (NGT) meet, which included many senior government officials from government of India and the state of Delhi and Haryana, had an answer to a pointed question put to the gathering by the chairman NGT, the other day. The meet had been called by the NGT to oversee the implementation of its judgment dated 13 January 2015 in OA No 6 of 2012 and OA No 300 of 2013. Titled “Maily (polluted) se (to) Nirmal (wholesome) Yamuna”, the comprehensive judgment seeks to ensure a rejuvenated river Yamuna in NCT of Delhi by the year 2017. The NGT has set in motion a consultative process whereby its non adversarial and public interest judgments like the one in question is sought to be regularly reviewed and impediments if any in its implementation removed. This was the first such meet and the chairman was inquiring as to why despite a spent of thousands of crores of rupees under the Yamuna Action Plans, the health of the river Yamuna had actually gone from bad to worse.

The reason for no answer to the query lay in a poor understanding and appreciation of the ground realities, amongst the city managers, of the gray waters that a city produces and the principles involved in their management in a well managed human settlement.

First is water exiting from homes after use in kitchen, bathroom and in toilet. Together this is termed “Sewage”. This water in raw form is often colored, foul smelling and a health hazard (due to high coli form levels). Municipalities are mandated to convey this water through closed and underground (preferably) sewerage networks to a sewage treatment plant (STP) and the treated effluent is often good enough to be recycled for use in meeting the city’s non-potable water uses like flushing in public toilets, irrigating parks and gardens, washing of public places, fire fighting etc. Depending on the degree of treatment, treated sewage could be a good source of irrigation of agricultural fields. In some places like Singapore and New York, lack of adequate fresh water supplies has resulted in sewage being treated to a potable level and supplied through the mains as “new water”.

In Delhi it is the Delhi Jal Board (DJB) which is the agency charged with laying and managing the city’s sewage and its sewerage network. DJB has recently come out with its Sewerage Master Plan, 2031 for the NCT of Delhi.

Second is water exiting from industries after its use within the industrial processes. This water is also often colored and smelling. But sometimes it could be colorless as well as odourless. But in both cases it is a serious health hazard when it carries heavy metals dissolved or suspended in it. This water is mandated to be treated in effluents treatment plants (ETPs) within the concerned industry or at a common effluent treatment plant (CETP) within an industrial cluster / estates. This water is best recycled back to the industry and reused there.

In Delhi it is the Delhi State Industries & Infrastructural Development Corporation Ltd (DSIIDC) that is the agency meant to ensure secure treatment and safe disposal/reuse of industrial effluents.

Third water is the storm period surface run off that is collected and conveyed in a timely manner to a nearest central drain for onwards transmission to a designated lake or a river.

Although rain water is ‘fresh’ water it is considered as part of the urban waste water system, since urban runoff includes solid and liquid components that needs some filtering (ideally in a natural manner) before it enters the nearest collection point (lake or a river).

Cities are mandated to create/maintain “storm water drainage networks” as their essential infrastructural requirement to prevent urban flooding. Normally such storm water (SW) drains originate as a natural feature of the city, but sometimes it may be necessary to create few of them to drain out surface runoff from a relatively flat area.

In Delhi resulting from the city’s topography, the river Yamuna is the end destination of all storm period surface run off and it is the Department of Irrigation and Flood control (DI&FC) that is mandated with managing the storm water runoff as well as the river floods. The DI&FC had in 1976 prepared a Drainage Master Plan of Delhi, which is currently under revision with the assistance and expert advice of the Indian Institute of technology (IIT), Delhi.

It is the storm water (SW) drains in the city that are illegally carrying a toxic mix of sewage, industrial effluent and the storm time run off to the river Yamuna from some 22 outfalls.

According to the draft Sewerage Master Plan, 2031 of NCT of Delhi, fifty percent of the NCT of Delhi is still not covered under the DJB sewerage network, although the most densely populated areas in the city in north, central, south and east Delhi has a DJB managed sewerage network.

But the sewerage infrastructure in the existing network is in need of extensive repairs and its management needs urgent improvement so that the sewer out flowing unauthorisedly and in contravention of the Water Act, 1974 into the nearby storm water drains and ultimately into the river Yamuna is prevented.

In response to the directions given by the Hon’ble NGT in OA No 300 of 2013, the DJB has submitted a Rs 4000 crore plan to delink sewer network and the storm water network within 3 years.

Where does the industrial effluent in the city drain?

It is anybody’s guess as to where do the industrial effluent in the city both from the conforming (legal) and the non conforming (illegal) areas go? To the nearest storm water drain and sometimes even into the sewerage sub surface network. Many a times this effluent carries heavy metals and sometimes hazardous discharge.

Storm water drains (some 201 of them) in the city are classic ‘orphans’ with no single agency in the city responsible for them. The result is that almost each of them have been ill treated and misused to almost extinction (44 drains are still untraceable on the ground). Most carry a toxic mix of sewage, industrial effluents and storm period run off. Many have been encroached and dumped with construction debris and municipal solid wastes of all kinds. Some have been covered and converted into parking lots, commercial establishments and public roads.

It is a matter of regret that the Department of Irrigation and Flood Control (DI&FC) that should be at the forefront of the security and maintenance of the SW drains in the city seem blissfully unaware of its role and the sad and deteriorating state of the city’s SW drains.

Annually crores of rupees are spent in the name of their de-siltation and cleaning with hardly any difference resulting to their overall sad state of neglect and despoliation. Blame game amongst different agencies in the event of urban flooding (which is frequent) during monsoon is the order of the day.

Why is river Yamuna still Maily?

In any healthy city, these three (waste) waters would never mix or allowed to flow through the same drain. They have different origins and should have different and well defines destinations.
That this fundamental principle has been violated with impunity in Delhi is the key reason why despite such a huge spent under the Yamuna Action Plans (YAPs) no difference whatsoever has been effected in the health of the river Yamuna in the city.

This is because if a STP is mandated to treat only sewage but it is also receiving industrial effluents then obviously the so called treated water shall not be suitable for the purpose (irrigation or non-potable use) it is meant and hence shall not be found suitable for recycle and reuse. Similarly if an ETP (Effluent treatment plant) is mandated to treat industrial effluent but is also receiving sewage then the sewage treatment needs of the water would not get addressed.

But a court judgment, howsoever well intentioned, is just a piece of paper unless it is implemented in its letter and spirit by the executive. Hopefully with the Hon’ble NGT having set in a process of periodic review of the implementation of its judgment, the day when river Yamuna is no longer called “maily” might not be far! AMEN.