Since the law does nothing to provide for the welfare of camels and their breeders, the government must take over from the Raika their responsibility of looking after these animals

Since the law does nothing to provide for the welfare of camels and their breeders, the government must take over from the Raika their responsibility of looking after these animals


I love camels. That’s why I felt a deep connection to the Raika, Rajasthan’s hereditary camel breeders when I first came to India on a camel research project 25 years ago.  As I had done my PhD research on camel domestication and studied different camel cultures around the world, I quickly realised that the Raika were unique: they were the only camel people worldwide who had a strict taboo on the slaughtering of camels for meat.

I was so deeply impressed by the Raika and the unique Indian camel culture that it changed the course of my life. The one-year research stint turned into a lifelong obsession with traditional animal cultures as opposed to the animal industries that have gained ground in the West.

In order to better understand the local system, I bought a female camel at the Pushkar Fair in 1991. As I was based outside India then, I gave “Mira” into the care of a nomadic Raika herder. Mira reproduced and, following local customs, we sold her male offspring each year at the Pushkar fair, while we kept her daughters. In this way, my herd gradually grew to about 15 camels. It was not a profitable venture, but I enjoyed and felt proud of being a camel owner.

I have attended the Pushkar Fair almost every year since 1991 and noticed the gradual changes. It was in 2001 that a Raika leader drew our attention to some of the camels going for slaughter rather than being purchased by farmers as work animals. He was deeply upset about this and enlisted our help in stopping the practice. But the situation only worsened, and the number of camels sold for meat increased while the demand by farmers waned. 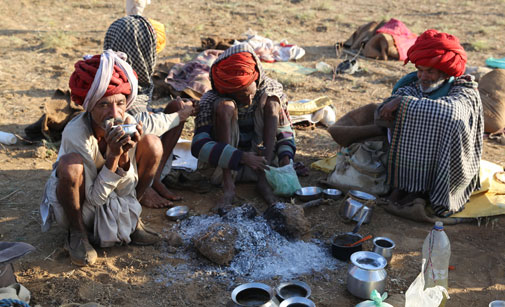 Since about 2011, it has become very difficult to sell camels at Pushkar, except for meat. When I could not find a buyer for three male camels for three years in a row, I decided to bring them back to my place in Pali district to start a camel farm, with the vague idea of putting them to work in ecotourism.

Here is what I learnt through this hands-on experience. Keeping camels is hard work and demands a lot of skills. We spend hours each morning taking care of their scratches as camels have a tendency to get abscesses. We spend a lot of money on medicines against mange. We have to find food and grazing for them. We are lucky to have Fuyaram, a Raika who owned 30 camels earlier, and  is a great care taker. But sometimes he needs leave to visit his family and then, we have to herd the camels ourselves.

Training the camels for riding is another problem as very few people have the skills. We have been searching a good trainer for months.  And then the rutting season: many of the male camels change their personality during those months, becoming difficult to handle and dangerous. Fuyaram suffered a few ribs broken last year when he was kicked by a camel.

Now, in order to save the camel, the government enacted the Rajasthan Camel (Prohibition of Slaughter and Regulation of Temporary Migration or Export) Bill, 2015, providing severe punishment for selling camels for slaughter, for taking them outside the state, for castrating them and even for using the nose peg.

I applaud the government of Rajasthan for declaring the camel the state animal. I am happy that it does not want camels slaughtered, even if they are old and sick, as I don’t subscribe to a “use and throw” philosophy myself. But it means that the government has also taken on the responsibility of feeding and taking care of these animals.

For sure, it cannot place this onus on the Raika who don’t have the luxury of keeping camels for a hobby, as I do. They need to make a living somehow. And at the moment, the income opportunities from camel herding are virtually zero. The dairies pay only a pittance for camel milk, as it is low in fat. India’s Food Safety and Standards Authority (FSSAI) has not even given the green light to marketing camel milk—which is stalling efforts in neighbouring Gujarat to set up camel dairying.

What are the camel breeders supposed to do? They cannot continue to do a 24/7 job without earning any income. Even if they were willing to, there are just no camel grazing areas left.

My concern is that the new law will increase camel suffering. Camels will die because of (involuntary) neglect, because of starvation, and because of the diseases that are spreading when camels go continuously hungry. This could be more cruel than slaughter.

The only solution for the government to avert a major camel welfare catastrophe is to quickly set up untshalas where the Raika can drop off their camel herds, so that they are relieved of their responsibility and can get on with earning livelihoods in new jobs.

The government then needs to grow camel forage to feed the untshala camels. Because most grazing areas have disappeared, it will have to reserve and regenerate some of the state’s alienated or neglected common property resources to grow trees for camels. Probably it will entrust the forest department with this. It will need to hire people to take care of and graze the untshala camels. As government jobs are quite popular, probably a good number of Raika youths will apply for them. It will have to purchase medicines against mange and trypanosomiasis to keep the camels healthy. It will need to hurry to set up a camel milk value chain to at least recover some of the costs incurred.

Come to think of it, if the government does all these things, then we don’t really need the Rajasthan camel Bill. Because one thing is sure: Rajasthan’s camel herders love their animals and if they sell them against their cultural beliefs, it is only to save their own livelihoods.

Ilse Köhler-Rollefson heads League for Pastoral Peoples and Endogenous Livestock Development, a non-profit which works with livestock keepers, and is the author of Camel Karma, a book on the Raika camel culture of Rajasthan