Why US-China climate deal is neither ‘historic’ nor ‘ambitious’

On November 12, 2014, US President Barack Obama and Chinese President Xi Jinping announced a joint plan to reduce greenhouse gas (GHG) emissions. The deal came as a big surprise to most. After all it is a deal between the world’s top polluters—the US is the world’s biggest historical polluter while China is the biggest current polluter. According to news reports, the US and China had worked on the deal quietly for the past nine months.

Commentators from across the world have hailed the deal. Terms like “historical”, “ambitious” and “breakthrough” have been used to describe the deal. Many have commented that this agreement will lead to a global deal in Paris in 2015 where countries are to agree to a post-2020 deal to tackle climate change. But in this cacophony of news, views and opinions, many important issues and concerns arising out of this deal have been lost.

Is this deal in line with keeping the global temperature increase below 2OC that countries have pledged under the UN Framework Convention on Climate Change (UNFCCC)? Is this deal in line with the principles of the convention, especially equity and common but differentiated responsibilities and respective capabilities (CBDRRC)? Can this be used as a benchmark to get an ambitious deal in Paris in 2015 and beyond? What will be the implications of this deal on other emerging and developing countries? These are the most important questions to answer before we give our verdict on the significance of this deal. 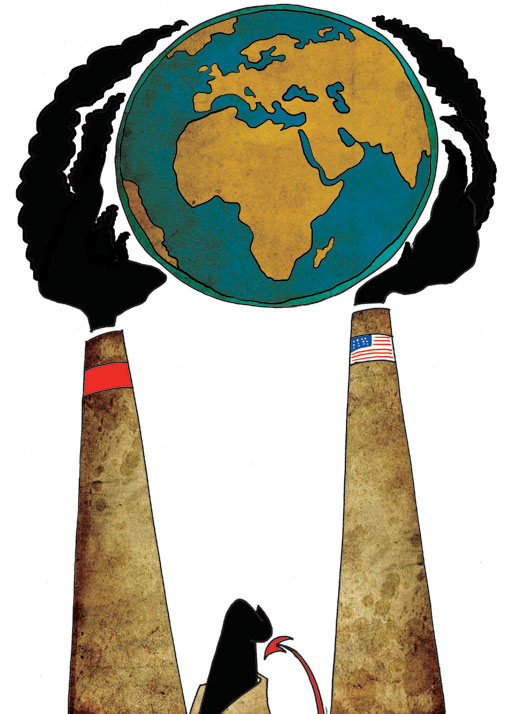 But let me start by saying that any deal that brings the world’s top two polluters to the same table is good news. Now let’s understand its implications.

China, on its part, will peak its carbon emissions by 2030 and then start reducing it. It has also agreed to raise the share of non-fossil fuels to 20 per cent of its primary energy mix by 2030. It has not, however, announced any specific emissions targets. The US has vowed to help China to “slow, peak and then reverse” its emissions.

The fine print of the deal

Under this deal, the US will do much less than what it should. By 2025, while the European Union (EU) will cut its emissions by at least 35 per cent from the 1990 levels, the US will cut only 15 per cent. In 2025, the per capita emissions of the US will still be around 14-15 tonnes, compared to 6.5 tonnes of the EU and 3.5 tonnes of India. So, the implication of this “ambitious” deal is that on a per capita basis the US will continue to emit twice as much as the EU and more than four times as much as India. All projections show that to meet the 2oC target US emissions should be at least 50-60 per cent below 1990 levels by 2025 considering its historical responsibility of causing climate change and its present capability of solving it.

So is this a coincidence that the per capita emissions and the cumulative emissions of China and US are converging in 2030? Or is this by design? If this is by design, then it is quite a convenient deal wherein the world’s top two polluters have agreed to take whatever carbon space they need and have left the remaining for the rest of the world.

But what is most interesting is that through this agreement, China has been able to get for itself an equitable deal. In 2030, China will account for 16-17 per cent of the global population and in 2030 it will also occupy 16 per cent of the carbon space.

The question is can other developing countries get an equitable deal too?

Implications of the deal

On November 12, the International Energy Agency (IEA) also published its 2014 edition of the World Energy Outlook report. The report points out that the global energy system is on a path which will lead to 3.6°C temperature rise and the world will exhaust its carbon budget by 2040.

Implications for other developing countries

From now till 2030, the developed countries and China would appropriate a large part of the remaining carbon budget. Annex 1 countries and China together would emit about 600 billion tonnes of GHGs which is 60 per cent of the remaining carbon budget from now till 2050. The remaining 40 per cent will have to be shared between the 70 per cent of the world’s population. This means that not much would be left for the billions of poor who have no access to electricity or clean cooking fuel or modern means of transportation. So what should they do?

The easiest option left to them is to be like the US and China and keep emitting and take the world to a path of 4-5°C temperature rise. But in this case it will be the poor of the poor countries who will suffer the most; the rich and the would-be rich of the developing world will find some way out like the developed countries.

There is another option. The developing countries can come together and demand their rightful carbon space. They can demand that the remaining carbon space must be apportioned based on historical responsibility and present capability. They can demand that they have the right of sustainable development and the rich countries can take more carbon space only if they transfer finance and technology for low carbon growth in developing countries. They can, therefore, reject bilateralism and push for true multilateralism.

Many have opined that there will be pressure on India to fall in line as the US and China has now announced their emission caps. I believe the opposite holds true.
India is and will remain a low-emitting country at least till 2030. In 2030, its total emissions would be about 5.0 billion tones—about 10 per cent of the world’s total. This will be similar to that of the US and one-fourth of China’s. Its per capita emissions would be 4 tonnes, which will be less than a third of that of the US and China. During 2011-2030, India will emit about 80 billion tonnes of GHGs compared to 280 billion tonnes by China and 100 billion tonnes by the US. India will, therefore, occupy only about 7 per cent of the remaining carbon space by 2030 compared to 11 per cent by the US and 25 per cent by China. If India applies the same principles as that of the US and China, then it need not do much. In fact, it can very well justify business-as-usual. So, the US-China deal reduces and not increases pressure on India.

But I believe that it would not be in the interest of India to follow the path of the US and China. It will not be in the interest of the poor of India to have 4-5°C temperatures rise; they will not be able to cope with it. But it is not in the interest of India to have global carbon budget exhausted when it needs it like other developing countries; that is post 2030. India, therefore, must now work harder with developing countries and push for an ambitious global deal which is equitable and saves the world from catastrophic climate impacts. It must push for a principle-based emissions reduction target for all countries. This is the only way the world can survive within the planetary limits.