Why we celebrate rivers

The Chong people consider the Areng River at the foot of Cambodia’s Cardamom Mountains a sacred inheritance from their ancestors. The river sustains lush forests with rare elephant, tiger and crocodile species. The Chong people fish, grow rice, and gather roots and mushrooms on the river banks. They say that piles of money could not replace their river if it were destroyed by a dam.

The Chong people are not alone in revering their river. We call our rivers Father Rhine and Mother Ganges.The Mekong, Nile and Zambezi are venerated as “Rivers of Life”. In India, rivers like the Yamuna and Narmada are worshipped as goddesses. Rivers feed us, connect us, and give us a sense of identity.This is why we celebrate them with an International Day of Action for Rivers on March 14 every year.

Scientists confirm what our ancestors knew from experience. Rivers connect land, freshwater and marine ecosystems. They host some of the world’s most diverse plant and animal communities. Rivers sustain much of our agriculture, and their fisheries nourish millions. Their sediments protect our coastlines against erosion by the sea, and pull carbon out of the atmosphere. Healthy rivers act as natural buffers that balance ever more serious floods and droughts.

We often ignore that we depend on rivers for our long-term prosperity. We are damming them, polluting them and sucking them dry. Some rivers don’t even reach the sea anymore. Between 10,000 and 20,000 freshwater species are at risk of extinction or have already died out. Because their migration routes have been cut, the survival of 24 of the world’s 26 majestic sturgeon species is threatened or near-threatened.

Rivers and other wetlands are more strongly affected by the loss of species than any other major ecosystem. Even so, they are currently faced by a dam-building boom of unprecedented proportions. No less than 3,700 hydropower dams are under construction or in the pipeline right now around the world.They include the Stung Cheay Areng Dam on Cambodia’s sacred Areng River.

From the Amazon to the Mekong, from the Himalayas to the Nile, from the Balkans to the Andes, civil society networks have sprung up to defend the arteries of our planet. They bring together farmers and fisher folk, activists and teachers, rafters and lawyers, scientists and poets. They speak up for local livelihoods, analyse project documents, block construction sites, and hold decision-makers to account.Working with activists and monks, the people of the Areng Valley have organized protests, blocked dam builders from entering their territory, and raised their concerns in the international media.

Today, on March 14, more than 120 groups in at least 38 countries again pay their respects on the International Day of Action for Rivers. They are holding protest rallies and workshops. They are organizing writing contests and dance performances. They are marching along rivers and holding kayak races. They are cleaning up rivers and occupying the offices of dam builders.They are joining hands under the motto, #RiversUniteUs.

On this day, we also celebrate the successes that our network has achieved. Together with local communities and partner NGOs, we have stopped destructive projects in Burma, Chile, China, Namibia, Peru, Thailand and many other countries. We have supported indigenous communities in Brazil, Guatemala, India, Malaysia and Panama in the struggle for their ancestral lands. We have informed dam builders from North and South that they will risk their bottom lines and reputations by building destructive dams. We have put the importance of rivers on the global agenda.

The people of the Areng Valley have so far managed to keep the dam builders at bay. Two Chinese companies have already withdrawn from the project. In late February, Cambodia’s prime minister announced that dam construction would not start until at least 2018. Yet the pressure continues, and the Chong people deserve our continued support. 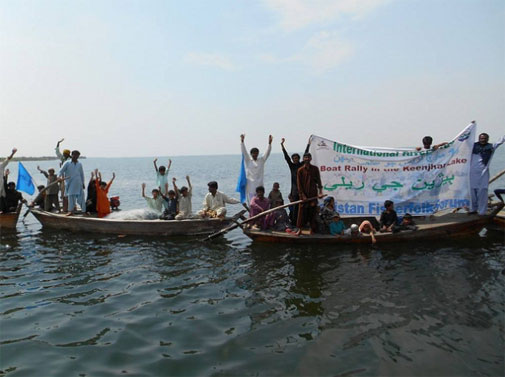 What you can do

Please take a moment to think about what you can do to protect the arteries of our planet. We can all avoid products that waste and pollute valuable water. We can educate our children about a way of life that respects the ecosystems of our planet. We can raise our voices and cast our votes to support the protection of the environment. We can get engaged in local watershed groups and support organizations like International Rivers. After all, rivers are in our hands. Thank you for your support.

Peter Bosshard is the Interim Executive Director of International Rivers. He tweets at @PeterBosshard.