Removing too many individuals, especially of a particular age or sex, can destabilise a population 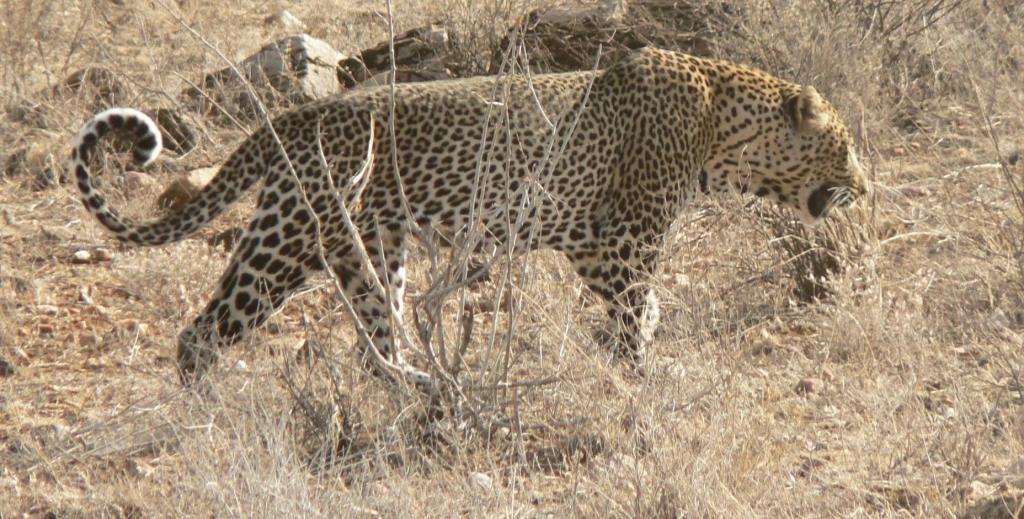 Throughout their range leopards are in rapid decline, having disappeared from North Africa, much of the Middle East and Asia. Declines have been so severe that the species is now considered vulnerable to extinction. No comprehensive estimates of the number of leopards remaining in the wild exist.

In southern Africa, 62 per cent of leopard distribution falls outside of formally protected areas. This unprotected landscape is highly fragmented by both agriculture and urban development.

Threats to leopards include habitat fragmentation, killing for fear of livestock loss and poorly managed trophy hunting. Leopards are poached through deliberate or opportunistic poisoning and wire-snaring. Their body parts are also illegally traded for traditional medicine and cultural attire.

Conservationists are concerned that these threats contribute to the overall decline in leopard numbers. Conserving leopards successfully requires us to track population numbers and trends. However, leopards are notoriously elusive and occur at low densities, which makes monitoring difficult.

Threats to many wild cat populations across southern Africa are often age and sex-biased. How these threats influence leopard behaviour is poorly understood.

Our study explored the long-term genetic costs of exploitation-driven changes in the behaviour of leopards. To do this we compared the social and genetic structure of two well-studied populations in South Africa; a protected population and one recovering from over-exploitation since 2005, where 50% of leopard deaths were human-related.

Using GPS collars, guide sightings and genetic samples, we gathered over 15 years of data to reconstruct home ranges and family pedigrees for 150 leopards across both reserves. This allowed us to examine the behaviour of related individuals over multiple generations, with and without exploitation.

Typically, female leopards establish territories close to their mothers, while males settle away from their natal range. At sexual maturity (~3 years), sons compete with surrounding males for access to territory and mates.

Often overcome by these large established males, sons are forced to disperse out of the area, creating a “genetic out-breeding effect”. By “moving out” to establish a territory away from “home”, sons avoid breeding with closely-related females.

Inbreeding at the level of sisters, mothers and aunts can have severe consequences in big cats. These range from physical defects like tail “kinks”, to severe reproductive costs and even sterility.

In both populations, we found that daughters established home ranges near their mothers. Here they benefit from the resource knowledge of their mother’s territory. In the fully protected population, sons dispersed out of their maternal home ranges, moving away from closely related females.

But in the historically over-exploited population, many young males did not disperse. Instead, their newly established home ranges overlapped with those of their sisters, mothers and aunts. Here, territory “gaps”, created by the killing of large males, allowed sons to escape competition and establish territories alongside their mothers.

The problem? Males in the exploited population stopped dispersing and, as a result, destabilised the out-breeding mechanism for this population. This increased the likelihood of young males fathering cubs with closely related females.

We found evidence of this with a father-daughter and two half-sibling mating events. Known breeding pairs in this population were also highly related, the equivalent of at least half-siblings. While the overall population was growing, it retained signatures of inbreeding despite over 10 years of recovery.

What does this mean for leopard conservation?

The risk of inbreeding in small, over-exploited populations is well known. However, few studies have the necessary long-term data to demonstrate this direct link. We show clear evidence of how exploitation can disrupt the dispersal behaviour of leopards, ultimately leading to inbreeding.

Our study is among the first to demonstrate these risks in a large solitary wild cat species. We emphasise that even “recovering” populations still carry the inbreeding “scars” of historical exploitation.

While reduced genetic diversity exposes populations to the challenges of future disturbances, including disease outbreak, habitat loss and climate change.

Increasing evidence suggests most leopard populations across southern Africa are threatened by exploitation. Long-term genetic costs should stimulate discussion among scientists, reserve managers and policymakers who aim to effectively conserve this species.

The recovery of leopard numbers in historically exploited protected areas is crucial to safeguarding the 62 per cent of unprotected leopard range from loss. Promoting movement between reserves to encourage gene flow requires suitable wildlife corridors for leopards, even through already transformed land.

Left unregulated, the unsustainable exploitation of leopards will have severe ecological and evolutionary costs. We have demonstrated that removing too many individuals, especially of a particular age or sex, can destabilise a population. By changing the social dynamics of individual behaviour and this increases the chance of inbreeding.

Population monitoring of leopards indicates that habitat loss and population declines are similar to lion and rhino. Yet their silent disappearance goes largely unnoticed due to their broad distribution and elusive nature. We have only just begun to understand and effectively conserve these magnificent cats.