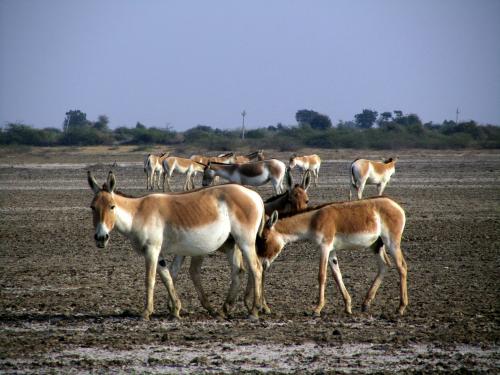 Other than wildlife enthusiasts, just how many of us know about wild asses in the subcontinent? Do we know about their distribution, their conservation status, their role in local cultures?

No. We don’t. All we know is to laugh crassly at the very mention of the word “ass”, “donkey” and “gadha” because of the status that this poor animal is relegated to in our “mainstream culture”.

That does not mean that that the wild ass is a creature to be laughed at. In fact, it is one to be admired. Few animals can match the beauty of this animal galloping in the deserts of Kutch or Ladakh. It is a beauty that cannot be described in words. It has to be felt. Also, it is the only species of its kind that can live in extremely hostile environments like the Little Rann of Kachchh, where temperatures reach more than 50 degrees Celsius.

But we don’t understand all that. Nor do our elected leaders. Even one like Akhilesh Yadav, incumbent Chief Minister of Uttar Pradesh, who has at least some knowledge of wildlife (or the lack of it). After all, wasn’t he the one who proposed a “lion safari” at Etawah and also worked for Saurus cranes?

On February 20, at the height of the election campaign in his state, he used the Indian Wild Ass or “ghudkhar” to score brownie points against his political opponents (you know who). Agreed, he used the word “gadha” as a veiled reference for his opponents. But his language again reflected the bias and discrimination that South Asian culture, like so many cultures around the world display towards the humble ass.

However, we should take Mr. Yadav’s comments in a positive way. After all, it is not every day that you see an endangered animal become the topic of primetime news like it became on February 20.

Yes, the Wild Ass is endangered (bet you do not know that too). According to the Red List of International Union For Conservation of Nature (IUCN) released in 2015, the Indian wild ass (Equus hemionus khur) has been classified as an endangered animal.

At the time (in 2015), the IUCN had added that the population of the Asiatic wild ass or Onager, of which Indian Wild Asses form a substantial number, had declined by an alarming 52 per cent in the past 16 years. In Gujarat, there are 4,451 wild asses as per the 2014 census. In 2004, their number was 3,863. So while Gujarat has recorded a 10 per cent rise in numbers, the animal itself remains on the brink. In fact, experts warn that a few bad drought years in a row would be all to diminish its population in one stroke.

Wild equids (members of the horse family) the world over present a mixed picture. While their domesticated cousins are thriving after having been bred over thousands of years by man, wild horses, asses, zebras and feral horses are fighting hard to survive in today’s world. Some like the Syrian Onager are extinct while the Persian Onager is fighting for its life (Just 600 individuals remain in the wild). But there are success stories too. The Takhi, the Mongolian Wild Horse has come back from the brink and now has a stable population in its home range. The Tibetan Wild Ass or Kiang (found in Ladakh, among other places) is doing well for itself too. Feral horses like North America’s Mustangs and Australia’s Brumby are thriving too although the discourse in their case, like in other wild equids is about inter-breeding  with their domestic counterparts and thus losing the purity of the gene pool.

In our present-day world, where despite the proliferation of knowledge through technology, there is a large vacuum among people about the bio-diversity around us, coverage of any animal, even if it were for a small period of time (like the evening of February 20 for the ghudkhar) is welcome. Species like Ghudkhar usually lose out to megafauna like rhinos, tigers and elephants in conservation coverage by popular, mainstream media. Hence, no matter how foolish Akhilesh Yadav’s statement about Gujarat’s gadhas might sound, I welcome it nonetheless.