Avni, the Yavatmal tigress, died because she was caught in the crossfire of people's expectations from the government and the pretence of action by politicians 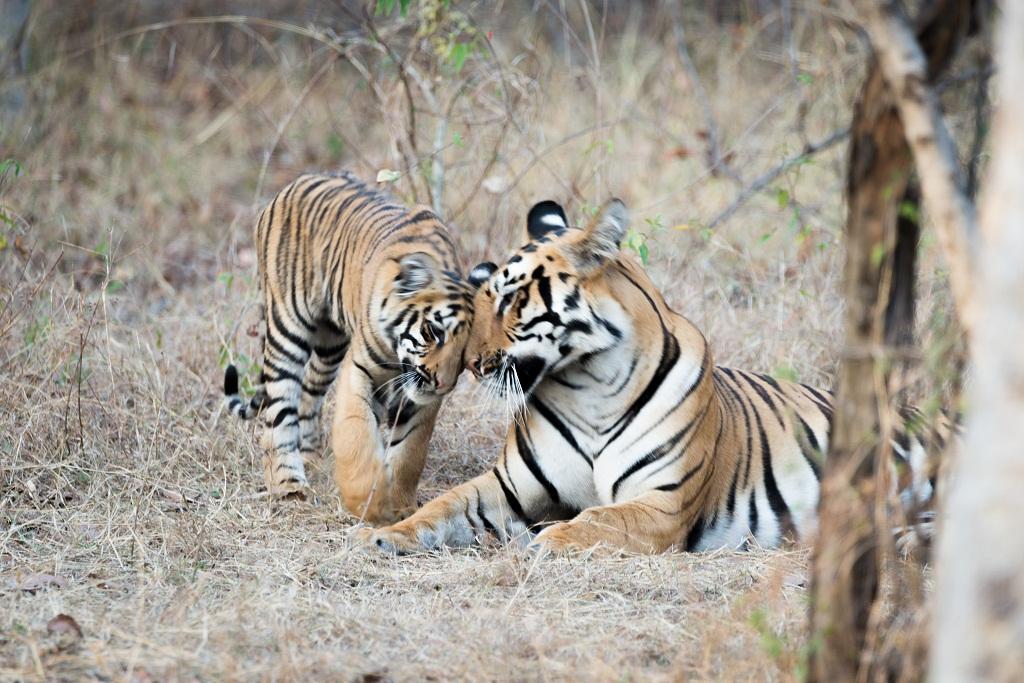 A tigress and her cub Representational photo Credit: Getty Images

Man-animal conflict is on the rise as the last remaining species are fighting back for survival— much like the brightness of a candle flickers a little harder before it dies. Monkeys, elephants, tigers, blue bull, wild boar, even birds, seem to have become a cause for human inconvenience. It is a battle the animals must lose, never mind fair play. All pretenses of justice, fair play and ahimsa are dropped when it is Humans Vs Animals. Science is forgotten, compassion is buried alive and logic is twisted as per convenience.

The poaching of tigress T1 of Yavatmal, Maharashtra, named Avni, was as unfair as it was illegal. However, since the illegality was carried out at the behest of the top-most political masters in the state, who shall prosecute them? The tigress did not have to die for turning man-eater—that conclusion was never reached in any scientific manner by any scientific agency. She died because the political masters needed a diversion from the farmers' suicides that they could do nothing about, except doubling them. She died because the state government was eyeing her habitat, to set up another Special Economic Zone. She was caught in the crossfire of people's expectation from the government and the pretence of action by the politicians.

This is neither the first nor the last time law has been bent, twisted and broken, for one politician to divert the attention of his voters and appear to do something. Wild animals often get hunted to make cowards look like heroes. In most European and African countries, hunting is legal. Consequently, a majority of the wildlife on both continents has been killed. Indian governments face some hurdles of law before they can get wild animals out of the way of the development agenda. The objective of bringing in the Wildlife (Protection) Act, 1972, was to protect and conserve wildlife and ensure scientific management of sanctuaries and reserves. However, the Act is conveniently used against this objective, when a politician requires it as a gimmick.

In the case of the Yavatmal tigress, the removal of conflict was not the objective. Blood had to be spilt for the event to divert the attention of the peasantry towards the heroism of the state government in defence of poor farmers. When a team of scientists/ veterinary experts from the Wildlife Institute of India arrived in Maharashtra earlier in October, no support was provided to them, but repeatedly and consistently, the poacher, Shafat Ali Khan enjoys political patronage despite documented illegal usage of assault weapons, wildlife trade, encroachment and fraud.

Just to cite one illegality, serious breach of the provisions of Section 30 (b) of the Indian Veterinary Council Act 1984 was observed, as the order to tranquilise the tigress and her cubs has been entrusted to a person who was not a registered veterinarian. Absurdly, the shooting has been claimed to be done from a distance of 8-10 metres away from the tigress. No veterinarian was present on the spot and it seems very unlikely that the shooter may have had time to dart the animal and wait for the drug to work. The whole exercise, as reported, seems to be extremely unscientific and illegally conducted.

This incident does not stand alone, but is one of a whole deluge of incidents where wildlife has been eliminated for socio-political reasons, almost all stemming from the growing population of and growing consumption by humans. This cycle will only end when we have killed every last wild animal, some for food, some for trophies, some to eliminate threat and some for no reason at all. Then, the governments will find other distractions, for the peasantry to keep them in power. When India could afford to give a miss to the Global Air Pollution Summit, to inaugurate a metal statue, the signal is clear. Nothing is sacrosanct anymore. A mother, a national animal was shot dead by a known criminal under political patronage. What lower depths can we sink to? What can be a more dastardly demonstration of apathy? What can put science and compassion to more shame?

(Gauri Maulekhi is a trustee of the animal rights group, People For Animals (PFA). She is also a consultant with Humane Society International, the world's largest animal protection group)