If India’s laws do not adequately punish those who commit sexual assault on animals, they may move on to unleash their cruelty on humans too 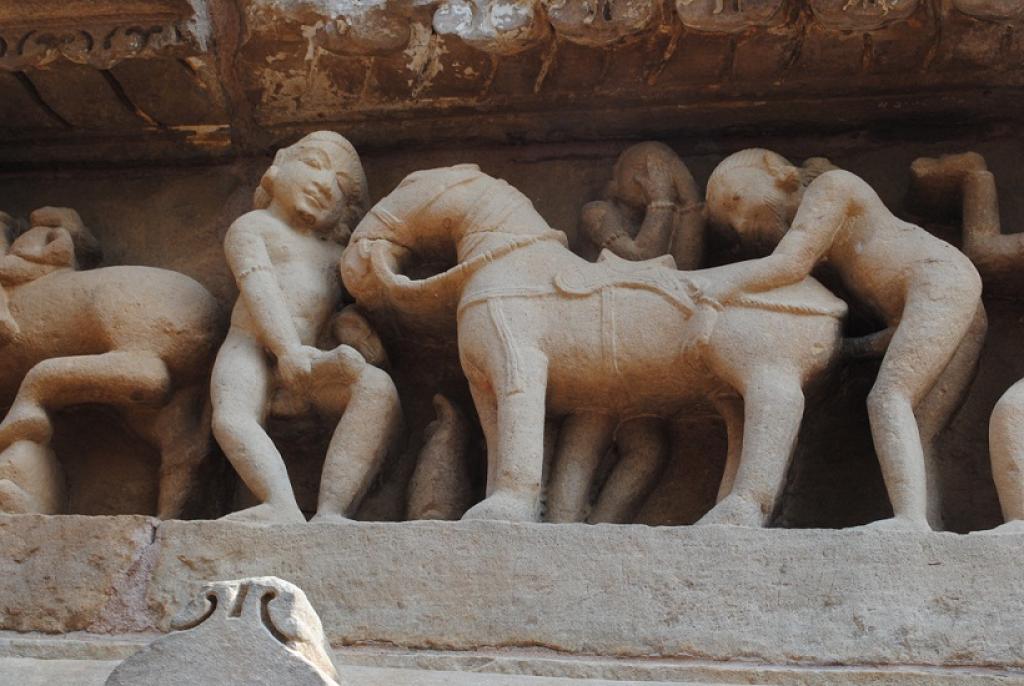 (A man having intercourse with a horse, pictured on the exterior of a temple in Khajuraho              Credit: Wikimedia Commons)

The debate surrounding Section 377 of the Indian Penal Code, which makes it illegal to have intercourse "against the order of nature", has rightly forced the nation to consider the sexual human rights of consenting adults. Section 377, however, while being understood to criminalise same-sex sexual relationships, also makes bestiality—the sexual assault of an animal by a human being—a punishable offence, which is a vital animal-protection measure that we must retain. For if we fail to protect animals from abuse, we will also fail to protect humans. That is why PETA India has requested that the Union Ministry of Home Affairs and the Union Ministry of Law & Justice to retain the criminalisation of bestiality under Section 377 while amending the current wording to decriminalise sexual acts between same-sex human partners and between other consenting adults.

Just within the last month, a First Information Report was filed against eight men for gang-raping a pregnant goat to death in Haryana, and a man from West Bengal was arrested under Section 377 for dragging a stray dog into his house and raping the animal. Horror stories of humans raping dogs, goats, cows, and other animals already appear in our newspapers, and if India's laws no longer adequately punish these unsettling crimes with the severity they demand, the unchecked deranged individuals who commit them may move on to unleashing their cruelty on humans, too.

The link between hurting animals and hurting humans is indisputable. In a study of domestic violence victims, 80 per cent of women said that their abusive partners had been violent to their companion animals. According to Robert K. Ressler, who developed profiles of serial killers for the US Federal Bureau of Investigation, "Murderers … very often start out by killing and torturing animals as kids," including Nikolas Cruz, who is suspected of shooting and killing 17 people at a US high school last February.

Repeat crimes among animal abusers are the rule rather than the exception. In fact, a US study by Northeastern University and the Massachusetts Society for the Prevention of Cruelty to Animals found that people who abuse animals are five times more likely to commit violent crimes against humans, and a Yale University researcher found that a staggering 80 per cent of convicted violent criminals have histories of hurting or killing animals. One study conducted for over 21 years found that 70 per cent of people who abused animals went on to commit other crimes, approximately two-thirds also assaulted a human, and 100 per cent of those who were guilty of sexual homicide, had a history of cruelty to animals.

For example, Ameerul Islam—who was accused in the infamous Jisha murder case in Kerala in 2016—raped and killed dogs and goats before he was sentenced to death for raping and murdering the law student. Convicted criminal Joseph Bateson of Northern Ireland—who allegedly engaged in sex acts with farmed animals—was found guilty of 17 counts of gross indecency with a child and indecent assault after he sexually abused a 6-year-old boy. American criminal Jerry Cook was convicted of cruelty to animals as well as assault and battery following an incident in which he raped a dog—killing her—and attacked the owner of a home he was burglarising. His history of violence had begun nearly two decades earlier when he was convicted of first-degree rape.

To combat this link in order to safeguard everyone, India needs ironclad animal-protection laws that are properly enforced, including ones that criminalise bestiality. An American study found that 96 per cent of offenders who had engaged in bestiality also admitted to committing sexual assaults on humans. Experts agree that it is the severity of the behaviour—not the species of the victim—that matters. That is why the vast majority of Western countries, including Australia and nations in Europe and North America, criminalise bestiality and seriously prosecute offenders.

It is imperative that India's government continue to protect animals from sexual assault by keeping bestiality criminalised under Section 377 and by preserving the wording that makes the crime punishable by up to 10 years in prison. Our nation's chief animal-protection legislation, The Prevention of Cruelty to Animals Act, 1960, also needs to be amended to include bestiality as a cognisable offence and to introduce stronger penalties for cruelty to animals. Not only will this safeguard India's animals—who are revered—it will also protect our beloved citizens.