Do elephants grieve? Maybe, though not in the ‘human’ sense of the word 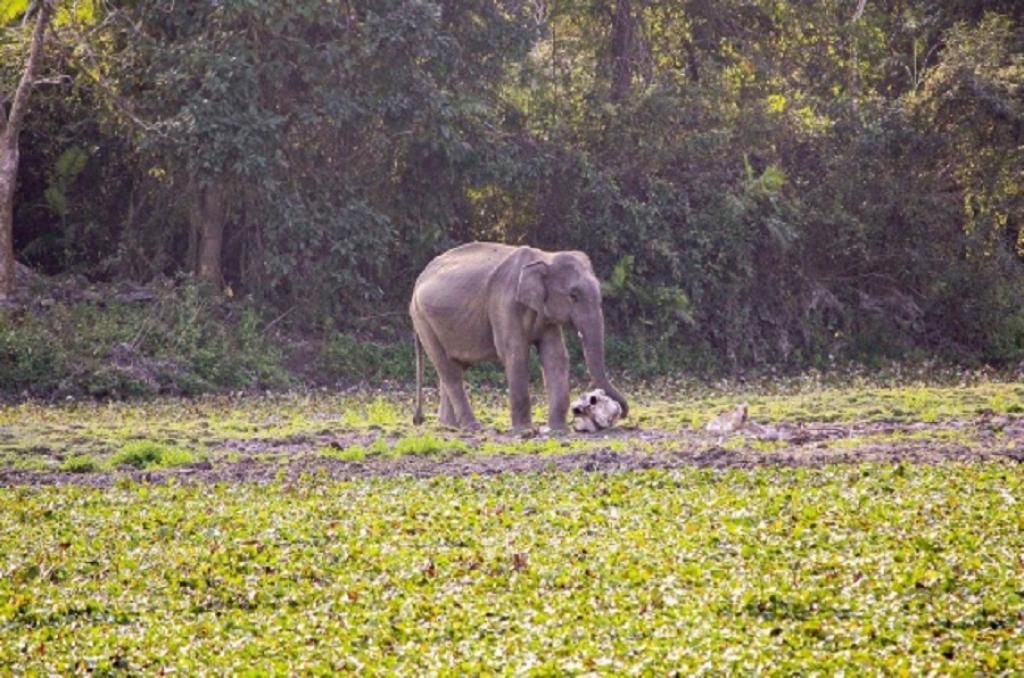 An adult male elephant caresses the remains of another male in Kaziranga National Park, Assam

Human grief is often described as a natural response to the loss of someone or something that’s significant. We may feel a variety of emotions, like sadness or loneliness. But can such emotions ever be experienced by non-human animals as well?

We feel an inexplicable connection with large, charismatic mammals such as the elephants. There may be several reasons behind this, such as their intelligence, playfulness and closeness to family. However, a trait that stands out in particular is their capability of experiencing complex emotions, such as grief.

Numerous instances have been recorded across the world wherein these gentle giants were found to react when coming across the remains of other elephants, regardless of the strength of relationships they might have shared with the deceased individuals.

Some caressed the remains by touching them gently with their trunks and feet, while others smelled and tasted them and even attempted to lift and carry them around. Interestingly, some elephants have been found to carefully cover the bodies with soil, leaves and branches, almost as if performing burial rituals.

Studies have also suggested that certain elephants specifically visit the bones of their deceased relatives. However, the common aspect in all these incidents is the eerie stillness of the elephants while inspecting the remains.

In elephant researcher Joyce Poole’s words, “It is their silence that is most unsettling. The only sound is the slow blowing of air out of their trunks as they investigate their dead companion.”

When a 55-year-old matriarch, Victoria, passed away in June 2013 at Kenya’s Samburu National Park, several elephants, related and unrelated, came and huddled around her body. Ecologist Shifra Goldenberg observed that Malasso, Victoria’s 14-year-old son, was one of the last to leave.

On a later observation of Victoria’s remains, two fresh cuts were found, one in her cheek and the other at the top of her mouth, both of which seemed to have occurred after death. Goldenberg explained, “We think possibly [Malasso] tried to lift her, because he has these long tusks.”

Another elephant that lingered near the body was Victoria’s youngest daughter Noor. When she finally left the remains, liquid was streaming out of her temporal glands, a reaction that has been associated with fear, stress and aggression in African elephants.

Like their African counterparts, Asian elephants too have been found to experience distress in response to dead or dying individuals.

An important aspect which may shed some light on these happenings is that both African and Asian elephants form strong social bonds and complex social structures, characteristics which scientists have often pointed out to be existent in highly conscious living beings.

Elephant interactions being essential for the passing down of knowledge through generations. Hence, some researchers suggest that elephants inspect their dead in an attempt to glean important information through touch and smell, which could aid in their own survival.

In particular, matriarchal knowledge may prove to be critical to the survival of individuals. Social relationships and consequently social communication, therefore play a crucial role in an elephant’s life and may thus significantly impact the elephant’s interactions even during and beyond death.

On January 17, 2020, a day when we were observing elephant behaviour in the Kaziranga National Park, around early evening we came upon an adult male elephant who stood still for a long time, caressing the skull of a deceased elephant.

He then also tossed around with his feet what seemed to be pieces of leftover skin from the ears of the dead elephant. During our prolonged observation, he did not feed or drink despite both food and water being easily accessible in his immediate surroundings.

His tail was frequently raised, a behaviour commonly seen in disturbed Asian elephants. He would attempt to move away from the remains yet keep coming back to them every time as if strangely drawn to them. Subsequent discussions with the Park staff revealed that the deceased elephant had also been a male, suspected to have died of natural causes.

The question then remains: Can we really say that elephants grieve? In an attempt to answer this, we could perhaps turn to anthropologist Barbara J King’s definition of the emotion: “To qualify as grief, surviving individuals who knew the deceased must alter their behavioural routine. They might eat or sleep less, or act listless, or agitated. They might attend their friend’s corpse”.

Grief in itself may mean something different to each individual, but according to Charles Darwin, there is a certain universality to it that may potentially connect us and our mammalian relatives.

We may not be able to determine as of now whether elephants “grieve” in the human sense of the word, but some things are certain: Elephants display a significant interest in their dead and their behaviour in such situations is markedly different as compared to that under normal circumstances.

Can they comprehend or anticipate death? Do they mourn? Or are these complex ways of responding to death that are beyond our current understanding? All of these are things we are yet to decipher.

“Witnessing elephants interact with their dead sends chills up one’s spine, as the behaviour so clearly indicates advanced feeling,” said elephant researcher George Wittemyer. “This is one of the many magnificent aspects of elephants that we have observed, but cannot fully comprehend.”

The apparent emotionality and the wide-ranging individual differences in the responses of elephants to their dead do indeed deserve further study. It is hoped that such endeavours in the future would conclusively reveal the answers to the long-debated questions which surround them.

The authors are associated with the Elephant Acoustics Project