Rural communities in the developing world usually rely on ecosystem services such as food, fuel, fodder, traditional medicine from forests to fulfil their subsistence needs, generate cash income as well as to create livelihood opportunities.

In the Himalayas, the reliance of local communities on the environmental goods and services is high as other livelihood opportunities such as farming are limited due to steep terrain, remoteness and low productivity of the land.

Historically, local rural households in the Himalayan region collect non-timber products (NTFPs), including medicinal plants, and trade them in cities in lower areas. Trade and collection of ‘Himalayan Gold’ — caterpillar fungus has become extremely popular in recent decades, surpassing all other species in terms of revenue.

Caterpillar fungus (Ophiocordyceps Sinensis) is a fungal parasite of larvae (caterpillars) that belongs to the ghost moth. It is endemic to the Tibetan Plateau, including the adjoining high Himalaya (3,200-4,500 metres above sea level).

For centuries, caterpillar fungus has seemingly been used in traditional Tibetan and Chinese medicine as a tonic, as a therapeutic medicine for lung, liver and kidney problems.

In recent time the species has been widely traded as an aphrodisiac and a powerful tonic, often called the ‘Himalayan Viagra’. There are also reports that caterpillar fungus possesses a range of more specific therapeutic properties; including action against asthma and bronchial inflammation, cure of renal complaints, irregular menstruation and stimulation of the immune system.

Harvesting of caterpillar fungus starts at the beginning of May and lasts till the end of June. The collection period, however, depends on factors such as weather, snow cover on the pasture and elevation of collection sites.

Harvesters work hard and the work is considered particularly strenuous; but the enterprise is highly profitable. When the caterpillar is initially dug out of the ground it is concealed in dirt, and the best way to remove this layer is with a toothbrush. During the cleaning process, careful consideration must be taken not to damage or break the caterpillar fungus. After drying in the shade, the species is ready to trade; harvesters have to store it in a dry place to avoid any contact with moisture.

Due to the scarcity of resource and high publicity, both demand and price of caterpillar fungus have increased sharply, causing competition among harvesters and traders who have become astute to the commercial potential of the species.

Recently a research paper published in Oryx – The International Journal of Conservation, Yartsagunbu: transforming people’s livelihoods in the Western Himalaya reports that the market of caterpillar fungus has changed considerably over the last decade.

The mean annual buying price by local traders in villages of the Nanda Devi Biosphere Reserve has increased steadily from approximately $4,700 (Rs 3.3 lakh) per kilogramme in 2006 to more than $13,000 per kg in 2015.

Owing to the surge in demand for this ingredient in the last decade, local people have been gathering a greater quantity of caterpillar fungus over the high-altitude expanses in upper Himalayan regions, and this activity has become one of their most prosperous sources of income in the region.

The illegal nature of the trade, coupled with rampant overexploitation, severely threatens the survival and sustenance of this unique resource, and its habitat — also home to the elusive Snow Leopard and rare high-altitude fauna.

The above-mentioned research was conducted by a team in 32 villages in Dhauliganga Valley, Nanda Devi Biosphere Reserve, in western Himalaya. Its findings suggest that as harvest of caterpillar fungus and the black economy around it caught pace in the last decade, there is a decline in its natural availability.

More than 82 per cent harvesters reported that the fungus has become less abundant. The annual mean per capita harvest has declined by almost 54 units per year during 2010 to 2015.

Illegal trade of caterpillar fungus from the Indian Himalayas is a significant issue. A recent study of TRAFFIC – the wildlife trade monitoring network, highlighted that smugglers involved in trafficking of illegal wildlife products are sometimes engaged in simultaneous smuggling of caterpillar fungus using the same modus operandi and trade routes. 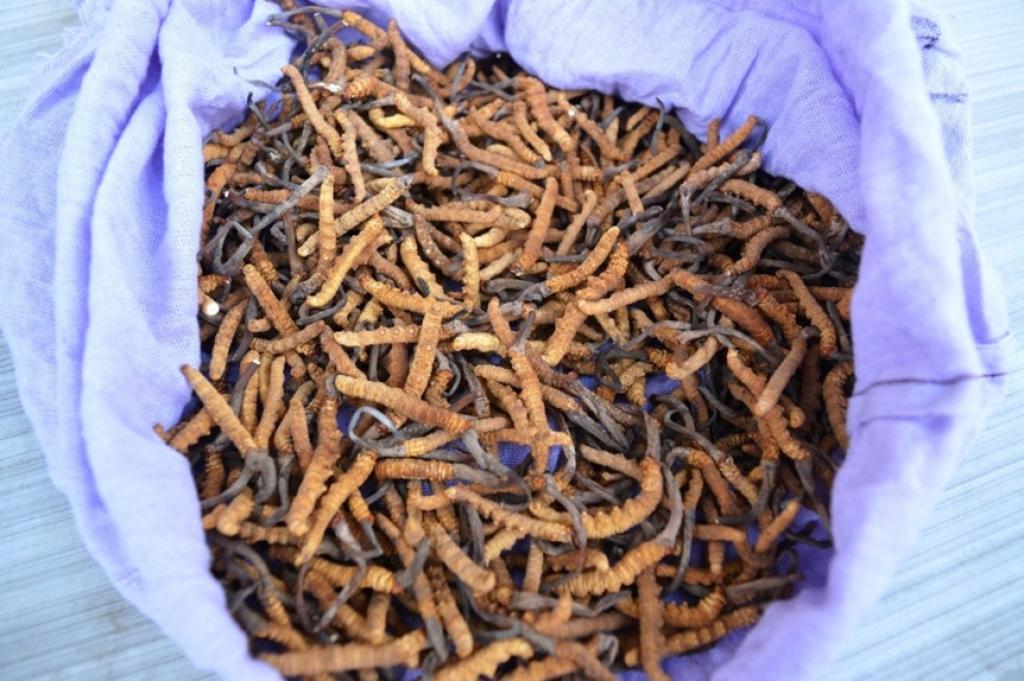 The study, Yadav et al 2019 found that proportional contribution of the income from caterpillar fungus trade in household’s cash income was around 74 per cent in 2015; it surpassed other sources such as forest products, seasonal labour, agriculture and livestock.

Thus, the income derived through the collection and trade of this precious fungus has led to enhanced empowerment of rural dwellers living in extremely remote mountain pockets. Earlier, these communities survived only through pastoral and agricultural activities.

A study supported by the Conservation Leadership Programme and Rufford Small Grant found that now harvesters spend more time in meadows to collect caterpillar fungus. The lure of easy money has resulted in aggregation of enormous ecological threats for the species in the landscape and leading to a sharp decline of caterpillar fungus from its natural habitat.

Due to legal ambiguities, caterpillar fungus’ harvesting and trade are marred with risks. There is also a lack of awareness among the local people about the sustainable use of the resources and alternative livelihood opportunity that pertains to the increasing dependency on caterpillar fungus.

Rampant exploitation and implementation of scientifically sustainable harvesting should be regulated in order for the survival of the species and to conserve pristine alpine meadows. The studies conducted in this regard note that there is a clear need for strengthening the policy measures, to manage the fungus sustainably, assimilating features of conservation, livelihood security and good governance.

There is a necessity to explore alternative livelihoods in tourism, local handloom enterprises, animal husbandry and sustainable collection and marketing of other NTFP species.

The studies also highlight that sustainable harvesting and equitable trade of caterpillar fungus may play a key role in increasing investment for education, improving food security and alleviating poverty of the local communities in the region.