The villagers neither consider these giants as threats to their lives nor a disturbance. They just enjoy their presence instead 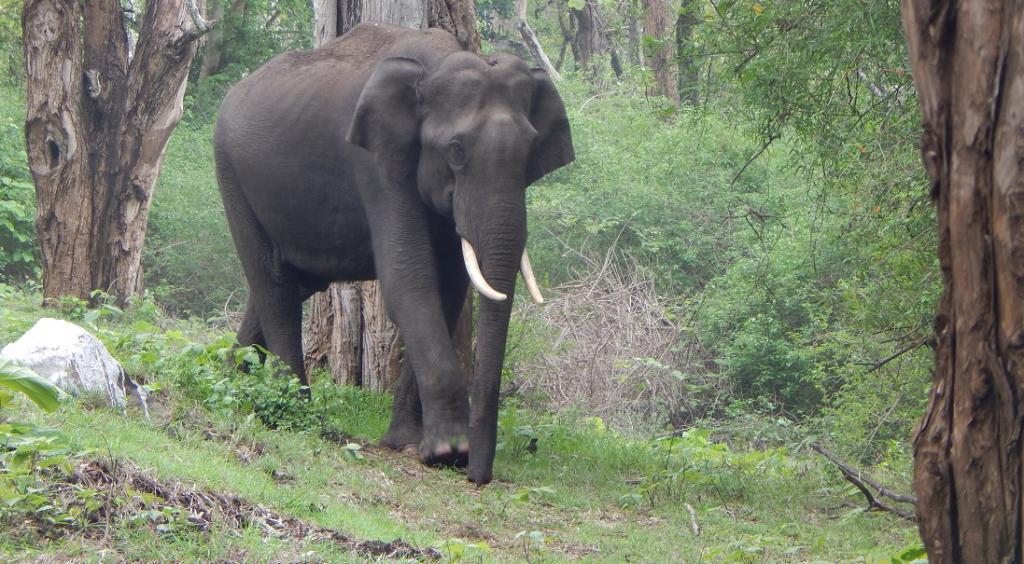 “It was dark, possibly after 12 am. I was sleeping in my house and that is when I heard it. Someone was knocking my door. The darkness was intimidating but then I regained my confidence and opened the door to see an elephant,” says an excited octogenarian, referred as Yaanai Paatti (Granny who is close to elephants) by the villagers at Anaikatti, Coimbatore, Tamil Nadu.

“I did not expect an elephant at my doorstep. It was shocking and exciting at the same time. It was knocking the door like a person, politely,” she added with an impish smile and continued, “I took my phone, dialled one of my neighbours and informed her about the situation. She was thrilled and rushed to the spot with all her friends. You know what they did? They watched!”

But if you talk to villagers, you will get a different story as mentioned above. I have been to Anaikatti recently, where I interacted with one of the tribes — the Irulas — whose stories about human-elephant conflict were not scary as they found elephants adorable and amusing.

Human-animal relationships are crucial in understanding certain cultures. The relationship is quite complicated, especially in forests. The way we see or pursue them is completely different from how people residing in such areas do so.

Yaanai Paatti, an energetic octogenarian, is a goat herder from Anaikatti. She climbs a hillock with her flock in the morning and comes back at noon or a little later. She knows every nook and cranny of the hillock and can easily sense any wild animals’ presence.

“You can feel elephants from a distance just by their smell,” she states and continues, “I mostly spot them from the top of the hillock and alert the villagers once I am back.”

Anaikatti and its surrounding areas are an active elephant corridor. While on their journey to south Tamil Nadu near Tirunelveli, elephant herds enter various human habitations, mostly for rice and sugar.

Anaikatti and its surroundings are visited by elephants on their way south. Photo: Gowthama Rajavelu

The villagers do not see it as a nuisance but adore the animals, instead. “Whenever we hear that the elephants have entered our village, we get excited. In fact, we gather in a place not-so-close or not-so-far from the animals so that we get to watch their settai (mischief).”

They particularly used that word ‘mischief’ which clearly indicates their closeness to the animals. “Once, an elephant entered our village. After a lot of search, it could not get anything. You know what it did? It just kicked the drum and left.” An exhilarated young girl showed me the drum that has a little bump on the surface, while others giggled.

The villagers even name these animals and identify them by their physical characteristics. There was a famous story about an elephant named Chinna thambi (‘little brother’ in English). It was reported by media to have plundered the village for months, damaging roofs and windows and looting food.

However, the villagers adored the animal. “He only takes food without disturbing anything else in the house,” one of the villagers who claim to have seen the elephant up close, said. The villagers even erected a poster for him and appealed the forest department to leave it in peace as they were trying to capture the elephant and make it captive.

There were various stories about the elephant intruding into their village, breaking vessels / utensils and foraging the grounds where they went with their goats. But the common elements in all the narratives were humour. The villagers neither consider these giants as threats to their lives nor a disturbance. They just enjoy their presence instead.

“The forests are healthy because of them and if they are healthy, so are we. We need to learn to live together in peace. With all these electrical fences, crackers and noise, I don’t think that is possible in the near future,” says an elderly person from the village who has seen elephants and leopards up close in his life.

Gowthama Rajavelu is an educator working in elementary education