The country should put more emphasis on educating people and changing their attitudes, so that a doubled tiger population can thrive with lesser repercussions

On July 29, the world will celebrate the tiger. India, on its part, is gearing up to declare its latest estimate of tigers, striving to hit the double-mark by 2022 — a commitment it made at St. Petersburg, Russia, back in 2010.

But while India is set to increase its tiger numbers, despite tiger habitats dwindling due to human encroachments and poorly planned development projects, the interface between tigers and people who live alongside them has never been worse.

Take for instance, the video that surfaced recently of a tigress being surrounded by an angry mob pummelling it with relentless blows, adjacent to a tiger reserve in northern India. She died in a few hours, and ripples of uproar resounded amidst the conservation and welfare fraternity.

Comments about civility, and the violence unleashed on the tigress, flooded the media. Blame was not far behind. The forest department was criticised for inaction, and the villagers for inhumanity. Questions regarding what should be done followed. Many wondered. But there was no consensus.

Such incidents unfortunately are neither new nor surprising across the tiger range states of India. And there is a sense of inevitability about the situation. It is important to remember that the distinction between the wild and the civilised is an artifice. The wild is the true natural, and the wild does not recognise human-made boundaries — of protected zones, states or nations.

Invariably, in a majority of these cases, local people attempted to mob and lynch the animal involved or agitated against the forest department. The inevitable reality is that with better protection and conservation measures inside tiger reserves, such conflicts are bound to increase further, since tigers will multiply and spill out of the frayed borders of their protected homes, into human territories.

But such an increase in the frequency of conflicts leads to greater local antipathy towards the species, hampering all efforts to conserve tigers and their habitat.

To prevent or reduce such public animosity towards tigers, it is imperative to impart more serious and concerted attention to human-tiger conflicts.

It is also perhaps time to shift our focus on what is causing the conflict on the ground, moving beyond attacking the forest department for its inaction or lack of capacity, or citing ultimate causes such as loss of forest cover or their increasing degradation, at the very instance of conflict that is reported.

For instance, in Uttar Pradesh itself, the gross forest cover of its tiger reserves has not shrunk, at least over the last several years. And on numerous occasions of conflict, the combined timely action by forest department and civil society agencies averted tragic incidents like that of the tigress. Why then do such incidents still occur?

For me it is simple: When humans and tigers come face to face, tigers are perceived as a serious threat to humans and their livestock (and with good reason, for tigers do tend to attack and kill both livestock and humans).

Imagine a situation: a village, town or city, where tigers roam the streets freely. If this is a possibility to you, or a situation that India can strive towards, then consider what we have learned from our stray dogs.

Why is it, that some of us would still like stray dogs to roam free near our homes, despite the frequent cases of dog bites — some of which reportedly prove fatal for children? Why don’t we lynch a stray dog, or have them culled?

It is because we know what dogs are, their behaviour and ecology, and understand that such adverse incidents are relatively rare. We thus empathise with stray dogs, and deeply believe that killing individual stray dogs will not resolve the problem.

We also understand that potential risks from dogs can be tackled through prevention of open garbage disposal or serious management of landfills, to prevent formation of aggressive feral packs.

But then are people who do not understand such things to be blamed? or be labelled as ignorant folk, for wanting the risk from stray dogs removed from their lives?

Similarly, for tigers, if the country wants to preserve tigers for our future generations, and for the well-being of the last strand of pristine ecosystems that they live in, we must look beyond blame games and slandering, and work in a concerted manner to tackle the one aspect that leads conflict situations to arise in the first place. That is the lack of accessibility of information and education regarding tigers, wildlife, or the ecosystem itself, to the people who face such situations every day.

People who face tigers regularly either in the forest or on its fringes are clearly aware of the lethal potential of tigers — if not as a prized flagship species then as a lurking lethal beast. And this frightens people, driving them to react dramatically when they do chance upon one. Fear breeds aggression. Such reaction is primeval, and instinctive.

It is important to understand that majority of people living beside tiger reserves, live simple lives, living mostly of the land, a few livestock, and some forests produce. Most also lack an opportunity for quality formal education. In their homes, every pair of hands is an essential bread earner.

Losing a cow or buffalo is a matter of grave concern. And when a family member is lost, it may well put the entire family’s well-being in jeopardy. Such losses gradually creates a sense of animosity towards the adversary — the tiger — transforming it into the public enemy.

Perceptions, once formed, are often passed down generations. This is further compounded by the deep chasms created by years of exclusionary conservation approaches, which detached local people from the wild. The enforcers of these approaches, the local forest department also followed suit — viewed as an aide to the enemy.

Therefore, today, when tigers and humans have face-offs, it is not just the anger towards the animal, but also the resentment towards the forest department that drives such interactions towards violent ends. 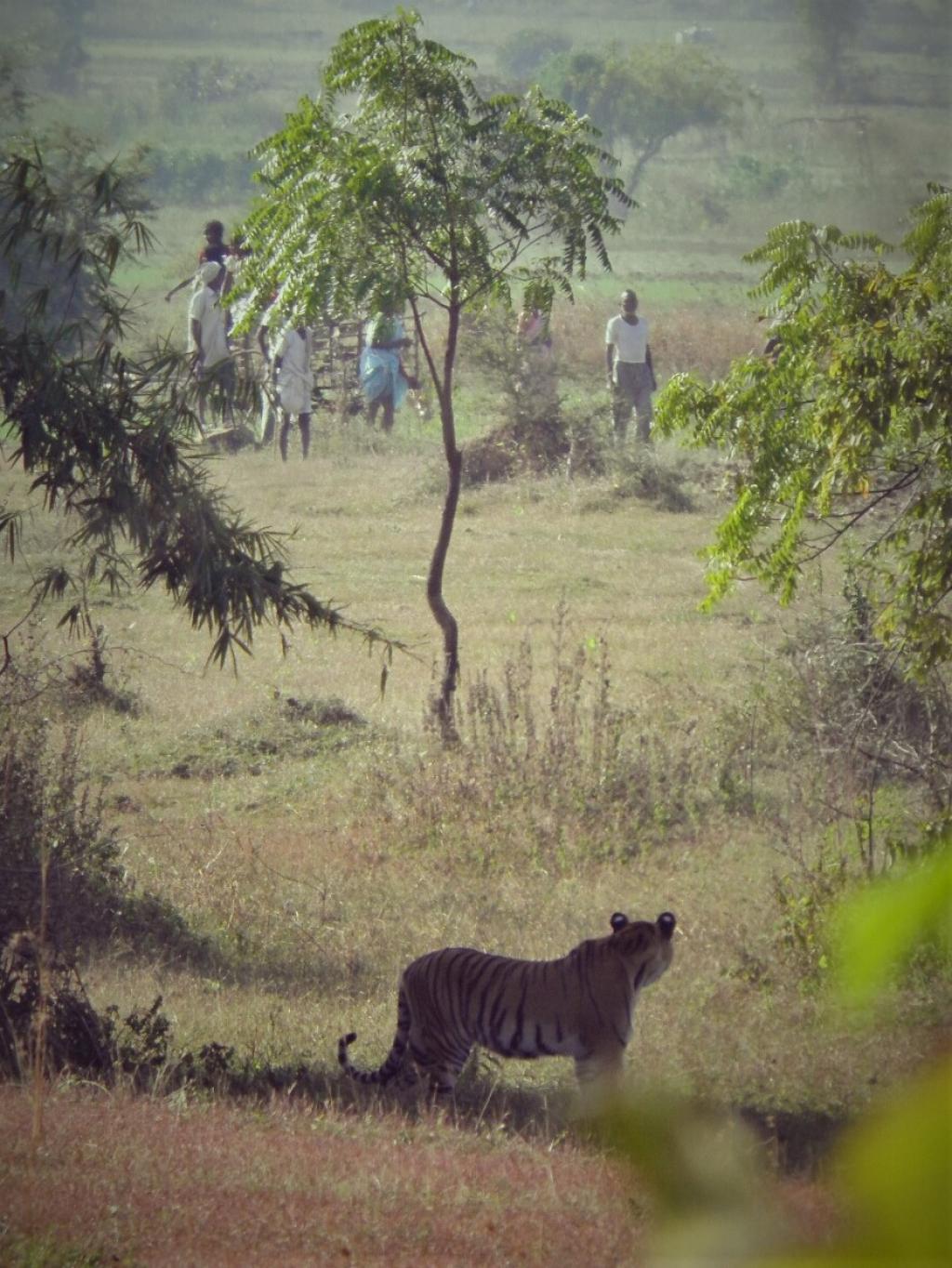 A tiger and people stare at each other in Maharashtra's Tadoba-Andhari Tiger Reserve. Photo: Abhijeet Sanjay Bayani

Imagine a scenario where a tiger walks into the vast expanse of an agricultural field abutting a village. The tiger is spotted by people and they quickly gather to get a glimpse and keep a watch too but are wise to keep a safe distance and avoid harassing or mobbing the animal.

They keep their livestock in predator-proof corrals, and they also rarely venture into forests. When they do, they go in taking all precautions, and well-armed with knowledge of wild animals’ behaviours, and how they are to walk out of unscathed from an unprecedented encounter with one.

Now, the people keep a distant vigil on the whereabouts of the tiger and the tiger also senses that people know where it is, thus finding prey here may be a difficult task. It slinks away back into the forest.

Should it be those rare occasions, where an unanticipated encounter turns fatal and a human dies, people understand the accidental nature of the encounter. Instead of agitating, they indulge in only positive dialogue with the department to fine-tune or upscale certain preventive measures to prevent such encounters from repeating and ensure full cooperation from the community to abide by all precautions themselves.

This is the utopian picture we would like to see as an ultimate solution to human-tiger conflicts. Although this may appear to be an unachievable dream in today’s India, we need to acknowledge that this is not too far-fetched from a reality that existed in most of the tiger’s distribution range in India.

Several forest-dwelling ethnic groups in India indeed lived alongside wildlife for eons, with great in-depth knowledge of the behaviour and ecology of various animals that they co-inhabited with. And although a few dramatic interactions would have occurred even then, a profound respect and acceptance for their wild counterparts was deeply embedded in their cultures.

Take the Idu-Mishmis of Arunachal Pradesh for instance. To this day they revere the tiger, considering them to be 'their brothers'. They equate killing of a tiger, to killing a family member, and this bond has protected tigers and their habitat in that far corner of the country.

The bond with the tiger and the land that they both thrive in is so strong, that they have today taken a unified stand against declaration of their forests — which they have protected for generations — as a new tiger reserve, to be managed and governed by the state.

Why can’t people who are less accepting of tigers and their well-wishers, be converted? I believe this to be a very possible prospect. Perhaps we can learn from the continuous awareness drives to stop open defecation, that the country so effectively has run for decades now?

Using every possible medium, this mass awareness drive has taken the message to far corners of the country, resulting in dramatic shifts towards use of toilets and proper hygiene practices. Can then not passionate and unified efforts be made to take the right messages to people, and change their attitude towards tigers and wildlife?

Changing people’s mindsets is the key to the problem. The goal is not to double our tiger numbers, but to educate people and change their attitudes, so that a doubled tiger population can thrive with lesser repercussions.

It is crucial to have a unified plan. The plan must whole-heartedly and systematically work towards making people living on the fringes of tiger habitats realise that they are the ultimate protectors of tigers and forests, and therefore, also the custodians of it alongside the forest department.

The plan must also aim at developing a deep sense of trust between local people and the forest department. For this, forest departments must initiate and maintain continuous dialogue with people and forge close alliances with civil society agencies to do so.

Where possible, partnerships with local community-based organisations must be strengthened to enable, and enhance local participation in conservation planning and efforts, including mitigation of conflict situations.

State governments must also re-think about compensation schemes, their disbursement mechanisms, so that they provide actual relief to people in times of need, and not create lucrative opportunities to be exploited.

Agreed that all of this is easier said than done, but so was sending a rover to the moon! There is much work to be done. And the time has come for all those fuming to pick a utopia, to work towards it, together. That is, if tigers in India are to remain burning bright.

Mayukh Chatterjee works with the Wildlife Trust of India, New Delhi, where he heads the Human-Wildlife Conflict Mitigation Division. The views expressed here are personal to the author