The forgotten tigons and litigons of Alipore Zoo and other hybrids

It is important to know about the lives of hybrids at Alipore and globally, given the baggage hybridisation has had and recent research redeeming it 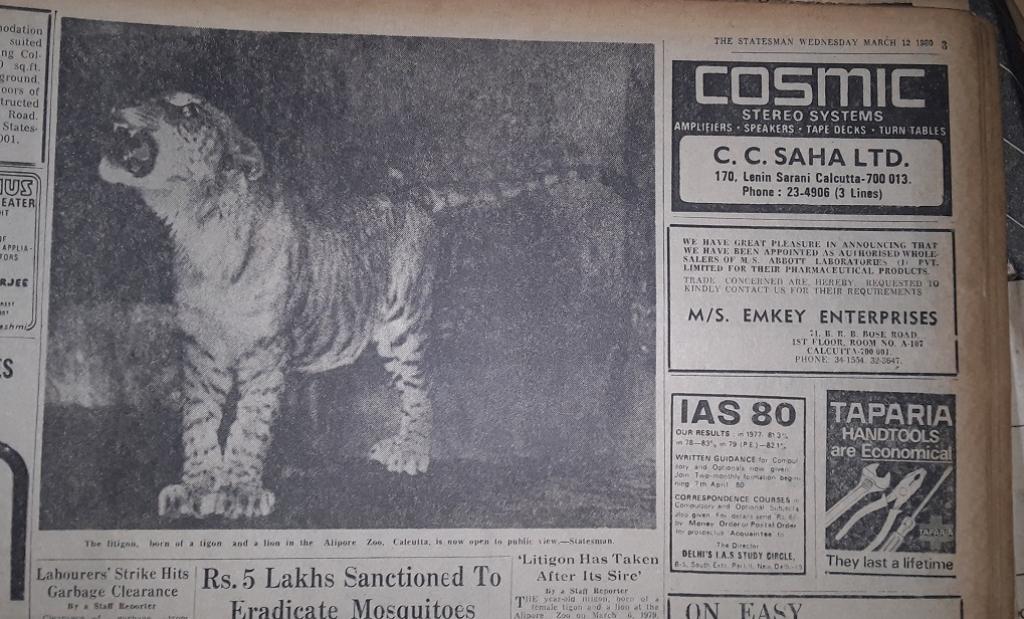 A photo of the litigon Cubanacan in Alipore Zoo published in the March 12, 1980 edition of The Statesman, Calcutta. Credit Subhodip Bid and Payel Biswas

This is the first part of a series. Read the second and third part here and here

The recent Netflix series, Sweet Tooth, has a memorable sequence showing a child named Bear saying, “Hybrids are the future of the world, therefore we as children, have taken a vow to protect all the hybrids.”

The popular television series, that depicts hybrids between humans and animals, has given rise to renewed debate on the nature of hybridisation as a phenomenon and if, in the future, there will be a revised understanding of hybrid organisms, both plant and animal.

In July 2016, scouring through the archives of the National Library in Kolkata, India, an information scientist and a librarian laid their hands upon a rare photograph published in 1980 in the daily newspaper, The Statesman.

The litigon was named Cubanacan by Jose Lopez Sanchez, the erstwhile Cuban Ambassador to India and photographed on the cub’s first day of public viewing in the zoo.

Cubanacan, the progeny of a lion and a tigon, was born at the Alipore Zoo in Kolkata, India, on March 7, 1979 and was the only surviving cub of his litter of three.

Mon Pobon magazine editor Rahul Majumdar recovered three more photographs of Cubanacan, the litigon, in Alipore Zoo on August 8, 2018. This added to the invaluable archive of the much-maligned and neglected phenomenon of cross-breeding big cats in Alipore Zoo in Kolkata.

Alipore Zoo had embarked on a 15-year endeavour to hybridise lions and tigers, an effort that created Cubanacan’s tigon mother, Rudrani, and her sister, Rangini, several years earlier.

Cubanacan was born after 15 years of hybridisation attempts that started in 1964 at the Alipore Zoo. The zoo reportedly produced its first hybrid big cat, a tigon called Rudrani, on October 13, 1972 in the sixth litter of a female African lion Munni and a male tiger Munna.

A second tigon, Rangini, was born on March 8, 1974. Both tigons were named by the then chief minister of West Bengal, Siddhartha Shankar Ray. A pioneering scientific success for India and even the rest of the world, Cubanacan was widely regarded as the first litigon born in the world.

Cubanacan’s remarkable genetic makeup sparked interest and enthusiasm in India and around the globe. The fascination with hybrid cats continued as Rudrani produced four more litigons in subsequent years. 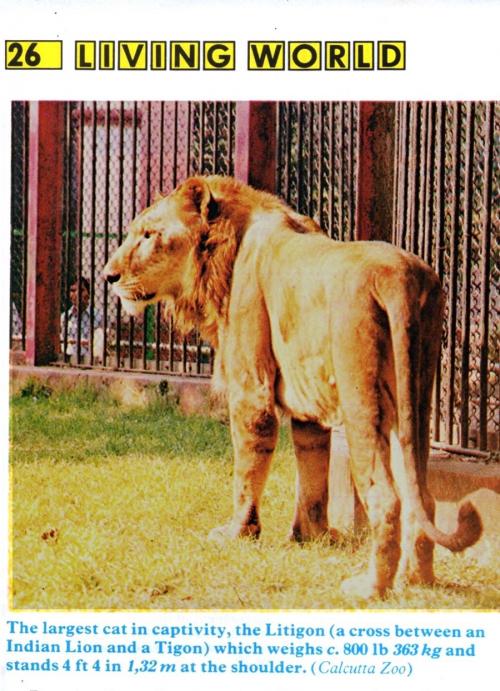 A photo of the litigon Cubanacan of Alipore Zoo in the 1985 Guinness Book of Records. Photo: Alipore Zoo and Karl Shuker

There is now evidence that these experiments were led by a scientific quest to determine if hybrids could be fertile, a question that struck at the heart of the notion of biological species.

At the time, the very definition of species hinged on reproductive isolation. Though probing at a research question, concerns surfaced about artificially creating animals not found in the wild as freaks for public curiosity.

There were also claims of animal cruelty during the process, an allegation that has come to the forefront in the current effort to ban cross-breeding of big cats in the United States.

In the midst of this controversy, hybrids still command ample public attention. The 2017 Guinness World Records (formerly the Guinness Book of Records) ranked, Hercules, a liger [lion x tigress] at the Myrtle Beach Safari in South Carolina, US, the world’s largest big cat.

Given the aversion to hybridisation and the subsequent 1985 ban on cross-breeding big cats in India, it appears that Cubanacan’s memory was purposely forgotten.

Big-cat researcher, Ratan Lal Brahmachary was deeply interested in studying the scientific aspects of the big cat hybridisation experiments carried out in Alipore Zoo. In a personal letter written to me (Shubhobroto Ghosh) on August 28, 2015, Professor Brahmachary expressed his views on Cubanacan the Litigon and other hybrid big cats:

Received your numerous queries on Cubanacan. I think the large size is a result of hybrid vigour. I saw ligers in Khartoum Zoo, they were also large. White tigers are also larger than the normal-coloured ones. Unfortunately, no scientific study on Cubanacan was carried out. I was most interested to know whether his urine / marking fluid was aromatic like that of the tiger or like the lion. No comparison of blood proteins or anything of that sort was attempted. Regarding research, the zoo had a dog in the manger policy as I learnt in 1980s.

In his book, Bagh O Tar Gyati Goshthi, published in 2011, Brahmachary wrote about a triple-hybrid, a lion X leopard X jaguar hybrid. Recently, zoologist and author and Guinness World of Records consultant, Karl Shuker, retrieved a long lost photograph of this hybrid creature at London Zoo on  May 22, 2017.

She was originally claimed to be a new species and exhibited in London Zoo for just over a fortnight during April 1908. She was then purchased by Glasgow-based circus / menagerie-owner Edward H Bostock on May 2 for the very sizeable sum of 1,030 guineas and taken by him to Glasgow. Uneeka was allegedly killed just over a year later by a lion that supposedly broke through from its own cage into Uneeka's.

Karl Shuker was both delighted but also very startled recently. That is because he discovered a black-and-white photograph of Uneeka in a vintage issue of a London weekly magazine entitled the Illustrated London News.

The image showed her sitting inside a cage. The zoologically-invaluable photo was one of a series of photographs depicting various London-themed subjects that had lately been in the news, all presented together on a single page in the May 9, 1908 issue of this magazine.

Like Cubanacan, Uneeka’s very existence shows that fertile hybrids very much exist and existed during the time when it was popularly presumed that all hybrids were sterile like the mule (Records of fertile mules exist, by the way).

The hybridisation debate in biology is important. Researchers at Texas A & M University in the US and the Pontifícia Universidade Católica do Rio Grande do Sul in Brazil have come a step closer to understanding the rich evolutionary history of the cat family.

In a paper, featured on the cover of Genome Research journal in January 2016, the researchers constructed extensive family trees of the 38 cat species, which illustrated maternal, paternal and biparental lineages within the cat family.

However, they found that lineages are not completely linear. Instead, this study revealed that feline ancestry has been shaped throughout its evolutionary history by hybridisation.

The recent finding of the litigon photograph warrants a fresh look into the biological significance and ethical connotations of the classic experiments performed at the Alipore Zoo.

This assumes importance following recent suggestions that interspecies hybridisation may be a natural and significant biological phenomenon. Critical questions have also been raised on the validity of the widely accepted biological species concept that has traditionally defined ‘species’ as reproductively isolated taxa that cannot mate with other taxa to produce viable offspring.

Conservationists suggest that hybridisation between different species and subspecies is among the many threats to endangered taxa, alongside habitat destruction and degradation, poaching, pollution and illegal wildlife trade.

This view has been endorsed by several international organisations, including the International Union for the Conservation of Nature (IUCN), the World Association of Zoos and Aquariums (WAZA) and many national agencies.

It has led to widespread condemnation of hybridisation in captivity and in the wild. The extreme abhorrence for hybridisation has also reportedly resulted in the euthanasia of hybrid animals in zoos.

Today, research by evolutionary biologists like James Mallet of Harvard University shows that on an average, at least 10 per cent of animal species and maybe 25 per cent of plant species are known to hybridise in nature.

The fraction of species that hybridise may, however, be much higher in rapidly radiating groups. A fundamental concern is the widespread view which considers inter-species breeding as a form of ‘genetic pollution’.

This view fuels the widespread academic notion that species are reproductively isolated units and that all events of hybridisation are undesirable accidents, with hybrids (such as sterile mules) being evolutionary dead-ends.

This concept has become a part of standard discourse on biological hybrids. Do these positions, both in the biological sciences as well as in conservation, actually stand up to scrutiny?

Shubhobroto Ghosh is author of the Indian Zoo Inquiry and the book, ‘Dreaming In Calcutta And Channel Islands.’ He is now Project Manager of Wildlife at World Animal Protection in India

Karin Saks is a primatologist based in South Africa. Since 1997, Karin has been involved in the fostering and rehabilitation of orphan baboons, the caring of injured monkeys who have been returned to the wild and has worked towards a harmonious co-existence between these primates and humans. She has many publications on primates and has been the subject of television programmes and films