The hopper bands in Wayanad are not locusts

A member of IUCN’s grasshopper specialist group explains the truth about the infestation in Pulpally, Wayanad

The grasshoppers seen in Pulpally, Wayanad, Kerala. They are known by the common name of 'Coffee Locusts'. Photo: Dhaneesh Bhaskar

It has been reported that there is a swarm of locusts in Kerala’s Pulpally which can potentially become a serious problem. Pesticide application has been recommended by many agencies.

I, a member of the Species Survival Commission (Grasshopper Specialist Group) of the International Union for Conservation of Nature (IUCM), conducted field observations that revealed the species in question is Aularches miliaris — the spotted coffee grasshopper (Family Pyrgomorphidae; Order Orthoptera).

Although they are commonly called ‘coffee locusts’, they are not a ‘true locust’. The Aularches miliaris is a grasshopper. It behaves like many grasshoppers in reaching high densities from time to time but rarely forms bands or swarms. 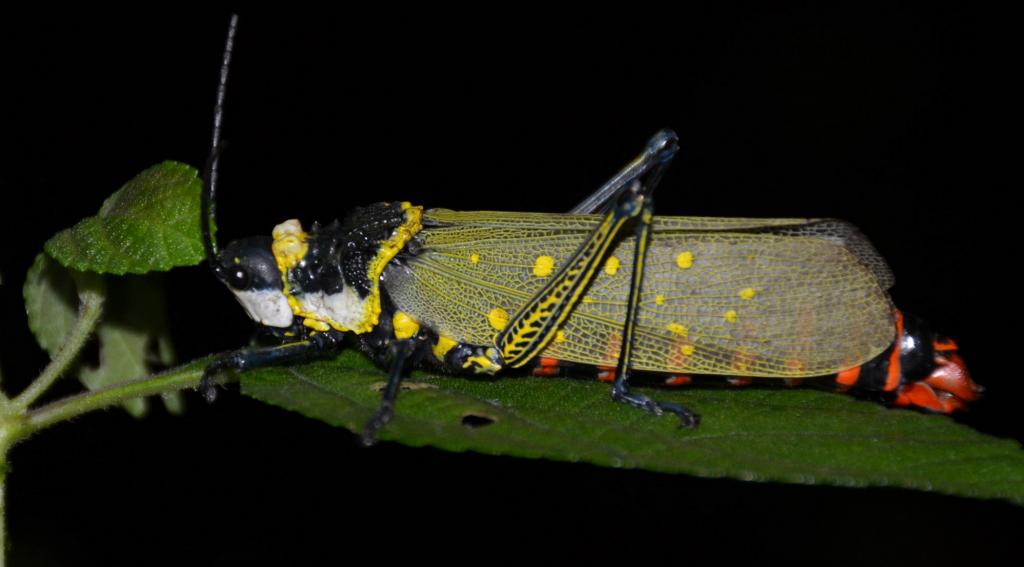 The family Pyrgomorphidae cannot be called as a locust family as reported in the news. The locusts that recently invaded northwest and central India are Schistocerca gregaria, belonging to the family Acrididae and commonly known as ‘desert locust’.

(1) They form at some periods, dense groups comprising huge numbers, bands of hoppers, and / or swarms of winged adults that migrate.

(2) They are polyphenic in the sense that individuals living separately differ in many characteristics from those living in groups.

There are several grasshopper species that satisfy just the first criterion and thus often loosely called locusts. It is owing to this reason that the Aularches miliaris is termed as ‘Coffee locust’.

However, the second criterion, the expression of density-dependent phase polyphenism, is rarer and has only been convincingly documented in the migratory locusts (Locusta migratoria), the desert locust (Schistocerca gregaria) and some other species of the genus Schistocerca.

In such cases, colour, behaviour, morphology, biochemistry and life history traits are strikingly affected by the change in local population density.

What we observed in Wayanad is a smaller aggregation (hopper bands) of grasshoppers (Aularches miliaris) that are largely being misconceived as early signs of locust swarms.

The swarms are usually much more visible than hopper bands. There occurs a phase transformation for locusts from bands to swarm.

The phase transformation among desert locusts is evoked by touching of the femur (thigh segment) of the hind legs. Locusts brush their legs against each other when numbers are high.

IN DEPTH: Locust attack: How swarms pose a threat to Indian farmers

In Australian plague locusts, it is the tactile stimulation of the antennae that trigger the phase transformation. Such tactile stimuli trigger the increase of biogenic amines, particularly serotonin (brain chemical), in the locust nervous system

These amines play critical roles in the neurophysiology of locust behavioural phase change. Such behavioural changes have never been reported in the species in question — Aularches miliaris.

Aularches miliaris is nowhere in this list and are a minor pest, causing occasional economic damages. Aularches miliaris is a species listed as lower risk, near-threatened for South India on regional conservation status assessment. Hence, severe pest management strategies are not to be suggested at this stage of infestation.

The Aularches miliaris nymph-infested areas in Wayanad was revisited one month after reports of infestation. Only a few grasshoppers were left the farm areas.

The nymphs of Aularches miliaris are highly polyphagous but adults are not and they are a minor insect pest of coffee, banana, arecanut, coconut, teak, and mango, causing occasional economic damage.

In Pulpally, Wayanad where the severe infestation was reported, it was observed that the nymphs had already left the coffee and banana seedlings. They were now found to be occupying teak trees. In this case, the economic loss is very minimum and this doesn’t require any chemical treatment.

Grasshoppers benefit from human-induced landscape changes and increase their abundance. The recent grasshopper events in Wayanad are a result of such land use changes.

The change in agricultural practices from mixed cropping and crop rotation to monocropping is leaving significant areas of the farm unattended. This favours the soil-incubating eggs of hoppers, and they hatch together in favourable conditions.

Grasshoppers are very important insects in the natural ecosystem. With their polyphagous nature, they stimulate plant growth, participate in nutrient cycling and play an important role in food chains.

It is a well-known fact that the grasshoppers can favour the nutrient cycle in grasslands more than any other herbivorous mammals. Besides the notorious pests, this group of insects includes many understated rare species that require protection.

Conservation-oriented research and their role in the ecosystem as an indicator species is being monitored by the IUCN SSC Grasshopper Specialist Group in the Western Ghats from 2016 onwards.