Cases of human-wildlife conflict in Pilibhit Tiger Reserve in Uttar Pradesh pose several challenges. Injuries and deaths from such conflicts, along with livestock depredation, contribute significantly towards building a largely uncooperative attitude among villagers towards wildlife and forest staff.

The challenges faced by the forest department field staff are worrisome.

I found — through detailed interaction with village communities on forest edges and forest staff in the Pilibhit Tiger Reserve and Social Forestry Division of Pilibhit district — that administrative lacunae in field staff can undermine not only human-wildlife conflict, but also larger conservation efforts.

The operational efficiency of the forest department is contingent on the field staff, which is the bridge between higher administration and local communities. Moreover, the unique ecological and agricultural conditions there tend to exacerbate the challenge of mitigating conflicts.

Sugarcane is the dominant agricultural crop in the region, and tiger habitats and hunting areas comprise tall grasslands. Sugarcane farms act as a substitute to such habitats. Hence, tigers are more likely to be found in sugarcane farms.

Amaria area in the social forestry division has many ‘sugarcane tigers.’ This area is dominated by large sugarcane farms that has migrant workers and landowners’ hamlets.

Tigers moved from their habitat to live on these sugarcane farms and forest fringes during the last decade. A range officer from the Pilibhit Social Forestry Division said these tigers may have adapted to new surroundings.

Amaria’s ‘sugarcane tigers’ comprise eight adults and four cubs. Villagers in the area said they live in constant fear for their safety, but continue to work in fields due to the wages they receive.

Villagers also said they lacked trust in forest authorities. Interestingly, they also believed that wildlife belongs to the forest department and hence should be fenced inside the forest. 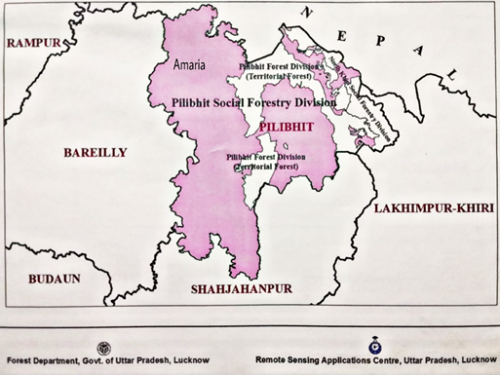 Some of the challenges faced by field staff in the reserve are:

A range officer stated that the local community feels no obligation towards the forest, and that they view wildlife as a threat and a hindrance. This adds to the view described by village communities.

Inner grassland management, too, has been a problem for the forest staff. Wild herbivores frequent such areas. Yet, locals often use these fields for grazing their livestock.

Moreover, retaliatory attacks on the field staff are not uncommon in Pilibhit. In the case of retaliatory killing of a tigress in Pilibhit in July 2019, the forest staff couldn’t intervene as they were attacked by angry villagers.

In another instance, a forester was attacked by villagers in Mahof range as he was trying to track a tiger in the adjoining sugarcane farm. The villages of a colony in the Mala range blocked one of the paths inside the reserve, allegedly to attack the forest staff in retaliation over a conflict with a tiger inside the core zone.

The forester and forest guard said they were obliged to maintain cordial relations with the villages in their respective areas. The villagers provide helpful labour to the department, but sour relations can disrupt the functioning of the forest department staff.

The range officers from district’s both forest divisions of the district claimed the department suffered from serious understaffing. To remove the dependency on cameras for tracking tigers, contractual hires, called ‘tiger trackers’, are employed in Amaria.

They play a crucial role in tracking ‘sugarcane tigers’ and warning villagers of their movement in the fields. Based on their tracking, villagers choose safer areas for the farmers.

Tiger trackers receive is Rs 175 a day, that is, Rs 4,550 per month. These salaries are paltry and do not adequately compensate for the physical toil and learning required for the task.

A ‘tiger tracker’ tracing tiger footprints near a sugarcane farm in Amaria, Pilibhit 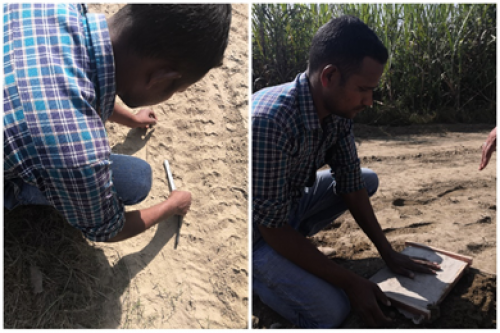 The tiger reserve division is also understaffed. Ranges such as Mahof have hired temporary staff to perform duties of forest guards owing to the delays in recruitment process of forest staff.

Range officers also claimed the ground staff lacked rapport-building skills with the local community as well as of crowd management. These skills are crucial, for the field staff is the interface between the forest department and the local community.

Mitigation of human-wildlife conflict and other conservation efforts will not be fruitful without the inclusion of local community in the ambit of forest staff’s initiatives. The “fence and fine” approach to conservation is inadequate and more participation from local communities is required. Staff fielding needs to be reinvigorated to bring about this change.

Field staff requires training in crowd management as well as rapport building with villagers. This could aid in establishing rapid response contacts within villages with the staff to track tigers and handle conflicts.

The state government should also ensure timely disbursal of adequate funds to compensate field staff and provide them safety equipment. The issue of understaffing in the department should be addressed immediately with timely recruitment and training.

The challenges faced by the field staff don’t exist in isolation from the beliefs and attitudes of the community and interactions with them. They create a system of inadequate conservation efforts and retaliation through lack of skilled staff and lack of trust.

This layer of complexity adds on to the social and functional pressures alongside ecological ones. The draft National Forest Policy touches upon stronger personnel training for managing human-wildlife conflict, but it is high time to have a dedicated policy and praxis to improve the conditions of field staff and address the administrative lacunae in the forest department.