World Crocodile Day: How crocodilians square off against big cats 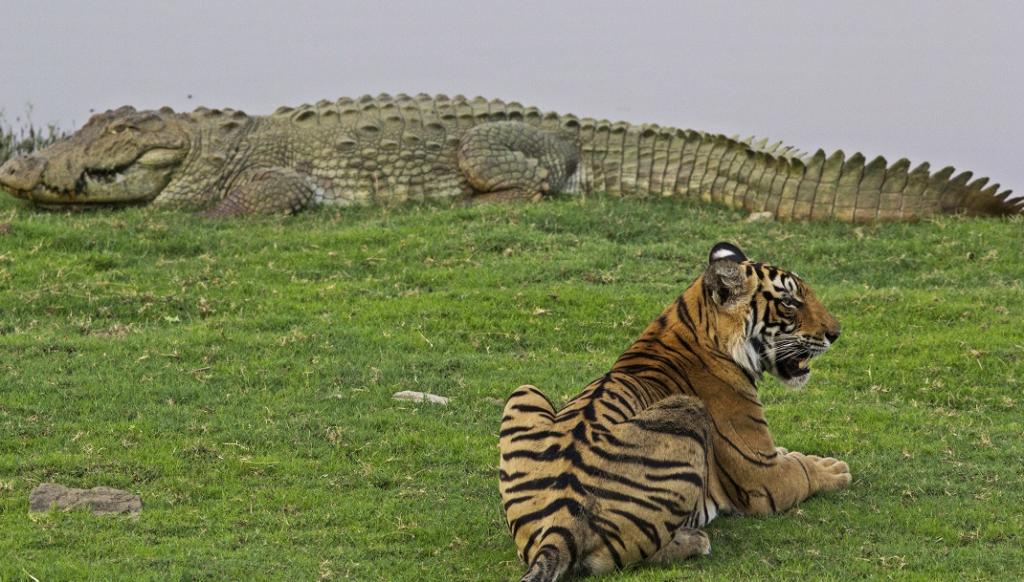 A male tiger, photographed along with a mugger crocodile at Rajbaugh, Ranthambhore. Photo: Vickey Chauhan via Wikimedia

Among Indian reptiles, the mugger or marsh crocodile (Crocodylus palustris) is known to be one of the most intelligent and skilful predators in the freshwater ecosystem. This species preys upon a variety of animals, including small insects and large mammals; even the hatchlings feed on diverse prey species — such as insects, amphibians, fish and crustaceans.

As they grow, the adults graduate to feed on larger vertebrates like fish, turtles, lizards, larger snakes (pythons), birds, monkeys, leopards and livestock. However, they are capable of attacking even larger mammals such as buffaloes, sambar and spotted deer and occasionally humans too.

It has been observed that the larger adults later shift their predatory habits completely towards larger prey species to fulfil their increased food requirements. There have been numerous incidents where one large adult mugger is involved in a conflict, either with another crocodile, or sometimes other larger prey, such as livestock, or even humans.

Here, I present some remarkable examples of mugger predation involving large wild cats based on published literature. A recently published note mentions how a mugger is an efficient predator as it can prey upon a large adult cat with skilful acumen.

On two different occasions, leopards lost their lives while tussling with large muggers in the Gir forest. Both, the leopard and mugger are expert apex predators governing their respective habitats and ecosystems. Leopards being prime predators in terrestrial forest habitats and crocodiles in freshwater ecosystems.

Previously, there have been cases where predators devoured young muggers or eggs, thus including hatchlings, juveniles and large adults too. However, large crocodiles predating big cats and vice versa are comparatively uncommon occurrences.

Jaguars are well-known for frequent predation on two Caiman species — Caiman crocodilus and Melanosuchus niger. Very few incidents have been published on this subject.

A famous female tiger named Machhli from Ranthambore Tiger Reserve, Rajasthan is also popular for preying habits with muggers. Even though smaller wild cats are capable of skilfully hunting a baby crocodilian, it was only recently that with due evidence, a video was presented by Conner De Monte depicting a small wild bobcat that was hunting an alligator hatchling at Port Charlotte, Florida.

Sir J Emerson Tennant noted an interesting incident in the book The Natural History of Ceylon (1861) about a leopard being preyed upon by a massive saltwater crocodile:

A curious incident occurred some years ago on the Maguruganga, a stream which flows through the Pasdnn Corle, to join the Bentolle (probable River Kalu Ganga or Kalu-Kukule) river. A man was fishing seated on the branch of a tree that overhangs the water; and to shelter himself from the drizzling rain, he covered his head and shoulders with a long folded into a shape common with natives. While in this attitude, a leopard sprung upon him from the jungle, but missing its aim, seized the bag and not the man, and falls into the river. Here a crocodile, which had been eyeing the angler in despair, seized the leopard as it fell and sunk with it to the bottom.

The above-mentioned crocodile species is most probably Crocodylus porosus. Another incident described by CR Pitman (1913) quotes:

While camping on the banks of the River Wainganga (a tributary of Godavari River), in the Central Provinces (now Madhya Pradesh) some villagers, one day, on March 27, brought me a half-grown panther measuring about 5’-6” that they had picked up dead near the river and which from the nature of the wounds on it, undoubtedly had been killed by a crocodile C. palustris.

In the first week of September 2014, an interesting incident was noted at Madhuvanti dam, Gir West, Junagadh. A group of four to five muggers were found feasting on a 7–8-year-old adult Asiatic Gir Lion.

The Madhuvanti dam is situated on the edge of Gir National Park and Wildlife Sanctuary, Gujarat. It is a small sized human-made water body constructed for irrigation, located on the edge of a protected area. Therefore it serves as one of the best water sources for wildlife during any water crisis or periods of drought. It is home to about 56 large muggers, according to the latest count.

The question remains, as to how such a large predator was preyed upon by a few muggers. The local forest officer (Dy Conservator of Forest, West Gir Division) stated that the lion’s death was not directly caused by any feud between the muggers and the lion, but rather “this adult lion lost his life in a fierce battle with another lion, the previous night. Later, somehow the muggers might have managed to drag the dead lion in the water and were ultimately found devouring it”.

In Africa, the Nile crocodile (Crocodylus niloticus) is well-known for its leopard-hunting habits, with a good number of accounts supporting this tendency. Likewise, muggers and estuarine crocodiles can be considered evenly skilful when it comes to specific predation of wild cats.

The fact that crocodilians are the ultimate apex predators of freshwater ecosystems is well established. All crocodilians share intense aggressive traits and are proven to be opportunistic predators, devouring whatsoever comes across their way, in and around their habitats.

The likelihood of any mugger allowing a predator from another species to have an absolute dominance within its territory is nil. If at all there are power conflicts, they usually result in fatal feuds, with either the large wild cat or another crocodilian member suffering a loss of their lives.

This piece was first published in Zoo's Print magazine on February 21, 2021. It has been republished here with due permission