Will future cities be friendly?

Urbanisation is not just about infrastructure but also social cohesion

It is rather naive to delink urbanisation from the rising lifestyle aspirations and the imperatives of economic development. Opportunities, power and prestige are some of the irresistible attributes of the growing urban centres which attract migrants on a large scale. In India economic liberalisation and urbanisation have become complimentary to each other. Although the wave of urbanisation is sweeping the entire Asian subcontinent and giving it the kind of preeminence that Europe and North America enjoyed due to their industrial socio-economic set up, it is India and China which are drawing attention. It is estimated that by 2025 around 2.5 billion Asians will turn city dwellers which will be nearly 54 per cent of the world’s urban population.

Between 1950 and 2005 India urbanised at the rate of 29 per cent, which was way behind China’s 41 per cent. According to a report by McKinsey Global Institute, by 2025 India will add 215 million people to its cities, whose population will account for 38 per cent of the country’s population. Urbanisation of this magnitude will not only impact world economy but also the environment, with its ever growing need for energy, fuel and consumer goods.

The India Infrastructure Report of 1996 estimated that in the next 10 years India would require an investment of Rs 28,035 crore on sanitation, water supply and roads. The Ministry of Urban Development estimates that in the next 20 years cities having a population more than 100,000 would require an investment of Rs 207,000 crore on urban transportation alone. This is a huge investment and cannot be met either by the budgetary allocation of the Centre, states or local civic authorities. Public-private partnerships and foreign direct investments are being suggested as panaceas. But they do not take into account the basic requirements of the 15 per cent of the total urban population of India in slums.

Rapid urbanisation is a typical developing nation syndrome and India is no exception to it. As against the developed countries which urbanised at a gradual pace, the developing countries urbanised faster. According to the World Bank Research Observer report of 2002, during the 1970s urbanisation in the Republic of Korea was 40 per cent but by the 1990s, 78 per cent of Korea was urbanised. Urbanisation attained by the US in 90 years was reached by Brazil in 30 years. The pace of urbanisation in India is not comparable to these countries but matters get complicated because the phenomenon is unevenly spread across regions and within cities.

So urban design in India has not just to cater to infrastructure, but also address issues relating to socio-cultural cohesion and sustainability. In other words, the biggest challenges are not creating urban infrastructure but making them friendly for the diverse socio-culturaleconomic background users.

There is no doubt that the city dwellers have to adapt to the culture of the city but at the same time they also often mutate the infrastructure to their convenience and create a new urban culture. A pertinent example in this context is the urban traffic culture and transport system of the two megacities Delhi and Mumbai. While in Delhi traffic rules are often flouted, people by and large adhere to it in Mumbai. But in Mumbai itself many commuters often risk their life by travelling atop the roof of the Mumbai suburban railway. Is this a problem of urban infrastructure design both in terms of system and function, socio-cultural incongruity to use the system, a simple case of overburdened infrastructure or a mix of all?

The growing economy of the postliberalisation era in India has changed the urban scenario as well as the process of urbanisation. A shift from the agrarian to the industrial economy, a maturing financial market, robust banking and credit system, flow of international capital and infrastructure have completely overwhelmed and corporatised the process of urbanisation. In no time contractors have became builders and builders developers. Their asset and net worth include the worth of their ‘Land Bank’ acquired by gulping swathes of land in adjoining villages, green belts and common land, sometimes legally and sometimes by circumventing the legal provisions. As a result, urban housing and realty have become a product of investment rather than fundamental necessity for survival. Urban housing is subservient to market forces, economy and completely out of the reach of common people. No matter how efficient the infrastructure, to sustain the cities like Mumbai, Kolkata and Delhi—having estimated population of over 16, 13.2 and 12.7 million respectively— is a nightmare for the urban planners, designers and environmentalists.

There will always be a development deficit due to the huge scale of the expanding economy and population. The poor will have no option but to dot the cities with their makeshift shanties, slums and chawls.

Urban infrastructure, spatial planning and environmental concerns are getting increasingly integrated. The cities are in a perpetual state of developmental chaos; laying of cables, drainage lines, roads, additional lanes, flyovers, demolition of good habitable houses to construct mall, business centre or multistorey apartment are the infrastructural pangs cities have to bear. An environmental audit can highlight their ecological impact.

Besides these, the cities also have to take care of what the World Bank refers to as Brown Agenda, which include concerns like water pollution due to untreated municipal and industrial wastewater, lack of sanitation, inadequate solid waste collection facilities, indoor and surrounding air pollution, and soil and land contamination because of improper disposal of solid and hazardous waste among others. Though green and sustainable design is a buzzword among the designers, architects and urban planners and some efforts to include them in the design of the urban infrastructure are being made, yet they look like an oasis in the island of clutter and pollution.

Overconcentration of population in certain urban centres also has a colonial legacy. The British created presidency cities like Bombay, Calcutta and Madras, which became the seat of power, prestige and opportunity and held their status till other cities like Delhi, Bengaluru, Hyderabad, Ahmedabad and Pune emerged. But even their emergence could not address the issue of growing regional disparity, poverty and rural-urban divide. India’s urban policy does have provisions for establishing alternative centres of trade, commerce, industry, residential dwellings with investment in infrastructure so as to reduce pressure on the existing cities. But in reality, instead of creation of new cities, only the existing big cities are expanding.

India’s urban policy also has provisions for nurturing and encouraging economic and social activities with large infrastructural investment in relatively smaller cities to check migration to bigger cities. It is in this context one asks about the rationale behind organising international events like Commonwealth Games in Delhi. Perhaps with the same infrastructural investment an altogether new modern city could have been established. The games infrastructure added more chaos than comfort to Delhi, notwithstanding the mammoth scam and misappropriation of the taxpayer’s, money unearthed later.

There is no effective mechanism to stop the expansion of cities beyond a certain size in terms of geographical area which is a major source of problem with our process of urbanisation. On the one hand our overgrown, overconcentrated cities are becoming environmentally and socially unsustainable, on the other urban planning in India seems to be more concerned with quick-fix solutions rather than visualising a longterm plan for development. The issue of urbanisation, urban planning and design is not only about the design of infrastructure and spatial artifacts. It is also about shaping and designing society and social set up of the present and future.

Urbanisation has to be sustainable not only ecologically and environmentally, but also socially, economically and culturally. Eventually, cities need to become the reservoirs of resources which could percolate to their vast populations to recharge and revitalise them. At the policy level urbanisation cannot remain confined to designing of dwellings and infrastructure alone; it should also be looked at as the larger process of creating sustainable social design.

Mihir Bholey is a senior faculty at National Institute of Design, Ahmedabad 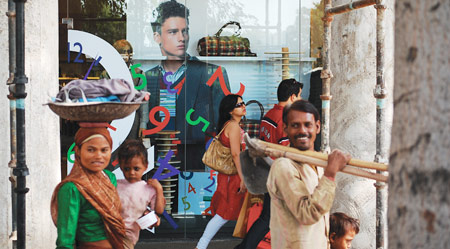