Humans just do not live by bread alone. But to climb the steps leading to total welfare, somewhere that equilibrium between work and consumption has to be achieved 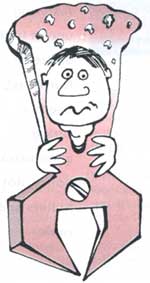 THERE appears to exist today a 'consensus' that industrialisation is the solution for our economic woes. This simple statement actually hides a deep philosophical standpoint. The question that is needed to be asked is, whether consumption alone is sufficient to ensure the welfare of an individual or is it equally necessary for an individual to have an opportunity to work, if necessary, with a low consumption rate.

Western thinking proceeds on the premise that increased consumption leads to increased welfare. if a citizen has food, shelter and a reasonable unemployment compensation, his welfare is ensured. Our thought, on the other hand, emphasises that work per se is much more crucial for the evolution of an individual in helping him realise his full potential. Consumption is considered as a mere necessity, and by itself, is not equated with welfare.

This implies that the first responsibility of the government would be to provide work to all, and if need be, by sacrificing some amount of economic growth and consumption. A person simply having half a litre milk, a one-room tenement and a mere old-fashioned radio, but with a full day's work, would be considered to be at a higher level of welfare than our Western friend. In terms of industrial development, promotion of employment generating industries should be centrestage.

In its recent Global Report on Industrial Development, United Nations International Development Organization (UNIDO) acknowledges that in modern industry, "new production techniques are reducing the Size of the required labour force". Data is provided to show that employment growth pattern in developed as well as newly industrialising economics is tagging behind the growth pattern observed in production.

The Western paradigm emphasises consumption. Therefore, even with enough jobs and several people being jobless, the latter's welfare would be presumed to have been achieved as long as they consume adequately. A relatively small number of persons may work in highly capital-intensive industries and produce goods required for the entire society. The others, although unemployed, would be taken care of by the state. Food, free health care and unemployment benefits will be available to them. A utopia indeed!

If at all work becomes the prime necessity for an individual's welfare, the prituary task of the government becomes to ensure that every person in the society works, and if necessary, even by being a frugal consumer- Understandably, it would mean sacrificing growth and consumption to some extent by the government. Such an approach would encourage labour-intensive agriculture, informal sector and small-scale industries supported by modern industry.

If consumption becomes primary, then the strategy of modern industries would change, Very few consumers will work. The rest will wake up in the morning, drink their glass of milk, and continue televiewing till lunch time. More TV and dinner will follow a siesta. Then some sex. And off to sleep. Once a month a visit to government agencies to obtain the food stamps. Voila! That would almost be a heaven of sorts.

On the other hand, if work is considered to be primary, skill training and technical assistance, easy access to credit and finance, basic infrastructure and facilities, and provision of information on markets and new technology" would have to be made available to the informal sector. People engaged in producing flowers, agarbattis (incense sticks) vegetables, bidis and the like, should receive incentives. They would be busy thinking about purchase, sale, market, interests, loans, spoilage, and so on. But they may not have TVs, nor may they have the certainty of food stamps. Later, some may possess industrial setups, build their own homes and acquire twowheelers. But, on the whole, the consumption level of the society may be lower than what it might have been with modern industrialisation.

For the West, consumption is primary. Hence the emphasis on industrialisation. We have to decide whether we want to become couch potatoes or want to partake in the thrill of work with all its risks and costs. That would determine whether we could accept modern industrialisation being the 'crucial engine of growth' which UNIDO recommends.