Women elected to panchayats in Karnataka and Rajasthan function in two ways: some live up to expectations and other succumb to the pressures 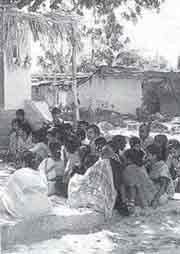 IN 1987, more than 14,000 women were elected to mandal panchayats in Karnataka on the basis of a 25 per cent reservation of seats for women. Before the elections, questions were asked about the suitability of women in panchayats.

Curiously enough, in many places it was the men who chose the women candidates for the reserved seats: either a locally powerful man's wife, mother or a "pliant" relative. But after the women were elected, they held their ground and did not give in to male manipulations. Suman Kolhan, vice president of the Bijapur zillah parishad, shared her experiences as an elected woman representative at the national conference of the Indian Association of Women's Studies this year. She said many elected women were genuinely concerned about whether they would be able to justify their election.

Despite the cynicism about the transition of women from the kitchen to elected posts, the women were keen to prove themselves. For example, one woman representative carefully went through an estimate for a village road, which provided for five tractor-loads of earth. On the scheduled day, only four tractor-loads were delivered. She refused to let the next meeting of the panchayat disperse until the missing tractor-load had been accounted for.

The passing of the 73rd Constitutional Amendment Bill, which provides for 33 per cent of panchayati raj seats to be reserved for women, will open doors for an about 670,000 women in the country to hold positions as elected representatives. Panchayat elections with reservation for women have already been held in some states, including Himachal Pradesh, Maharashtra, Orissa and West Bengal.

Several reviews of Karnataka's four-year experience with women in panchayati raj institutions indicate that reservation functions as a form of empowering women. Many elected women displayed a strong commitment to honour their responsibilities in a hitherto male arena. One aspect that distinguished them from the men was that people found them far more accessible.

The performance of women in office undoubtedly varies with the socio-political context and the space and support of the respective state governments and other organisations. The effectiveness with which women representatives can deal with women's issues -- which seems to be implicit in the debate centred on reservations for women -- is a complex issue. Just being a woman does not automatically make one concerned about women's issues. To begin with, rural women are not a homogeneous group. They belong to different classes, castes and occupational groups and have differing interests. Class and caste will invariably influence the priorities of women representatives. The existing power structure will generally lead to women from more privileged backgrounds being chosen.

Given the dominant political culture of today, many women representatives are likely to be politicians first and women later. Party politics -- more than women's concerns -- dominate even panchayati raj institutions and tend to determine priorities. In this respect, the role played by some women representatives in inciting violence against other women during communal riots is indicative of this and is a source of concern for the women's movement. One thing is clear -- there is no "natural" or "automatic" concern among women representatives for other women.

It is clear no such fundamental change will happen by itself. Despite constraints, women generally have the advantage of being relatively less prone to being sucked into the dominant political culture of manipulative power politics and corruption. In Karnataka, the women have been more concerned about their responsibilities than men, who are more interested in power play.

Where the women's movement or other organisations have facilitated awareness generation and empowerment of women, the women elected to panchayats have demonstrated the ability to introduce issue-based politics and win support. The all-women panchayats in Maharashtra are one example of this. However, legislative provisions alone cannot replace strong grassroots movements in attaining genuine democracy and gender equality. All concerned individuals and organisations -- within or outside government -- will need to channelise their energies into facilitating political education, access to information and empowerment of elected women.

ON THE face of it, the government's step to give rural women political power and a say in governance appears to be very progressive. But in actual practice, it will prove to be the reverse and one has serious reservations about it.

In 1984, the Rajasthan Kisan Sangathan hastily put up candidates for panchayat elections and managed to win ten seats in one tehsil. But the ten women failed miserably, even though all of them were from small tribal farmer families and understood the plight of poor tribals.

The reason they failed was because they were basically honest people who refused to become a part of the corrupt bureaucratic system of taking and giving "cuts" on project funds. As a result, they were targeted by block development officers, pradhans, accountants and gram sachivs who deliberately sabotaged projects and snared them in a maze of bureaucratic red-tape. The villagers, too, turned against the sarpanches because no village work was getting done and vested interests actively spread disinformation, lies and rumours about the new sarpanches. Some sarpanches realised that in order to survive, it was best to go along with the system so they were co-opted and gave and took "cuts" and bribes.

We learnt very valuable lessons from that election. In most cases, the system is stronger than we are and socially and economically weak people are vulnerable to it. It is not enough to have poor tribal farmers, dalits or women in important governing positions -- people's representatives should have the right consciousness, understanding and courage. Individuals cannot hope to achieve anything if they do not have the understanding, support and backing of a large section of the village. This cannot be created overnight by merely enacting a law or winning an election. It can emerge only out of a mass struggle that unites, organises and raises the consciousness of the people. Unfortunately, there are no shortcuts to this process.

It would be completely wrong to assume that once a woman comes to power, she will automatically fight against injustices. Women come from all classes and castes and have all the prejudices, discriminations, weaknesses (and strengths) of their respective classes and castes.

We must remember also that the beneficiaries of any enactment or project have always been the richer classes and castes and if any women benefit at all, it is the women of the upper castes. Many women of the upper class and castes practice moneylending, keep bonded labour and use highly discriminating social practices like untouchability. But even among the rich upper-castes, the women are totally subservient to the men in their families and should they become sarpanches, they will only be manipulated to further vested interests.

Though there is a provision in the Rajasthan Panchayat Act for women and dalits to be coopted into panchayats, from personal experience, I know that only those who will not oppose the sarpanch are included. Most often, they are not even called to meetings and, if necessary, their thumb impressions are taken on resolutions later and without their understanding any detail.

When women in our country have no say or control over their lives or futures, the only way to empower them is not by making laws from the top but by the slow and painful way of organising them, educating them -- and other oppressed sections -- to stand up and fight for their rights.

In those parts of the country where such a process exists and where women's organisations are thriving movements with strong mass roots, women will be able to use this reservation positively. But where such movements do not exist, electing a woman will not only be useless but dangerous. A woman will have to stand alone against well-entrenched feudal and vested interests who will spare nothing to discredit her and embroil her in administrative enquiries, civil and criminal cases. Alone, she will either have to give in and go along with the system or be completely isolated and rendered powerless.

Srilata Swaminathan is state secretary of the Rajasthan Kisan Sangathan.