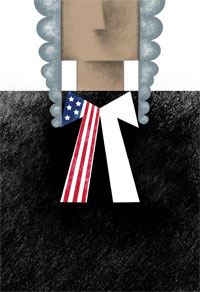 LObbying takes place in various guises and is not always subtle or hidden from public view. When the Intellectual Property Owners Association of the US or IPO sent a 17-member delegation to Chennai and Delhi in November, it made no bones about its agenda. The Innovation Dialog, as the initiative was termed, had the Indian judiciary and patent regulators in its sights, with the professed aim of sharing experiences and perspectives on intellectual property (IP) and practice.

IPO pursues its advocacy of IP rights single-mindedly and openly. To those who oppose the narrow American view of protecting IP rights at all costs without considering the social consequences which the Indian law does, such lobbying presents a sinister challenge.

As such, the IPO delegation’s meetings with offices of the Controller General of Patents, the Intellectual Property Appellate Board, and the Delhi High Court and Supreme Court are viewed as blatant attempts to influence the judicial outcome in the drug patent cases where patent protection to several life-saving drugs are being challenged.

In a replay of earlier protests, health activists have written a strongly worded letter to the Chief Justice of India (CJI), questioning the ethics and propriety of interactions between the judiciary and IPO’s pharma multinational members just as hearings are about to take place in important patent disputes involving cancer drugs. Should judges and regulars be giving privileged access to patent owners—now or at any time? IPO is blatant about its agenda and so are its Indian sponsors who include the apex Indian industry organisation, CII, and leading firms of IP attorneys that are involved in the litigation.

Conflict of interest and professional ethics loom large over these interactions which have become increasingly brazen in India over the past decade.

The starting point was the India Project launched by The George Washington University Law School (GWU) of the US in 2004 to bring about “awareness on IP and create judicial interactions”. The timing was significant because it was just a year before India was scheduled to enact a product patents law to meet its World Trade Organization obligations. In a well crafted strategy, GWU sent several delegations of US judges, leading IP attorneys and academics to educate Indians on the way the US system enforced the rights of IP owners.

The lobbying has focused on inculcating the values of the US patent regime which has a different orientation from the Indian system of IP protection that takes into account public health concerns while setting a higher threshold for grant of patents.

The most public fallout over the issue of lobbying was in 2011 when Justice Dalveer Bhandari of the Supreme Court recused himself from hearing the landmark Novartis case following an outcry over his participation in a couple of international IP conferences organised by IPO. But other instances of probable conflict of interest have been ignored for the most part although a few years ago the National Judicial Academy in Bhopal, alarmed by reports of the insidious and widespread lobbying of judges, had convened a special meeting to discuss the issue of judicial propriety in such matters.

This time around, the CJI needs to respond to the fears raised by civil society that the judiciary’s neutrality could be compromised by meeting the IPO delegation. The argument is that if the Supreme Court has taken serious note of the visits made by individuals linked to the ongoing investigations of the Central Bureau of Investigation to the residence of the agency’s chief, then the judiciary, too, should be judged by the same yardstick. Or is it the CJI’s case that judges of India’s top courts are a breed apart?