Employment guarantee scheme workers in Rajasthan do not get their dues

Puro kaam, par puro daam nehin milto, says Hodri Bai of Morthala village in Rajasthans Sirohi district. In the Grasia dialect this means, We do full work, but do not get full payment. The problem has plagued the National Rural Employment Guarantee Scheme in Rajasthan ever since its inception in 2006. Its an ironical situation considering that Rajasthan pioneered the nation on the right to work scheme.

People in Sirohi district complain that fixing wages is an arbitrary affair. Officials, usually a junior engineer of the Public Works Department, fix wages on basis of work done by the total group of workers at a sitean individual workers output is not considered. This practice has led to various problems. Since people themselves cannot measure the work they have done, they cannot correlate it with the wages they should get.

In most cases the payment is far less than the minimum wages.During the first half of 2006, people were paid Rs 20-30 a day instead of the stipulated minimum of Rs 73.

Initially, the scheme also fostered a workers aristocracy. In a group of 50, about 10 people, who were close to the supervisor, would come to the worksite only for the sake of attendance and go away. But they were paid wages, Manju Kahanar a worker of Janchetna Sansthan, a non-profit working on the issue of right to work, told this writer.

Kahanars organization was in the forefront of a movement that began in 2007 to improve the quality of the supervisors work.

Labourers are now divided into a group of five; work target for each day is fixed and the workers are paid after completing the assigned task. These interventions did lead to an increase in the workers output and there was increase in their earnings. Non-serious workers disappeared and there was more discipline. But Kahanar still believes there is no effective mechanism to check workers slackness. She calls this the hangover of the drought relief works. 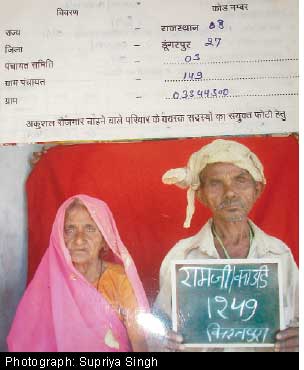 The supervisorcalled the matedoes not let people work more than what will earn them Rs 100. The workers are fine with this arrangement but the situation gets complicated because the overall in-charge at a sitethe junior engineersdo not accept the supervisors calculations.

They believe workers actually do less work than calculated by the mate. So after the overall in-charge has had his say, the workers end up getting less than Rs 100. In a conversation with this writer, Rajasthans one-time nregs director, Manju Rajpal, admitted to the discrepancy. There is as much as 20 per cent discrepancy in what the mates measure and what the junior engineers do.

Workers are caught in this tussle between the supervisor and the junior engineer. They are willing to work more to earn Rs 100 but the supervisor does not permit them to.


Then there is a paucity of officers to measure the workers output when works on the employment guarantee scheme are at full steam: usually May and June.

We are taking steps to improve matters, Rajpal told this writer. Junior technical assistants have now been asked to take up some of the junior engineers employment guarantee scheme tasks, but this change has improved matters only marginally.

The writer is a freelance journalist in Orissa, currently working on NREGS. The trip to Rajasthan was sponsored by Action Aid India