World Bank in a new avatar

While the World Bank launches its 'development gateway', critics gear up to counter the 'caring sharing knowledge bank' that it strives to portray 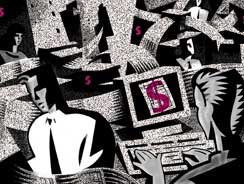 The World Bank plans to 'reduce poverty' by 'bridging the digital divide' with a $70 million electronic Development Gateway. Your caringsharing 'knowledge bank' is an 'honest broker' for development information on the worldwide web.

Yet after meeting members of the gateway team in Johannesburg last monthmembers of South African ngo schurches and the labour movement called for a boycott. They told Wolfensohn"While the development gateway purports to promote local community organisations and their information initiativesits true intention is to control the development information discourse to promote its own particular perpectives... We want nothing to do with systematic development misinformation of the sort we have come to associate with the World Bank".

The gateway promises open access like www.indymedia. orgwhere anyone can contribute. Howeverthe initiative was planned and developed in the bank's external relations departmentand as Lyla Mehtaa fellow of the Institute for Development Studieswho analysed the 1998 World Development Report on knowledgewarns: "The recent embrace of knowledge in the World Bank needs to be viewed with caution... Sometimes there is no clear boundary between knowledge and public relations".

With foreign direct investment multiplying and thus eclipsing World Bank lendingthe bank staff needed something new to sell to maintain their influence (and massive taxpayer funding). With its long experience in propagating Anglo-Saxon economic valuesWolfensohn decided to offer the services of his 'knowledge bank'. Academic analysts now describe the gatewayalongside other internet initiatives (the Global Development Network) as a strategic move to position the bank in the growing knowledge management businessedging out United Nations agencies with a remit in this field while promoting the values of Western governments. "We have very strong shareholders and they want to exercise their interests" said Horst Khlerhead of the bank's sister institutionthe International Monetary Fund (IMF).

Opinion was divided when the World Bank first invited 'civil society' organisations like OneWorld OnLineBellanet and the Institute of Development Studies to participate in a 'civil society' section of the gateway. Some were happy to see new money flowing into the fieldperhaps into their own networks and coffers. Othershowevernoted that corporate partners like Microsoft and the Financial Times are already shaping the gatewayand raised basic questions about access and control.

When Wolfensohn unveiled a prototype at the World Bank and IMF meeting in PragueSeptember 2000he received an open letter from hundreds of activistsacademics and IT people around the world. They warned that he "may have been misinformed about the extent and nature of civil society concerns and our disappointment in the bank's response."

Concerns focussed on lack of independent governanceover-ambitioninsufficient consultations and rejection of alternative designs (proposed by NGOs) for a parallel distributed approach.To date the bank's only clear responses have been creating a foundation to run the gateway 'independently' in Washington after its creation and launch by the World Bankand removing the word 'global' from its name. The bank had not assessed poor people's needs for electronic 'knowledge'nor even examined the uses made of existing development websites.

The World Bank has 200-odd sitesalmost all in Englishand people seeking information about the bank are increasingly directed to its homepage. Yet the supersite is poorly co-ordinatedcontains little information of real valueand especially in the Southbad connections and (suspiciously regular) technical difficulties with downloading make access well nigh impossible.For the poorest people of Indiawill a gateway be any more useful?

Delhi-based NGO Development Alternatives (DA) thinks soeven though there have been no public consultations on the gateway in India. Last year da was promised gateway assistance for a pilot electronic marketplace called 'TARAhaat' -- which is essentially similar to private sector initiatives like Drishtee and Greenstar.org. Promoting tradeeducation and 'e-governance' (basically e-mail contact between villagers and officials) with solar powered internet kiosks in nine villages of Madhya PradeshTARAhaat's brochure promises to "overcome 50years of povertyneglect and ignorance with just one click".

Ashok Khoslahead of DA, said he and the bank were "brought together by a fairy godmother. They have been talking to us about... how they can legitimise the gateway by showing that it can work with the grassroots... The World Bank throws away a lot of money for all kinds of things so I think we're a very good cause to throw it at." Asked about the risks of working with the bankKhosla commented: "I'm getting very bored with people who just sit around and pontificate in their armchairs."

When rural people unused to modern technology and business sign up to gateway portals like TARAhaatwhat commercial or other uses might be made of the data (educationincomeinterests) required by the bank? The bank's Delhi officedealing with the gateway only 'as and when required' from Washingtonhad not considered this issue in late 2000. Nor had they considered protecting the intellectual property rights (IPRs) of people posting development solutions on electronic bulletin boards. HoweverJohn Garrison'civil society' expert for the gateway teamsays: "Reaching out to poor people and disseminating their indigenous knowledge on the net is one of the key goals of the gateway". Khosla suggested that like the risk of powerful villagers monopolising TARAhaat kioskssuch complex issues can be left until after gateway-assisted e-governance has helped villagers. Meanwhilethe latest version of the gateway'Prototype 2.1'launched in Februaryshows few of the changes recommended by critics. A new 'ngo Page' is partnered only by a few little-knownmainly us -based organisations.

A spokesperson for the Indian development portalwww.indev.infeels the gateway "...has certainly become the victim of [a] campaign against the bank. As someone who witnessed the benefits umbrella organisations and portals can bring to the development communityI fully endorse the concept of a global portal. [The gateway] promises to involve people. Let us not suspect their intentions please."

Inevitablyhoweversome people who have tried working with the bank do suspect. Atreyee Cordeiro of PRIA, an NGO in Delhiwarns that the bank can cynically use its resources to co-opt elements of civil society.

Others question how government-controlled country gateways will deal with contributions from opposition groupsfor example Tibetan perspectives in the China gateway. And with millions of people in India and globally allied to anti-World Bank movementswill their perspectives be fairly represented?

According to Alex Wilks of the Bretton Woods Project - monitoring the bank and IMF -systematic editing out of unwelcome perspectives is symptomatic of the World Bank's approach. Like the South Africanshis experiences to date only confirm a suspicion that the gateway exists to promote preferred economic ideologies while denying dissenters a voice.

A group of IT and communication professionals from Latin America and the Caribbean attended a World Bank presentation on the gateway last year. They concluded: "if opposition to the gateway proposal grows (as it well may)there is a risk the bank will activate the Don Corleone Syndrome (make them an offer they cannot refuse...). This would mean the bank would begin to offer funds to select ngo s in return for their endorsement of the gatewayor access to their informationknowledge and "branding" assetsetc."

With peoples' movements now uniting globally against economic re-colonisationbank management clearly sees a need for what the Latin American/Caribbean group called a 'divide and conquer' strategy. Howeverthe bank has been struggling to raise funds for the gateway. Discussions continueand the next version (3.0) of the gateway will be launched in July. Yet a question mark remains over its potential as a cash cow for ngo plans and networks. Might the gateway soak up all the concessional funding available in this field? And finallyin the long runwill it privatise 'knowledge' gathered free from the worldand charge us all for access?

As The Hindu commented last year: "the Bank may want to signal that it is turning into a caring organisation butlike a leopard and its spotsit cannot change even if it wants to."

Zoe Young is a researcherwriter and film-maker based in London