The present land tenure laws do not encourage the conservation of agricultural land and lead to fallow patches, as is evident from the condition of a typical watershed. 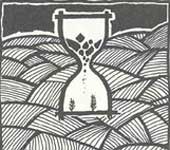 THOUGH insecure land tenure is a major cause of natural resource degradation, very little attention has been paid to the role of land tenure in promoting natural resource conservation on private agricultural land. These observations from a walk through a degraded watershed may, however, help demonstrate the importance of secure tenancy and the need for change in land tenure laws.

The watershed in question is located in Andhra Pradesh's Mahbubnagar district, though many of these observations could just as easily have been made in any watershed in the semi-arid tropical regions of India. The annual rainfall in the region is about 650 mm and the soils are mainly sandy.
There was a heavily degraded, 8.1-ha, fallow plot in the watershed, which belonged to a large landowner who did not want to sell it. The soil was so degraded practically nothing would grow on it except for some stunted Prosopis juliflora bushes. A group of landless villagers indicated their willingness to lease the land on a share tenancy basis. They wanted a lease of at least 7 years because the land was so unproductive, a short-term lease would not yield any income.

However, the owner was not agreeable to such an arrangement under the present land tenure laws, by which tenants could claim ownership to land so that they could cultivate it repeatedly over several seasons. Landowners usually overcame this disadvantage by limiting leases to a single season and this landowner was no exception: He was willing to lease the land for only one season at a time. However, given its unproductive state, he could find no takers. Meanwhile, degradation intensified.

Why didn't the man sell the land? Many land owners retained ancestral land for sentimental reasons. Also, if there were several co-owners, selling land could be legally cumbersome. But preliminary findings suggest many absentees held on to their land because there was a dearth of better alternative investments. A nearby plot of relatively fertile land was cultivated but not protected from erosion. This land belonged to a small farmer who owned no bullocks. He, therefore, leased it out on the usual single season basis, to a different farmer each year. The tenant of the plot laughed when asked whether he would invest in soil conservation measures. As he would till the land for only one season, he saw no reason to undertake such measures.

Further along, still another area was fallow and badly eroded. This 16.2 ha area was distributed among Harijans about 20 years ago. Though the land was allotted by the collector, property lines were never demarcated. The allottees cultivated the land for about three years, after which yields declined drastically because of heavy erosion. Since then it has remained fallow.

On a small section, a farmer had dug a well and terraced the land. He acquired legal property demarcation specifications in 1990, after which he began investing in the land.

Our short tour of the watershed and later, conversations with the villagers showed that short-term tenancy was the major cause of natural resource degradation. Though the people we spoke to had ideas about increasing productivity and preventing degradation, they saw no point in doing so given their fleeting access to the land. Under these circumstances, technical solutions such as watershed management were of little use and could not be a success. Tenure reform was the critical prerequisite to technical improvement.

---John Kerr is an economist with Winrock International Institute for Agricultural Development, N K Sanghi is zonal coordinator -- Andhra Pradesh and Maharashtra -- for the lab-to-land programme of the Indian Council of Agricultural Research.