You have the right to remain silent

It took less than a day for narendramodiplans.com, a political satire website that had more than 60,000 hits in the 20 hours of its existence, to be taken down. A simple webpage that showed a smiling picture of Narendra Modi, the touted candidate for India’s next Prime Ministerial campaign, flashing his now trademark ‘V’ for Vengeance Victory sign. At the first glimpse it looked like another smart media campaign by the net-savvy minister who has already made use of the social web quite effectively, to connect with his constituencies and influence the younger voting population in the country. Below the image of Mr. Modi was a text that said, "For a detailed explanation of how Mr. Narendra Modi plans to run the nation if elected to the house as a Prime Minister and also for his view/perspective on 2002 riots please click the link below." The button, reminiscent of 'sale' signs on shops that offer permanent discounts, promised to reveal, for once and for all, the puppy plight of Mr. Modi's politics and his plans for the country that he seeks to lead.

However, when one tried to click on the button, hoping, at least for a manifesto that combined the powers of Machiavelli with the sinister beauty of Kafka, it proved to be an impossible task. The button wiggled, and jiggled, and slithered all over the page, running away from the mouse following it. Referencing the layers of evasive answers, the engineered Public Relations campaigns that try to obfuscate the history to some of the most pointed questions that have been posited to the Modi government through judicial and public forums, the button never stayed still enough to actually reveal the promised answers. For people who are familiar with the history of such political satire and protest online would immediately recognise that this wasn’t the most original of ideas. In fact, it was borrowed from another website - http://www.thepmlnvision.com/ that levelled similar accusations of lack of transparency and accountability on the part of Nawaz Sharif of Pakistan. Another instance, which is now also shut down, had a similar deployment where the webpage claimed to give a comprehensive view into Rahul Gandhi’s achievements, to question his proclaimed intentions of being the next prime-minister. In short, this is an internet meme, where a simple web page and a java script allowed for a critical commentary on the future of the next elections and the strengthening battle between #feku and #pappu that has already taken epic proportions on Twitter.

The early demise of these two websites (please do note, when you click on the links that the Nawaz Sharif website is still working) warns us of the tightening noose around freedom of speech and expression that politicos are responsible for in India. It has been a dreary last couple of years already, with the passing of the Intermediaries Liabilities Rules as an amendment to the IT Act of India, Dr. Sibal proposing to pre-censor the social web in a quest to save the face of erring political figures, teenagers being arrested for voicing political dissent, and artists being prosecuted for exercising their rights to question the state of governance in our country. Despite battles to keep the web an open space that embodies the democratic potentials and the constitutional rights of freedom of speech and expression in the country, it has been a losing fight to keep up with the ad hoc and dictatorial mandates that seem to govern the web. 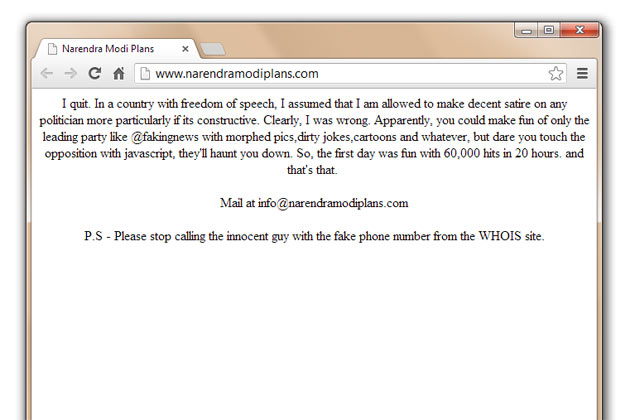 We have no indication of why this latest piece of satirical expression, which should be granted immunity as a work of art, if not as an individual’s right to free speech, was suddenly taken down. The website now has a message that says, “I quit. In a country with freedom of speech, I assumed that I was allowed to make decent satire on any politician more particularly if it is constructive. Clearly, I was wrong.” The web is already abuzz with conspiracy theories, each sounding scarier than the other because they seem so plausible and possible in a country that has easily sacrificed our right to free speech and expression at the altar of political egos. And whether you subscribe to any of the theories or not, whether your sympathies lie with the BJP or with the UPA, whether or not you approve of the political directions that the country seems to be headed in, there is no doubt that you should be as agitated as I am, about the fact that we are in a fast-car to blanket censorship, and we are going there in style.

What happens online is not just about this one website or the one person or the one political party – it is a reflection on the rising surveillance and bully state that presumes that making voices (and sometimes people) invisible, is enough to resolve the problems that they create. And what happens on the web is soon going to also affect the ways in which we live our everyday lives. So the next time, you call some friends over for dinner, and then sit arguing about the state of politics in the country, make sure your windows are all shut, you are wearing tin-foil hats and if possible, direct all conversations to the task of finally finding Mamta Kulkarni. Because anything else that you say might either be censored or land you in a soup, and the only recourse you might have would be a website that shows the glorious political figures of the country, with a sign that says “To defend your right to free speech and expression, please click here”. And you know that you are never going to be able to click on that sign. Ever.