Indoor air quality is directly dependent on quality of outdoor air. It's time the aam aadmi came out on the streets to clean up not just corruption, but also the city air which is taking a toll on people's health and purse

Indoor air quality is directly dependent on quality of outdoor air. It's time the aam aadmi came out on the streets to clean up not just corruption, but also the city air which is taking a toll on people's health and purse 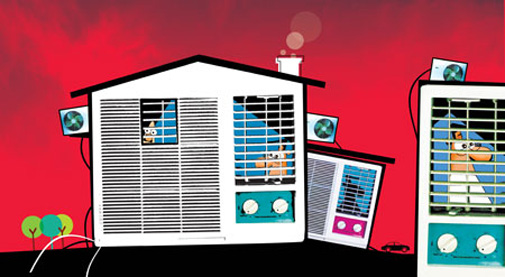 Do you feel you can escape the damaging Delhi air by locking yourself inside your room? Does your air-conditioner (AC) give you an impression that as long as one is indoors outside air can be ignored? And is that the reason you don’t seek healthy air to be on priority list of aam aadmi because you can buy it in the form of a big tin can (AC) like bottled water? Whatever may be the reason for the nonchalant attitude towards air pollution, let me make clear one thing: ACs can’t produce personal supply of clean air for you to breathe.

ACs supply air from outside after cooling it down and have some basic dust and odour filtering devices. But with outside air dangerously poisoned with toxins that can directly penetrate our blood stream and cause serious health hazards, anybody can guess how healthy is the air being supplied. In other words you are breathing pretty much the same air as outside with marginally less PM10 (dust) and odour, which anyway are the lesser poisons flowing in our urban air.

Television has recently been bombarded with commercials by AC manufacturers selling tin cans that can transform the indoor air of urban India into “breath of life” from Swiss Alps. “Dust-free”, “germ-free”, in fact some even offer “healthy air” in their sales pitch. Accessorised with advanced filters and anti-bacterial coatings, their claims might be true in some (laboratory) context but will they work in Delhi? Can they clean air which can on its own damage if not kill most bacteria and germs which these ACs promise to remove?

Truth is that ACs available in the Indian market don’t have the technology to remove gaseous pollutants like NOx, SO2, benzene and ozone, among others. Technology to remove acute pollutants like PM2.5 from air hasn’t even been fully developed; world’s first ACs which can actually clean air of PM2.5 have only been developed in the last couple of years, still years away from mass production and reach of your pockets.

Do you think the staleness hanging in your air-conditioned room is sign of healthy environment? In reality your indoor air most probably is way more toxic than outdoor air. This will be so due to additional load of indoor air pollutants like volatile organic compounds (VOCs) and radiation (see box: 'Sources of indoor air pollution'). Most indoor air pollutants are proven or suspected carcinogens. Indoor air pollution becomes even more critical in air-conditioned spaces as the limited ventilation and air change traps pollutants and builds up their concentration, increasing exposure and health hazard. This is one of the reasons why America and Europe have stringent indoor air quality standards for their buildings as they are aware that even with cleaner air outside, their people can get really sick because of indoor air pollution, heightened by air conditioning. Â´â•—â”In India, we have no indoor air quality standards to start with. Â´â•—â”There it is recommended to open the windows for few hours daily to let the toxins out. Not sure same can be advised for Delhi.

Market knows the truth and that is why it is already flowing with air purifiers, independent of ACs. There are many types and sizes of these air cleaners in the market, ranging from relatively inexpensive table-top models to sophisticated and expensive whole-house systems. Some air cleaners are highly effective in removing coarse particles, while others, including most table-top models, are much less so. Like ACs even air cleaners are generally not designed to remove gaseous pollutants or PM2.5. Some even employ introduction of ozone into the interiors to neutralize VOCs but this is a botched approach as ozone itself is a toxin which needs to be kept at a distance (preferably high up in the sky, in ever thinning ozone layer).

Does your AC’s refrigerant gas leak every now and then? Is running and maintaining ACs becoming increasingly costlier? Don’t blame it merely on poor quality of manufacturing as air pollution has a menacing role to play. High level of pollution is causing ACs' inbuilt filters to choke quicker, reducing the energy efficiency of the unit and increasing your monthly electricity bill. Toxicity level of air has reached a stage where it is eroding the internal machinery of the ACs, evident from regular leakage of refrigerant and causing other wear and tear. Result: more annual repair and maintenance costs. Further, the leaked refrigerant gas, mostly hydro-flouro carbons (HFCs), is adding to pollution and global warming. In fact with falling health and increasing medical costs air pollution has already severely burdened our purses.

As recently revealed in the study on safety measures in automobiles, manufacturers readily compromise on safety features to curtail costs.  AC manufacturers are already shying away from introducing super energy efficient models, fearing poor uptake by the Indian consumer. Cost sensitivity of Indian market will ensure that towering expenditure of adding purification technology to our ACs to actually safeguard our health will not happen so easily. Even if it does these models will be way beyond aam aadmi’s means.

Delhi’s air is filthy polluted even if government officials argue it’s not as bad as Beijing. Being marginally better than the worst (if we are) is nothing to seek relief in. Delhiites will still catch respiratory ailments and cancers maybe a day later than Chinese at max. Numbers have always been bad and available in public domain but no one bothered noticing. Now media has put them on the table for the world to debate. And I’m glad that Delhi’s air is now at least being discussed. Face it! This is not a number game or someone else’s problem, it’s yours and mine, and it won’t disappear into thin air on its own.

Wake up Delhi, you need to get angry about this and not get falsely cooled down by your AC. The air you are breathing can’t be fixed by a tin can; you need to clean it yourself and you should have sat on a dharna  yesterday itself, at least start now.