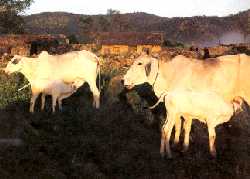 conservation implies using the natural environment and its resources in a sustainable manner. It includes maintenance of biological diversity. Species can either be conserved on site or outside their habitat. Plants, for instance, are conserved on site - in situ - in their natural habitat, or ex situ, where seeds are dried and preserved in the cold. These seeds are tested for viability every few years when they are planted out. In the in situ approach to conservation of animals, the breed can be improved upon by selecting the highest quality parents. This means setting up specialised breeding farms, preferably in the native tracts, and selection of animals from as wide a base as possible to maintain genetic variability.

"Generally, a herd of 100 breedable females, kept at three or four different locations is ideal. But the cost of maintaining large herds is a major bottleneck," says S C Gupta, senior scientist at nbagr . The role of the farmer is important for on-site conservation. By creating awareness among farmers and giving them assistance in the form of know-how and funds, he says, the results could well be worth the effort. Sometimes breeders take the initiative but such efforts need whole-hearted government support (see box: People to the rescue ). "Unless the farmer is compensated in some way for preserving and improving indigenous livestock - his lifeline to sustainability - there is no way animals will be conserved on farms," adds Madan.

In ex situ animal conservation, genetic material is stored in the form of frozen semen, embryos or nucleic acids - dna and rna , the molecules of inheritance. Though semen and embryos of a number of breeds have been stored, the list is not complete. "For long-term preservation of endangered breeds, storage of dna and rna is a must," says Gupta.

Preserving and conserving the unique genetic characteristics of farm animals assumes great importance since their continued existence provides genetic material to enable imported breeds to become locally adapted. Breed diversity permits more rapid genetic progress to be made. It is always quicker to develop livestock by importing genes from outside than by selecting from within a breed. Often, breed characteristics are governed by a single gene. This simplifies transferring the desired characteristic to another breed. One breed can thus be a source of genetic material for another.

The situation in India is complex. In most cases, information on the genetic resources available and their use is lacking. Bhat says that there is no danger of any breed getting extinct at the moment, but there is an immediate need to study breeds and identify and map genes responsible for heat tolerance, disease resistance and high fertility. For instance, it is not conclusively proved that Indian breeds are resistant to diseases common to India. "We first need to confirm that, catalogue these genes and then conserve them. Given the high cost and number involved, we just cannot conserve breeds simply because they exist," says Bhat.

Much depends on the indigenous environment of the breed, the management practices followed, extent of crossbreeding, rate of decline and overall utility of the breed under local agroclimatic conditions. Says Gupta, "In the uk , for example, a population of 750 would classify a cattle breed as endangered. In India, much higher figures will have to be considered for declaring a breed as endangered, given the harsh environment conditions, prevalence of disease, and the illite-racy of farmers. Moreover, animals in India are scattered over many small holdings as against the situation in the West, where a large number of animals are present in a small number of farms." In India, Gupta suggests that a population between 2,000 and 5,000 means that a breed is endangered.


Since many breeds are endangered and resources limited, some sensible criteria have to adopted for conservation. The first step is to make an inventory and decide on priorities. Breed societies for improvement and conservation of livestock are practically non-existent in India. Though some suggest that only those breeds that have been properly evalua-ted should be conserved, evaluation is time consuming and difficult in practice.

It is necessary to establish the number of livestock and poultry breeds available, their demography and geo-graphical distribution before setting about to conserve them. Storing germplasm in genebanks, developing transgenic forms and identification of rare genes for propagation and commercialisation comes later.


Alarmed at the rapid disappearance of domestic animal breeds, fao member countries decided in 1995 to implement a global strategy for management of farm animal genetic resources. The fao 's second World Watch List of Domestic Animals, though not comprehensive, estimates that there are 783 breeds of cattle, 62 breeds of water buffalo, 313 goat and 866 sheep breeds, besides 375 breeds of horses and 263 breeds of pig. A large number of these are under threat.

India is the proud possessor of the largest livestock population in the world. But random crossing, breed substitution and inadequate programmes for improvement of local breeds have led to the genetic dilution of native breeds. It is believed that in India almost 60-80 per cent of livestock falls in the nondescript category. Quality, rather than quantity, is important as breeds go since it is difficult to take care of livestock and increase their productivity. Nivsarkar, director of the nbagr , feels that the number of livestock should be limited. "India's huge livestock creates problems in management. How are we going to get resources to maintain them?" he asks.


A number of issues are involved. To begin with, all surveys of domestic animals are species-based rather than breed-based. Species are not lost easily, breeds are. "We have figures on the total number of cows and buffaloes but not on the different types. The nbagr has based its figures on those handed down from past surveys which are species-based. This will change. nbagr has started surveying breeds, but it will take about 10 years before we can provide accurate figures on the actual numbers. It is only then that we will be able to decide on criteria and strategies for conservation," says Nivsarkar. But by that time, India may have lost many breeds.

Lack of accurate population figures is a major hindrance. The figures in censuses are sometimes doubtful (see box: The yak in Ladakh ). Information on the status of many breeds is currently not available. "In a few preliminary breed surveys that have been undertaken, the number of figures have been grossly exaggerated," says Gupta. "The 1977 livestock census reported a population of 157,000 Bhadawari buffaloes. However, in a preliminary survey conducted by the nbagr in 1993, the number was reported to be a few thousand only."

Animal husbandry scientists also differ on the actual number of breeds. "The greater the number, the greater the complications," jokes Nivsarkar. "The numbers game is played more on the basis of physical characterisation rather than genetic distancing," he says. Over generations, the migration of animals may result in differences in their appearance or performance, but the genetic distance may not be significant, he clarifies. "Besides, as you travel from district to district, the same breed may be called by different names."

Says R Sahai, principal scientist at the nbagr , "The greatest constraint for planners is the lack of authentic information on the population size, performance level and genetic variability on a large number of breeds."


Scientists at the nbagr are not happy with the way policy issues in conservation of domestic animal genetic resources are dealt with. "Policy planning should cover all aspects of biodiver-sity," says Nivsarkar. "If we can have an act for forest protection and wildlife protection, why not have an act for protection of domestic animal genetic resources? Urgent policy decisions are necessary today, since conservation of animal gene-tic resources is complex and slow. If a breed dies, its replacement takes years," he says.

Nivsarkar is unhappy with current conservation programmes. "Most programmes for genetic improvement are not practical. Interstate export of genetic material is a matter needing urgent attention, since this results in indiscriminate breeding, increasing the population of nondescript animals," he says.

Recent political developments have not helped either. In the Ninth Five-Year Plan budget, the animal sciences division's requirement was 14 per cent of icar 's total budget. However, as a result of frequent change of regime at the Centre, the plan has not been approved and the 1997-98 budget is frozen at the 1996-97 level. Says Madan: "Animal husbandry has maintained a growth rate of about 6.7 per cent, almost twice that of the agricultural sector. Yet, in the last five-year plan, only seven to nine per cent of the total budget allocated to icar was for animal husbandry."


The Convention on Biological Diversity, while clearly accepting each country's sovereignty over its genetic resources, has yet to come up with solutions on implementation and verifications of the origins. Nations possess different subsets of the total number of breeds. Countries are increasingly seeking access to exotic animal genetic resources from elsewhere. "Implementation, or the 'do-how', is certainly going to be a problem," predicts M S Swaminathan, chairperson of the M S Swaminathan Research Foundation, Chennai. "How are developing countries going to prove that a particular physical trait is the result of a gene that is specific to their country?"

This is a major problem for India, since there is little or no documentation of genes peculiar to Indian breeds. In the West, each animal is registered and herds and flocks documented to ensure that the purity of the breed is maintained.

Also, there has hardly been any concerted effort to increase awareness of the importance of Indian farm animals. "Of the total power required for agricultural operations, only 12 per cent comes from tractors," Bhat says. "The rest comes from animals, which are a renewable source of energy. Unfortu-nately, it has never occurred to the administrative and political leadership to put in greater effort to harness this power."

On the other hand, those who raise livestock do not have the resources to increase output by additional investment. Says Madan, "It is mainly landless or marginal farmers, constituting 52 per cent of the farming population, who own 67 per cent of the 450 million livestock in India. They sustain themselves on a 'low input, low output' mode of production. Conservation of breeds will not come about as long as farmers remain socio-economically deprived."

The interests of the people and national interests are not at variance. But unless people are involved and policy changes worked out, little is going to be achieved. While other countries are making sustainable use of animal resources and reaping benefits from patenting genes of breeds they claim to be from their own stocks, India is losing out. If India cannot manage its own domestic animal genetic resources, what is the point of signing the Convention on Biological Diversity? And where does it stand in relation to those countries which can? The fate of its animal genetic resources may soon go the way of neem and turmeric, whose products, patented by developed countries, have brought in huge profits for transnationals.