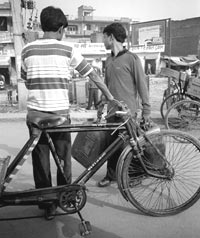 Towards the end of 2001, as part of an ongoing public interest litigation on air pollution in Delhi, the apex court took notice of the ugly business of adulteration. It has repeatedly pointed out the merit of the CNG programme in culling this menace. But the Union of India, in its affidavit of October 2001, almost wished away the problem. It claimed that out of the total numbers of samples tested by them throughout that year, only 7.5 per cent had failed. All except one were within the "tolerable limit of tests". Even that one failure was a mere case of "marginal failure", only on one parameter.

The Supreme Court was not willing to accept this stand. On November 22, 2001, it directed its advisory committee, the Environment Pollution (Prevention and Control) Authority -- EPCA -- to appoint an independent agency for a survey. EPCA, in turn, directed the Centre for Science and Environment (CSE) to undertake the study (see box: Astutely tampered ). The CSE tests exposed a failure rate as high as 26 per cent in the fuel samples it had collected. Following the submission of the CSE report, on April 5, 2002, the Supreme Court directed the Union of India to introduce "clean non-adulterable fuel" in critically polluted cities of India.

One and a half years have gone by. The only action the government has taken so far is a vague action plan. Thus it is not surprising -- though extremely galling -- that today, the failure rate reported in satellite towns around Delhi is still as high as 25 per cent. Even as the law took notice of the problem within the metropolis, the adulteration business merely shifted base a little beyond. Then when the Faridabad fiasco hogged the limelight, operations shifted further beyond. Complaints are now pouring in from the northern hinterland -- Karnal, Saharanpur and beyond.

The oil industry -- that in all this time kept completely mum, behaving as if adulteration was merely a fantasy of the consumer and the car manufacturer -- even today reports a standard failure rate of 1-2 per cent in fuel samples, an obvious tack to downplay the problem. The anti adulteration cell, that acts on consumer complaints and tip-offs, reports on the contrary a consistently high failure rate. In the total number of outlets inspected during 2003 in northern India so far, the cell confirms adulteration in 22 per cent of the outlets inspected, and other malpractices like short selling in 60 per cent.


The 0.28 million litres of solvents in the custody of the food and civil supplies department, Delhi -- and the latest haul of 0.16 million litres, suspected to be diesel, now with the anti-adulteration cell -- are still to be tested. To date, officials don't know what these contain. Laments one official, "The Society for Petroleum Laboratory (SFPL) refused to test this catch." SPFL officials, on their part, explain that they have the mandate to check only petrol, diesel and kerosene. Not solvents. Amazingly, because vigilance officials have no clue about the nature of the product in their custody, the onus is actually on the adulterator to describe the fuel. Only then would SFPL step in to do tests. This means the SFPL -- primarily set up under the Supreme Court order to test fuel adulteration -- does not consider testing adulterants as one of their responsibilities.

In any case, as another official complains, "How does it matter even if they agree to test? Most likely the suspect samples would never fail any test!" This is the biggest scam the CSE study exposed over a year ago: there are no reliable test methods to detect adulteration!

Here's how CSE stumbled upon this truth. While preparing its study on fuel adulteration, CSE had sent to SPFL three samples each of petrol and diesel. The samples were a decoy; they were deliberately mixed with naphtha and kerosene, respectively, in the following proportions: 10, 15, and 20 per cent. The laboratory came up with shocking results (see table: Dummyfounded!). Tested against BIS specifications on fuel quality, that are normally done to detect adulteration, SFL found only one diesel sample contaminated with 15 per cent kerosene. The rest got a clean chit.

Adulteration is an intelligent science. It is about mixing different hydrocarbons. If astutely done -- that is, if you can figure out the proportions -- it is possible to adulterate and yet comply with fuel quality specifications currently in force. So it is possible to mix diesel and kerosene, or diesel and LDO, without transgressing quality parameters. Compliance with fuel quality standards does not necessarily imply testing for adulteration. The lax fuel quality standards that allow a broad permissible range for each quality parameter absorbs some amount of adulteration.

Yet the profits from even a small amount of adulteration can be lucrative. If a diesel tanker with a capacity of 12,000 litres is contaminated with only 5 per cent kerosene, the profit would be still as attractive as Rs 7,200 per tanker at the current level of prices. Similarly, adulteration of petrol with 15 per cent low aromatic naphtha can earn Rs 25,000 per day.


While adulteration has caught up with technology, government hasn't cared to develop advanced methods to accurately confirm adulteration. There exists, for instance, the gas chromatography (GC) method. One can detect -- as the CSE did with this method at its pollution monitoring laboratory, dramatically high variations in parameters not even checked under the BIS standards. The unique 'fingerprint' of every hydrocarbon molecule, and its proportion to the total, enables accurate comparison with the reference fuels to detect adulterantion.

A sub-committee set up by the Central Pollution Control Board and chaired by P K Mukhopadhyay had recommended, in 2000, alternatives to complement BIS testing methods. It suggested the use of instrumental analysis for simulation and estimation of parameters of fuel samples, including simulated distillation and gas chromatography.

Oil companies oppose such moves. Ever ready with excuses, they claim it is difficult to provide reference fuel for GC. No two batches of products manufactured at the same refinery are similar, even if produced from the same crude. For GC tests the samples from oil depots and retail outlets should be tested against the reference sample obtained from the same batch in the terminal. They claim that batches mix constantly and it is not possible to get the pure reference sample. Since GC is a sensitive method, it will show variation among samples as aberrations.

The fact remains that the oil bureaucracy, or even the Indian government, does not care to find out how other governments apply these methods for surveillance, even in countries where fuel supply chain is far more disciplined than ours (see box: GC is possible). As R Desikan, an expert with CONCERT, a Chennai-based institute investigating fuel adulteration, puts it, "We wish to globalise without applying the global standards."