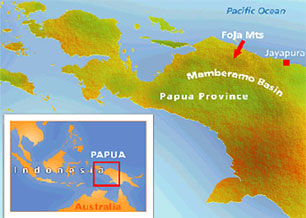 A team comprising scientists from the us, Indonesia and Australia has recently uncovered a 'lost world' in an isolated Indonesian jungle. Its month-long expedition to the mist-covered Foja Mountains of Papua -- Indonesia's easternmost and least-explored province, west of the great tropical island of New Guinea -- yielded 40 new species including frogs, butterflies, plants, and an orange-faced honeyeater -- the first bird discovered from the island of New Guinea since 1939. The explorers were mostly from the Washington-based Conservation International and the Indonesian Institute of Science -- the two bodies also sponsored the study.

"This is closest to the mythical Garden of Eden," marvelled one of them. On the second day of the expedition, he and his colleagues watched in amazement as a male Berlepsch's bird of paradise performed a mating dance for an attending female. This was the first time a live male of the species had been observed by Western scientists.

Also called the six-wired bird of paradise, the Berlepsch's bird had been a subject of much scientific curiosity. It was assumed to share home with the bowerbird. But since both birds remained elusive to humans, the theory remained untested. In 1895, the British zoology enthusiast Walter Rothschild described the bowerbird, based on skins bought from field collectors in Western New Guinea. But about a dozen expeditions in the next 80 years failed to locate the bird's home. The us scientist and Pulitzer Prize-winning author, Jared Diamond, did sight the bowerbird during reconnaissance missions in the Foja Mountains in 1979 and 1981. But he had no photographs to show for his efforts.

The ornithological mystery has been finally resolved. The Conservation International and Indonesian Institute of Science team found the bowerbird in the Foja mountains, and this time the splendid creature was photographed displaying its bower -- a tower of twigs and other forest materials it collects for the mating ritual. The Berlepsch's bird was also captured in all its resplendence. 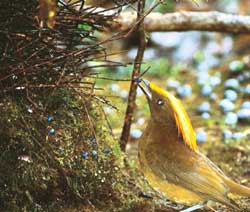 Another highlight of the expedition was the discovery of a population of the golden-mantled tree kangaroo (Dendrolagus pulcherrimus), the rarest of all the arboreal, jungle-dwelling kangaroos. This was the first time that this critically endangered species has been sighted in Indonesia. In fact, the Foja Mountains are only the second site to house the tree kangaroos, after Papua New Guinea. Australian mammologist Tim Flannery, who described this species in 1993, has written that subsistence hunting has extirpated more than 95 per cent of tree kangaroos in Papua New Guinea. The survival of this species will probably depend on the newly discovered population in the Foja Mountains.

One of the team's most remarkable discoveries was a honeyeater bird with a bright orange patch on its face -- the first new bird species to be sighted on the island of New Guinea in more than 65 years. The creature has a bright orange face-patch with a pendant wattle under each eye. The expedition's other discoveries included the largest rhododendron flower on record -- almost six inches across -- along with more than 20 new frog varieties and four new butterfly species.

The scientists believe that the locale of their discovery is largely untouched by humans. But many of the creatures they encountered in the virgin forest were anything but shy of humans. Two long-beaked echidnas, primitive egg-laying mammals, even allowed the scientists to pick them up and bring them back to their camp. This poorly-known species is the island's most enigmatic mammal. It has never reproduced in captivity and scientists have never seen the species' eggs before.

Similarly, botanists in the team collected more than 550 plant species, including at least 10 previously unknown woody plant species -- five species of palms, and five non-palm woody species. The entomological team encountered more than 150 species of butterflies in the Foja Mountains, including four new species and several new subspecies, one of which is being named after Indonesia's first lady. 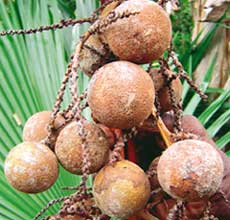 Members of local tribes -- Kwerba and Papasena -- are the customary owners of the Foja Mountains. The tribals who served as guides to the expedition told the expedition members that they hunt, and collect herbs and medicines on the fringes of this vast pristine resource, but they don't venture deep into the forest. The local human population totals only a few hundred, and game is pretty abundant, so, there is little need for hunters to hike into the range's forbidding interior. Giant crowned pigeons, wallabies, cassowaries, tree kangaroos and wild boar are abundant within an hour's walk from their villages, the local people told the explorers. Their ancestors lived closer to the Foja Mountains, in the headwaters of the region's larger rivers where they were relatively safe from attack from neighbouring enemy tribes. But even these older interior sites remained many days' walk from the highest summits.

The area merits substantive attention from conservation and government agencies seeking to conserve the best natural ecosystems in Indonesia.