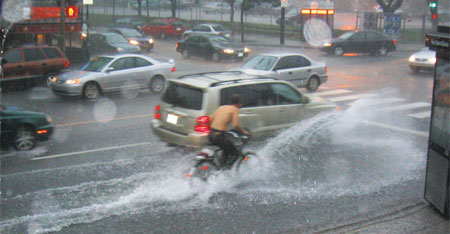 Every year, during monsoon, it is the same story for roads across India. Potholes, potholes and more potholes. It requires a small intervention to not only help reduce costs incurred in repairing a damaged stretch but also increase groundwater levels. Yet, the government has failed to do so.

The potential for roadside Rainwater Harvesting (RWH) remains untapped in India. It has the potential to generate more than 500 billion cubic metres of additional groundwater in the country if adopted in all city roads, including national and state highways, said S K Jain, former groundwater resources expert with the Ministry of Water Resources. In the capital, for instance, such simple ingenuity has been employed in a few locations.

Storm water reduces the adhesiveness of materials used in road construction. “Unless we have proper drainage and camber (curvature of a road surface), accumulation of water gradually causes the binder coating to slip away,” said Sunil Bose, scientist with Central Road Research Institute in Delhi. One answer is to use concrete instead of bitumen. These roads can last longer, but are harder to execute and cost three times. Roadside RWH can go a long way in extending the life of a road, he added.

This is more so for Delhi where more than 99 per cent of the roads are built using bitumen and thus susceptible to damage during the monsoons. Roadside RWH structures utilise recharge borewells to channel water from the surface. Such a structure consists of filter media to ensure quality of water and is protected by perforated concrete slabs to allow for vehicular movement. “At a cost of Rs 80,000, RWH structures can recharge groundwater to the tune of 50 kilo litres per hour,” said Raja Ram Purohit, scientist with Central Ground Water Board (CGWB).

CGWB is yet to set guidelines and standardise the design of roadside RWH. It has instead tweaked the existing RWH design for household or institutional settings. “We recommend that each of the structures have a baffled valve along with an oil-and-grease trap,” said Purohit. Precautions can be taken for unhygienic road catchments and layers of charcoal and potassium permanganate can be used to filter contaminants. “The experience of existing projects tells us that maintenance of the filter media remains an issue,” Purohit added. So, the Union water ministry is hesitant in making the structures mandatory.

Roadside RWH can tap the length and width of India’s road network. The National Highways Authority of India (NHAI) reason that RWH structures must be a part of every project.“We usually stipulate for a structure every 500 metres,” said Biswajit Mukhopadhyay, engineer at NHAI.

The benefits of RWH are apparent in Coimbatore where the groundwater levels have risen by more than 50 metres (see table), a year-on-year pre-monsoon rise. Water stagnation and flooding of streets have also become a thing of the past. Since 2006, the Coimbatore corporation along with Siruthuli, a non-profit organisation has established 150 such structures at a cost of Rs 40 lakh.

The data has not yet been authenticated. “We will complete a pre-and-post monsoon monitoring early next year,” said A Subburaj, scientist with CGWB. Siruthuli has received a grant of Rs 1 crore from the Centre to setup more structures. It has identified 215 locations of which 85 will be constructed at the roadside. Seventy per cent of the work has finished; the rest will be completed by November.