What runs the small farming economy? 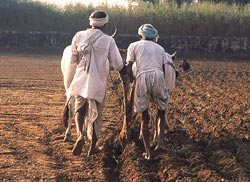 This, after four decades of government efforts to promote farm mechanisation through tractors. Can tractors -- small tractors, whenever they will be built -- completely replace draught animals?

Small and marginal farmers comprise over 80 per cent of cultivators in India. They can't afford tractors. Average farm size, too, is becoming smaller due to fragmentation. Also, there exist large tracts of low tractor density. Besides, difficult terrain in several regions (say, hilly areas) prevents tractor use. So, exactly how viable is the small tractor for such farmers?

A single fact could clinch this argument. Draught animal population in India has been steadily declining (see table below: Just about pulling). Government has poorly invested in research on draught animals. The only time a concerted effort occurred was in the mid-1980s, propelled by sizeable funding -- from foreign and multilateral sources, alarmed at the African food crisis (the absence of draught animals in sub-Saharan Africa meant that ploughs were pulled by humans).

India has always had the best draught animals. The research funds came to institutions affiliated to the Indian Council for Agricultural Research. By the late 1980s, research papers were generated highlighting the most critical issues in the draught animals sector. This was also the time when the value of draft animals to India's economy was calculated and understood (see box: Animal assets). In 1987, a national seminar was held on draught animal power at the Central Institute of Agricultural Engineering (CIAE), Bhopal. Since then interest, more importantly action, in this area has waned.


Among leading researchers on draught animal power were N S L Srivastava and T P Ojha, both former directors of CIAE, and N S Ramaswamy, former director of the Indian Institute of Management, Bangalore. "Draught animals and tractors are complementary sources of power on Indian farms and will continue like that for many more years to meet the increased demand of power, of increased production and productivity," says a 1987 paper Ojha wrote, analysing draught animal power and tractors. It points out that a 35 hp tractor can prepare the seed-bed and sow 0.2 hectare (ha) in one hour at Rs 270-300 per ha. Bullocks need an entire day for the same area, at Rs 300 per ha. The problem is that draught animals have to be fed throughout the year, though their optimal use is restricted to three months in the year, Srivastava told Down To Earth.

The viability of draught animals depends on the availability of free fodder, through crop residues or from grasses in village pastures. The mid-1980s also saw the most comprehensive study of the destruction of village pastures, by N S Jodha of the International Centre for Integrated Mountain Development, Kathmandu. But the most serious challenge, it emerged, was the destruction of valuable breeds.


India has the world's best draught animals, particularly cattle (see 'India carriers Inc', Down To Earth, June 15, 2000). They were promoted in pre-Independence India by princely states and temple trusts, which provided funds to develop specialised breeds as well as stud bulls for breed improvement in villages.

Of India's 27 known cattle breeds, most were developed for draught in times the economy ran on animal power. Milk production wasn't the focus of cattle breeding, then. With the Green Revolution, it was assumed tractors would make draught animals irrelevant. Government support for breed maintenance died out. Provisional figures for the 2003 Livestock Census show indigenous cattle have decreased by 13 per cent from 1992. Crossbred cattle have increased by 46 per cent. So much so, most indigenous cattle -- 80-90 per cent -- is now categorised as 'non-descript'.

With the White Revolution -- milch cattle were its backbone -- the breeding emphasis changed. Breeding programmes turned into crossbreeding with exotic cattle. Meant to improve 'non-descript' animals, it led to the genetic decimation of the best draught breeds (see 'Vanishing breeds', Down To Earth, September 15, 1997).


CIAE continued to work on design improvements in carts and other animal-drawn agricultural implements. A designs it has been promoting is the Nagpuri yoke: it increases energy output from draught animals by more than six times, as compared to several local yokes used across the country; the harrow disc's size is smaller. Elsewhere, Ramaswamy founded the Centre for Action, Research & Technology for Man, Animal & Nature in Bangalore, which has been doing similar innovations with bullock cart design.

But among the higher echelons of agricultural policy-making and research, draught animal power is considered a very lame duck. All the research and analysis of the 1980s should have led to a strategy for the draught animals sector. But it didn't. Part of the reason, says an official who was part of the research euphoria of the 1980s, was orientation. "It was driven by funding, not by felt needs. It was a golden opportunity to use money for a critically ignored sector. The research should have created a focus on fodder and genetic improvement," says the official, not wishing to be named.


No. The fodder crisis has gotten worse. Fodder prices compete with prices of foodgrain in several parts of the country, rising further during drought. Work such as that of Jodha has become extinct; even the lessons haven't been learnt. Governments continue to redistribute pasturelands to landless farmers; its part of the short-term vision they possess. The research of the 1980s should have helped build a political consensus on livestock issues. Given the holy status of cattle among Hindu and Jain communities, this should have been imminent. But it hasn't.

The most serious challenge today is the loss of the genetic base of draught animals, point out animal breeders. It is very easy to develop milch breeds, for the output is easy to calculate in terms of quality as well as quantity. Developing draught breeds is several times more difficult: the criteria for measuring are not very clear. Breeding experiments with draught animals probably don't exist anywhere in the world. And if breeding draught animals were a serious business, more than 90 per cent of bullocks with proven draught ability would be found castrated, to make them easy to handle.

One way to maintain the draught breeds would have been to tap into foreign markets. After all, didn't the research funding come as a result of the African farm power crisis? But India hasn't exported draught animals to Africa; it hasn't developed any market for draught breeds at all, with or without the support of development agencies. Brazilian breeders can often be sighted in Indian cattle fairs, selecting animals of fast-growing breeds that possess resistance to diseases; does the government know this? Is it prepared to respond to such interest, via a full-blown strategy? In fact, one of India's leading business houses with expertise in cattle breeding has been seeking a license to export embryos of the Ongole, the largest cattle breed in the world, native to Ongole in Andhra Pradesh. But the Union ministry of agriculture's department of animal husbandry and dairying has steadily refused. The department has a breed conservation plan of its own, which is ineffective. On top of that, it prevents efforts to profit from draught breed conservation. The losers, utlimately, are small farmers.

Government notwithstanding, the potential of draught animal power remains. Can it be realised? Yes, via a concerted effort to maintain breeds. And, soundly managing common pastures: this is possible if development funds of local self governments are tied to the state of its commons. Collective action only comes through collective pressure.