A bank to save the embarrassment of riches

Surplus food from hotels in the Capital is no longer thrown away: A non-profit organisation that started recently collects the food and distributes it to the needy

A bank to save the embarrassment of riches 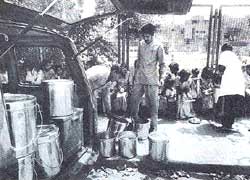 ALTHOUGH every city has its pockets of affluence, there is no guarantee that all its residents can get a square meal a day. On the other hand, there is wanton waste of food -- mainly by hotels, restaurants and flight caterers.

In the US, a study estimates 137 million tonnes of food -- enough to feed 50 million Somalis -- worth $31 billion is wasted annually. In India, too, there is a considerable amount of food thrown away. "So far, no study has been done in India, but I am sure the quantity of wasted food is substantial," asserts Subhash Bhalla, president of a non-profit organisation that collects excess food and distributes it to the needy.

Excess food, which results mainly from lower-than-anticipated sales in hotels and flight cancellations, is normally thrown away. Determined to reduce both the hunger of the deprived sections of society on the one hand and the waste of food on the other, Bhalla set up the Agya Wanti Bhalla (AWB) food bank in November 1991. The Delhi-based bank operates along the lines of the more than 100 food banks in the US. It collects about 50 kg of excess food -- not leftovers -- daily, mainly from hotels and flight caterers. After checking the food for quality, it is distributed to the needy.
When Bhalla initially approached five-star hotels with the idea of the food bank, none responded enthusiastically except the Hyatt Regency. Says Bhalla, "Gradually, however, others chipped in and now I don't have to go to anyone -- they request me to collect food from them." Flight caterers and other hotels joined the group of contributors later.

Bhalla, a qualified civil engineer who now works full-time for AWB, explains, "We collect the surplus food at 7 am every day. Only vegetarian food is collected because non-vegetarian food perishes quickly and may offend religious sentiments."

Brij Mohan Abrol, a doctor, has volunteered to check food quality. Four volunteers and four employees look after the distribution of food from the centralised collection centre in south Delhi's Kailash Colony to all corners of the Capital. After starting with 100 meals a day, the centre now distributes 1,300 meals a day.

The food is distributed to various institutes, including the Multipurpose Centre for the Deaf and Dumb, the Prayas Foundation and the National Blind Institute, and the lepers' colony.

Says 21-year-old Ganesh Garviyal, a Nepali who is doing a computer course at the Deaf and Dumb Centre, "We wait for the AWB van, which brings lunch for us. I like the food, particularly paneer ki sabzi." More than 60 hostelers of the Centre get lunch seven days a week. Sometimes, when the van reaches late for lunch, the food is heated and served at dinner.
The Centre's spokesperson O P Verma endorses the bank's activities: "The AWB carries food in hygienic containers and there have been no complaints so far about its quality. In fact, negotiations are going on to give them a kitchen here and get meals twice a day."

Unfortunately, an unintended fallout of the scheme has been the reinforcement of "subsidy culture" among the recipients of food. Bhalla could have insisted that institutions render a service in return for receiving the food. Such an approach would have boosted the self-esteem of the beneficiaries.

Bhalla agrees "the staff is inadequate for the entire operation", but AWB is building an infrastructure for efficient collection, storage and distribution of 3,000 meals every day by the end of the year.It has bought a van, a de-freezer, a refrigerator and several heaters. Says AWB operations manager Sucheta Panwar, "We will have two more de-freezers and another van soon."

Recently, NRIs settled in the US, UK and Canada have enquired about contributing to AWB. Bhalla plans to set up branches of the food bank in Calcutta, Bombay, Madras and Bangalore. Altogether, an estimated 15,000 people would be fed daily.

Residents from Kanpur and Jaipur have also asked Bhalla to open AWB branches in their towns. However, Bhalla first wants to make the Delhi unit self-sustaining.

AWB is also planning to rope in private caterers who supply marriage parties and banquet halls for their surplus food. AWB has made a documentary film on its operations, which will be shown to potential donors to help what Bhalla calls the "bank of goodwill".