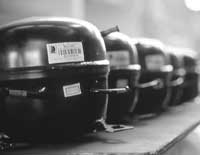 When the time comes to phase out the manufacture of ODS in India, like other developing countries, the country has three options. They can either buy alternative technologies from the West or fund and develop indigenous alternatives or shut shop. Each ODS has a range of substitutes. CFC manufacturers can make the shift to three options: HCFCs, which also deplete the stratospheric ozone layer and which they already produce in their plants in lesser volumes; HFC-134a, a greenhouse gas not yet produced in India, or hydrocarbons, such as cyclopentane, which are the cleanest choice. Producers of other ODS, such as halons and carbon tetrachloride, too have a host of alternatives to look at.

The CFC producers need to be especially careful and quick in their decisions. While their own phase out date is fixed for 2010, production of CFC-based products is banned in India beginning January 1, 2003. The exports markets in other developing countries become crucial for them during the period 2003-2010. But companies in industrialised countries too eye this market. They are allowed under the Montreal Protocol to produce and export a fixed percentage of ODS to developing countries. With Southern companies competing in the same shrinking market, competition is bound to get tougher.


Considering that protocol's multilateral fund is supposed to finance technology transfers to industries in developing nations, procuring technology from the West looks the most lucrative option. But accessing technology remains a nightmare. Patents and intellectual property rights (IPRs) over technologies are held by multinationals that either jack up the prices exorbitantly or lay down impossible conditions. They demand domestically owned firms to give up majority equity holding through joint ventures or to restrict exports. Multinationals like Du Pont do not want industry in the South to become their competitor in the international markets.

The North-based multinationals take advantage of the fact that the protocol fund does not cover high costs of buying IPRs. According to a World Bank study, all producers of HFC-134a, an important substitute for the refrigeration and air conditioning sector, for instance, hold at least one worldwide patent for the production and purification process. The patents expire beyond 2010, the date by which developing countries have to complete their phase out of CFC production. The high cost of patented technology, designs and royalties are not covered by the multilateral fund. The idea of North-funded technology remains a pipe dream.

To frustrate any miniscule chance of countries like India securing technology despite the restrictions, the prices are raked up to preposterous levels. In the experience of one Indian company, the price of technology quoted by an MNC producer for HFC-134a was US $25 million, whereas estimates place its actual cost at no more than US $8 million.

The North-based ODS giants naturally are more keen on exporting their finished goods - HCFCs and HFCs - to India rather than part with the technology for a reasonable price. "In the short-term, environmental agreements like the Montreal Protocol make developing countries dependent on imports," says K P Niyati, head of the environment management division at the Confederation of Indian Industry, Delhi. The duplicity of the multinationals has been in evidence right from the beginning of the protocol deliberations (see box: Dubious substitute).
Faced with the bullying multinationals, the second option for the ODS manufacturers of India is to take funds from the protocol to research and develop indigenous technologies for alternatives. But here too they are caught in a bind that strengthens the North-based companies producing the alternatives. The funds are disbursed for development of technology only if a country commits to never demanding money for the transfer of technology in that sector, even if the indigenous research fails to deliver. The real speak is: the fund does not finance any research for a developing country. If the country wants to break the monopoly gridlock of the multinationals, it does so at the cost of putting at risk its economy.

Despite this, two Indian producers, SRF Limited and Navin Fluorine Industries, have partly funded research into the development of HFC-134a at the Indian Institute of Chemical Technology, Hyderabad. The institute has set up a pilot project and if it succeeds the economic balance could be altered. HFC-134a manufacturing is today monopolised by the US-based Du Pont, UK-based Imperial Chemical Industries and the French mulitnational Elf-Atochem. Meanwhile, some sections of the Indian industry have found that the Montreal Protocol can be milked to their advantage as well.


For Indian CFC producers, the Montreal Protocol is a windfall. Consider this: India has secured US $82 million from the fund to phase out CFC production. The production will be gradually reduced from the last year's production of 18,000 MT to nil by 2010. Of the money secured, US $80 million will go to the four producers as 'compensation'. And with the money in their kitty the four have, sources reveal, begun looking at the easy option of producing HCFCs. Though HCFCs are also harmful to the ozone layer, they have been scheduled for phase out by 2040. And the four companies already produce HCFCs. They now need to only upgrade capacities to meet the demand. In such a win-win situation, quite obviously, neither the industry nor the government foresee any problem in the so-called 'transition'. The industry remains quiet and refuses to share information with the public about how the US $80 million of public money is being spent. Public money and public disclosure, they forget, goes hand in hand.

But even if they do shift to HCFC they need to be cautious. Chinese companies are already producing them on large scale and have the edge over Indian manufacturers because the raw material to produce HCFC, fluorspar, is found in China. Indian companies pay a high custom duty of US $50 per tonne of fluorspar imported. "The export market for HCFC-22 has been badly hit because of China's increasing share in it. As a result, there is a tremendous pressure on margins," says W J Samuel, president, Refrigerant Gas Manufacturers Association.


In its hurry to get what money it can from the fund, the Indian industry leaders have negated the protocol's professed vision. The big manufacturers of the North and the South have become bedmates, using the Montreal Protocol's weak provisions as a cover (see box: Happy bedfellows). The Indian industry has, in its haste, even forgotten that if they opt for HCFCs or HFCs, these two groups of substances too will be phased out in due time. HCFCs will be phased out because they too are ozone depleting and HFCs because they are greenhouse gases. But the companies will not get any money from the fund to make another transition. The protocol only provides for funding one transitory phase. Any changes that they have to make in 2040 when HCFCs are phased out will be totally at their own cost. Also the list of substances that harm the ozone layer is an ever-increasing one. The companies need to be additionally cautious in investing public's and their money in any technology.