The business of ecotourism is set to boom worldwide. Who will gain and who will lose? 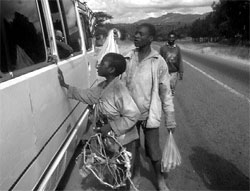 Not everyone is thrilled with ecotourism. Many believe that the big business of tourism people is only using the people in destinations, who offer their natural, social and cultural resources to make the 'tourism product' successful. In a resolution passed in April 2001, opposing the un-initiated International Year of Ecotourism, equations, an organisation working on equitable and sustainable tourism and other environmental organisations said, "ecotourists, consider the forest a 'virgin' to be raped, or 'enjoyed'. The current rush by imperial holarchies to protect 'virgin tropical forests' cannot but be compared to the feudal practice of reserving the young virgins for the feudal lord. After they are 'despoiled', they are handed back....We the undersigned ngo's and people's movements feel compelled to warn all concerned parties not to skirt the critical issues of ecotourism and the fact that a mountain of money will be spent on projects initiated around the international year of ecotourism in order to boost the industry,".

This is the critical challenge. Is socially equitable and environmentally compatible tourism, at all possible, in an unequal and unjust world?


Many believe the answer lies in learning from the scattered but growing examples of micro-partnership that are emerging in ecotourism -- between communities, ngos, conservationists and governments.

In Peru's southeastern Amazon basin, the Ese'eja, the native community of Tambopata are protecting their harpy eagles and scarlet macaws, both endangered large bird species, while showing them to their visitors.

Rainforest Expeditions is Peru's first joint tourism venture between a native community and a private tour company. The native Ese'eja community and Rainforest Expeditions have a 20-year contract stipulating that the company would not interfere with the community affairs and the community must not farm, log or hunt on the approximately 1800 hectares of land that the lodge occupies even though it remains the property of the community. According to the contract, the Ese'eja keep 60 per cent of the profits from the enterprise, have 50 per cent of the decision-making authority and participate in lodge management, marketing and itinerary development.

A partnership between the fiercely independent Maasai community of Kenya and a safari operator has emerged the Shompole group ranch and the Eselenkei group ranch in a conservation area not far from Nairobi. Shompole boasts of a six-room lodge built almost entirely from local materials. Its energy meets are met by solar power and water is heated with cow-dung briquettes. The Maasai community has helped to draw up a wide range of safari activities. The project has won significant grant from the European Union to improve roads and train game wardens for the Shompole conservation area. The Eselenkei group ranch, that borders Amboseli National Park and is on a vital migration route for elephants, has a four-tent Porini Camp that the community has pledged to keep free of livestock.

Since most ecotourism happens at much smaller scales in terms of numbers, smaller enterprises and boarding facilities play a crucial role. The latest in ecotourism is what is described as 'village tourism', where homesteads are being promoted. A successful experiment involving the local community is the Sirubari Village Tourism Project in Nepal. Tony Parr, consultant, Nepal Village Resorts, says "The basic concept used at Sirubari is one of home-stay packages, where guests live largely as part of an individual family. Apart from improving toilet facilities, no great investment in infrastructure was required." Each household that participates in the project is a signatory of the rules and regulations set down by the village. This way the tourist gets a first-hand experience of village life and at the same time, the community benefits financially. The tourism policy in India too talks about village tourism. But it is really an example of learning from the Alps of Europe, where governments provide financial assistance and subsidy to home owners to convert their houses into bed and breakfast facilities. These homesteads are seen as the alternative to big resort ski-tourism, often called the black gold because of its environmental and social implications.

Ecotourism is still not quite there. Nature tourism is definitely booming. But how much of this is "responsible" tourism is difficult to say. The Indian National Tourism Policy sums up the challenge when it says that it wants to ensure that "tourism acts as smokeless industry and ecological footprints remains as soft as possible?" Will policy ever become reality?