In October, the American financial giant Lehman Brothers announced that it had gone bust. Within weeks global financial markets tumbled and economists predicted a financial meltdown. Comparisons with the Great Depression of the early 1930s began to be tossed around. To American historian Scott Reylonds Nelson this comparison is somewhat inept. The financial troubles are more akin to the Great Panic of 1873 in the US, he wrote in the journal, The Chronicle of Higher Education.

The Panic of 1873 was a bank depression that spilled over everywhere else, unlike the depression of the 1930s that began as an industrial depression. But in early 1873, very few in the US had any inkling of a crisis. The country’s government believed that the US had put the Civil War of the 1860s behind. Railroad construction and real estate were booming. Credit was easy, and there were a host of new financial instruments including railroad bonds. According to Reylonds Nelson, in the early 1870s, every gentleman who wore a diamond pin or employed a governess knew he could rely on three things: the Pennsylvania Railroad, Girard’s Bank and the Bible. But by September 1873, Pennsylvania Railroad’s stocks had plummeted by 20 per cent, Girard’s was in the doldrums and the Bible offered cold comfort. 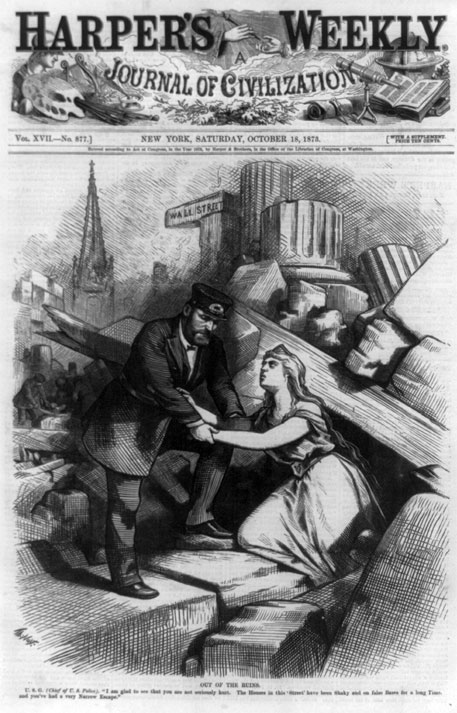 The roots of the crisis actually lay in Europe. In the late 1860s, France, Austria-Hungary and Prussia sought to develop urban areas by founding new savings banks. These banks permitted loans to the middle-class whom the more conservative merchant banks would not touch. These loans funded massive building projects in Paris, Vienna and Berlin. Historians trace this prosperity to trade between Central and Eastern Europe on the one side and the UK on the other. Central Europe provided cattle, rapeseed oil and wheat; Britain produced tin, coal, woollens and manufactured goods. The exchange worked well till American wheat exporters entered the fray. In the early 1870s, they shipped large quantities of wheat from Chicago to either Philadelphia or New York. From there, wheat travelled by steamships to Liverpool or London. For British flour millers, American wheat was much cheaper than the grain bought by Central European traders.

They shifted their source of supply. For traders who brought wheat from Russia’s Black Sea ports, and for flour merchants who shipped from North Germany, the shift was devastating. Central European exports to the UK dropped. American kerosene, a new lighting product, replaced Europe’s rapeseed oil. With the fortunes of Central European traders tumbling, the real estate bubble in Paris, Vienna and Berlin burst. On May 9, 1873, the Vienna Stock Exchange crashed. By the end of May, stock markets had crashed in other parts of Europe. As continental banks tumbled, British banks held back their capital, unsure which institutions were most involved in the crisis. This hit the US very hard. On Wall Street, the biggest victims were interstate railroads. In 19th-century US, financial companies sponsoring railroad construction issued bonds for tracks once they were laid, and then sold the bonds in Europe.

The bonds represented actual railway paraphernalia— wagons, engines or tracks—on the premise that if the railroad failed, bondholders could get their money back when the objects were sold at auction. But in the 1870s, cash-starved Europe could not afford these funds. The railroad financiers were struck a double blow. They borrowed from American banks, which in turn depended on the British banks for cash. Once British banks held back, the system collapsed. In September 1873, railway financier Jay and Cooke realized it had overextended itself and declared bankruptcy. Banks, which had lent heavily to the railroad financiers, Girard for example, followed their debtors into the abyss. A cascade of bank failures continued for four years in the US. The New York Stock Exchange closed its doors for 10 days.

A fourth of the US’ railroad companies went bust. In two years, more than 18,000 businesses failed. Among the survivors of the crisis was Lehman Brothers which had put its money in cattle trading.