A look at floods in Rajasthan's Barmer district

A look at floods in Rajasthan's Barmer district 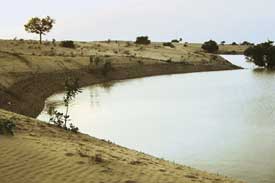 The heavy downpours -- about 723mm in just seven days -- that caused a major flood across Barmer district in Rajasthan, especially the northern and western regions (see 'Heavy weather', Down To Earth, September 30, 2006), has triggered off discussions about how the water can be used. Many experts are saying that it is possible to go beyond the immediate ravages to look at positive aspects.

The first point to note is that even after the rain stopped, the water did not drain out, because of an impermeable layer of sub-surface gypsum. On the one hand, this raises the spectre of new problems related to health and environment. Already, more than 45 people have died of malaria and more than 5,000 have contracted the disease. On the other, it focuses attention on the need to revive traditional water harvesting structures and systems and innovating solutions to conserve this water for times of drought. The debate has been joined.

According to some experts, the best option is to drain the water into the soil below the gypsum layer. But others differ. "The stagnant water is already contaminated and draining it to underground aquifers will contaminate groundwater," says Farhad Contractor, head of Sambhaav, an Ahmedabad-based ngo, in Barmer. "We will oppose any such plan," he adds.

The floodwaters have created small lakes in the region. "In some areas where draining water is not possible, like in Malwa village, the water should used for agriculture," says Tarun Bharat Sangh's Rajendra Singh. In villages like Kawas, the water can be drained to Luni river by clearing channels of natural drainage, he adds. The people of Malwa have agreed to move to a new site. The drowned village will now be a reservoir.

But experts also add that the focus should not be only on conserving floodwater, though that is the immediate requirement. According to some estimates, Rajasthan has about 50 million hectares of rocky terrain with a high run-off potential. If suitable rainwater harvesting structures are developed, it could harvest and conserve 90-145 million cubic metres of runoff a year in addition to recharging aquifers. Though large parts of Rajasthan are drought-prone, flash floods are not uncommon in the state. A small part of the floodwater recharges aquifers, but most of it drains into the sea. "Flash floods, like the present one, can bring as much as 22.6-54.8 billion cubic metres of additional water in a year," says Pratap Narain, director, Central Arid Zone Research Institute, Jodhpur. For the future, the government should focus on this possibility, he adds. According to the Central Groundwater Authority, groundwater in Barmer is overexploited. The recent flood indicates a solution to a potential crisis through groundwater recharge, especially since heavy rainfall once in four to five years is a common phenomenon in many areas.

Like Narain, other experts have focused on the potential of using integrated artificial recharge techniques dams, tanks, anicuts, percolation tanks to rejuvenate depleted high-capacity aquifers. These structures can be built along the drainage line of seasonal rivers created due to flash floods, says Singh

The crisis can show the way.