The Bangladesh government sends thin plastic bags packing, but has Dhaka seen the last of them? Pinaki Roy on the ban's efficacy 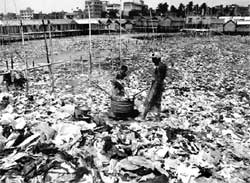 January 1, 2002, saw the capital of Bangladesh nearly purged of polythene bags. This deadline was set by the government to ban the production, marketing and use of less than 20 micron, wafer-thin polybags in Dhaka. The country's environment and forests minister, Shahjahan Siraj, also made an impassioned plea to the city's denizens urging them to shun the use of plastic bags that had lately become an ecological hazard in the metropolis. Judging by their initial response, the people are taking the matter more seriously than just any other new year resolve.

For a city that has earned the dubious distinction of having the world's highest suspended particulate matter (spm) levels, ranking second in terms of lead pollution and where toxic waste is piling up at an alarming rate, this appears to be Dhaka's first step towards a safer environment. But it can at best be described as a modest measure.

The Khaleda Zia dispensation approved the environment ministry's proposal to prohibit plastic bags in Dhaka at a cabinet meeting on December 23, 2001. The nitty-gritty of the regulation had earlier been discussed in inter-ministerial meetings. Prior to this, the previous government had made futile attempts to check the rampant use of thin polybags in 1993 and 1999.

A phased enforcement of the ban will now be carried out all over Bangladesh. Siraj will table a Bill in this regard in the ensuing session of Parliament. The curbs will, however, not cover other plastic goods. It is felt that this is a vital issue left unaddressed. Abu Naser Khan, the secretary general of Bangladesh Poribesh Andolon (bpa), an activist organisation, says that there should be a wider set of guidelines governing plastic usage in the country. bpa and other such bodies are actively campaigning for a holistic plastic waste management policy, he adds. An Indian plastic industry expert who is attending the Ranganath Misra committee proceedings (see box: Ban and beyond) -- which is charting a roadmap for plastic waste disposal in India -- rubbishes the move, dubbing it as more of a fashion statement than a pollution control norm.

That the police have been empowered to slap a hundred-taka (almost two us dollars) fine on those found violating the rule shows the Dhaka authorities' keenness to enforce the law. They have also sought the cooperation of the media and non-governmental organisations to inform the people and help make it a voluntary effort. Harun-ur-Rashid, director of Environmental School of Bangladesh Independent University, advocates a nationwide awareness campaign to ensure its effectiveness. In this context Bangladesh should, however, study India's example where the manufacture and use of thin plastic carry bags were banned in 1999 but the tough regulation remains unimplemented to date despite containing punitive clauses. In fact, India has yet to devise a method to keep tabs on the thickness of polybags.
Dhaka has been swamped by plastic bags over the past 20 years. At the last count, five and a half million bags were being discarded every day. Not only are landfills in the capital overflowing with polythene bags, they have clogged 30 per cent of the city's sewerage system. Soil fertility, too, has been hit due to the non-biodegradable nature of these bags. Quazi Mohammed Shis, chief engineer of the Water Supply Authority (wasa), reveals that plastic bags account for three per cent of the city's pollutants.

The most telltale sign of the havoc they have wrought is formation of a three-metre layer of polythene on the bed of Buriganga river that runs through the city. Apart from the waste dumped by over 1.7 million households daily, chromium, lead, mercury and other toxic chemicals are also discharged into the water body by tanneries and other industries. Consequently, oxygen levels in the river are abysmally low. Once the traditional lifeline of Dhaka, the Buriganga is all but dead today.

Abdul Matin Mandal, director of hydrography in the Bangladesh Inland Water Transport Authority, says: "Dredging the Buriganga is next to impossible because of the layer of polythene bags on the river bed. The flowing capacity of the river is thus greatly reduced."


The ban appears to have sealed the fate of the nation's 4000 registered polythene units, employing thousands of workers. Amirul, a breadwinner though only in his teens, is one such victim. Even his employer, A K M Iqbal - also the secretary of Bangladesh Plastic Goods Manufacturers' Association (BPGMA) - is in dire straits. The machinery he bought for US $30,000 has practically become scrap metal, causing him heavy losses. "If only they had given us six months to prepare," laments Iqbal. BPGMA has termed the decision as "sabotaging the national economy". However, the positive public reaction has drowned protests that were at one time threatening to get out of hand.

The government's move has given a fresh lease of life to the tottering domestic jute industry. Thirty-three factories under the Bangladesh Jute Mill Corporation (BJMC) are going to release two billion jute bags into the market as an environment-friendly substitute for plastic bags. Jute is the chief cash crop of Bangladesh. "Polybag exports earn us around US $5 billion annually, but we were originally exporting jute bags worth three times that amount," says Siraj exuding optimism. Atiur Rahman, a leading economist, feels the new law will adversely affect the economy only temporarily. "Unemployment will rise, investment will be lost and loans will have to be written off. But in the long run, alternative opportunities will be created and the river and sewerage too will be saved," he says.

For now, fishmongers and vegetable vendors on the streets of Dhaka have stopped stocking polybags. And the city's residents are themselves opting for non-polluting alternatives. The experience of Bangladesh's neighbours (such as India) suggests that the most testing part - maintaining the momentum of the campaign - lies ahead. Because even as they are non-recyclable, thin plastic bags have an indefatigable capacity for resurfacing.