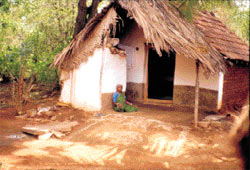 Saalumarada Thimakka, of Hulikal village (near Kadoor, Magadi taluk, Bangalore rural district), has discovered a novel way of dealing with her inability to have a child -- a fact that causes her much anguish. She realised early on that she was not destined for motherhood, and knew she must involve herself in growing something. So she threw herself with passion into planting avenue trees along the entire stretch of a road that was to connect her village to the neighbouring village.

Thimakka's passion was not backed by academic knowledge. Her circumstances denied her the chance of an education. With no clue about the significance of the species she was planting, all she wanted to do was create life. At some point in her life, she married Chikkanna, who herded cattle, while she worked as a casual labourer. She cannot place the events of her life in terms of dates, nor can she count the years. Her guess is that she is a little over 75 years old now.

The lands given to landless labourers were lush green, thanks to a large number of Ficus trees. Thimakka and her husband started grafting saplings from these trees. They grafted only 10 saplings in the first year, and planted them across a distance of four kilometres near the neighbouring village of Kudoor. In the second year, they planted 15 saplings, and in the third year, 20. This pattern continued. Nourishing the saplings gave the couple much-needed emotional solace. Chikkanna tied two huge pails of water to either end of a bamboo pole, slung them across his shoulders, and carried them across a distance of four kilometres to water the saplings. Thimakka carried one pail of water on her waist and one on her head across the same distance. They used no manure to nourish the saplings. The saplings were planted only during the monsoons, and post-monsoons, the couple watered each sapling once or twice a week till the end of the following summer. By the onset of the next monsoons, says Thimakka, the saplings had invariably taken root. "I do not recall any sapling perishing. Perhaps a couple of them did not survive, but my husband was very particular that we replant those that had perished. In all, we planted about 284 trees. I should not take credit for more than what I have done," she says earnestly.

However, her brave efforts would have gone unnoticed if some villagers in Kudoor had not wanted to fell a few of these trees. Alert citizens of Kudoor got Thimakka to lodge a complaint with the police to prevent the tree felling at all costs. The attention she received brought Thimakka's labour of love to the government's notice. She was bestowed with awards and recognition.

Certificates of honour from sundry institutions adorn the mortar walls of her humble hut in Hulikal. A list of some of them: National Citizens' Award 1995; Indira Priyadarshini Vrikshamitra Award 1997; Veerachakra Prashasthi Award 1997; honour certificate of the women and child welfare department, government of Karnataka; and a certificate of appreciation from the Indian Institute of Wood Science and Technology, Bangalore.

At a time when the vanamahotsava and afforestation programmes have become ludicrous, Thimakka's grit and contribution are truly remarkable. Thimakka's instincts are evidently good. She planted trees rich in biodiversity. Today, she is invited for virtually every tree planting initiative in the state. She spreads her native knowledge with gusto, and recommends evergreen trees for arid zones: Ficus mysorensis, Ficus bengalensis, Ficus religiosa, Pongamia pinnata, Mangifera indica, Zizuphus jujuba, Tamarindus indica etc.

Thimakka today craves for a regular income to tide her through days of frailty, old age and blindness. It is not a lot to ask for. But who's listening?