A Pest Of A Problem

Cross-border trade in hazardous chemicals and pesticides threatens the ecology with dire consequences. Sixty-one nations get together to ward off the threat. This is important for developing countries as they lack the resources to manage these lethal compounds

A Pest Of A Problem 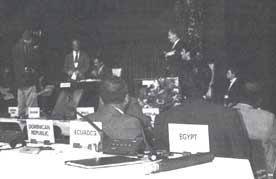 INTERNATIONAL trade in unwanted hazardous chemicals and pesticides is now a serious global concern, especially in developing countries that lack resources to monitor their safe application, storage facilities, and adequate training for their applications. To deal with this, 61 countries have signed a new convention to prevent trade in hazardous chemicals.

Two years after negotiations began under the auspices of the United Nations Environment Program (UNEP) and the UN Food and Agriculture Organisation (FAO), the Prior Informed Consent (PIC) Procedure for Certain Hazardous Chemicals and Pesticides in International Trade was signed in Rotterdam in September, 1998.

In a world where 1,500 chemicals are introduced every year, developing countries have little control over which chemicals cross their borders and cause environmental and health hazards.

In 1996, the FAO published the results of a survey examining the extent to which governments, industries, pesticide users were sticking to the guidelines that were established in 1985. It was revealed that only 25 of the 74 countries responding to the survey were collecting statistics on pesticide import, local formulation and use. Shockingly, 89 per cent of developing countries stated that they have not studied, or have only partly studied, the environmental effects of pesticides.

The PIC convention covers 22 pesticides and five industrial chemicals. For a chemical to make it to the PIC list, it should be banned or severely restricted in at least two countries.

The convention is not a worldwide ban on trade, and will not stop production of hazardous chemicals. It is just a mechanism to manage chemicals in a more sustainable manner.

Industrialised countries have been major exporters of banned pesticides to developing countries. According to the Global Pesticide Campaigner, in 1995-1996, around 21,026, 794 pounds of pesticides, which were banned in the United States, were exported from US ports. This total, which includes never-registered products, represents an average rate of more than 14 tonnes shipped per day. Produced for export only, the products are not evaluated by the US Environmental Protection Agency, US exports of never-registered pesticides, at nearly 9.4 million pounds, has increased by 40 per cent from the figures noted in the three-year period of 1992-1994.
The convention is specifically significant for developing countries, many of whom do not have the infrastructure to manage and monitor dangerous chemicals. A Pesticide Action Network (PAN) press release states, "In many African countries, poisoning control centres have not even been established, and collecting information on incidents is virtually impossible."

The three significant clauses adopted in the convention are,
• Export of a chemical can only take place with the agreement of the importing country.

• An exporting country planning to ship a chemical banned for domestic use will be legally bound to inform importing countries about it, prior to the first export and for annually thereafter.

• Countries will have to make national bans on chemicals known to other signatories, inform each other of the harmful effects of the chemicals prior to shipping, and ensure that labels on chemicals carry adequate information about their risks.

India, who has actively participated in the negotiations for the last two years, has been unable to sign the PIC convention due to procedural delays. It did sign the final act of the convention in Rotterdam, basically signifying that the country is in compliance with the text of the treaty. However, the final approval of the Cabinet is key to India signing the PIC treaty.

Both Vinod Vaish, special secretary of the ministry of environment and forests (MEF), and R R Khan, director of the hazardous substances division, MEF, are of the opinion that this treaty will not have a difficult time getting Cabinet approval as there were no major objections raised during the national inter-ministerial discussions.

In fact, a conflict of interests dominated the international decision-making process. Even an official report of the International Institute of Sustainable Development (IISD) states, "While many references were made to the fact that this convention was to benefit developing countries, the main protagonists were the Organisation of Economic Cooperation and Development (OECD) countries."

Khan acknowledges that though many western countries wanted to come across as the "protectors of the environment in a big way", their views sometimes conflicted with developing countries. At one point, India, along with some African countries, was an active proponent for a clause on liability which would have provided compensation related to accidents involving chemicals. "Initially the liability clause was featured in the negotiations, but was later dropped. Countries like Canada had objections. They refused to be held liable for the weak infrastructure of an importing country." These demands were "fended off in the later part of the negotiations.

According to Barbara Dinham of PAN, the UK, during the PIC negotiations, "The Indian position was mixed as it is both an importer and an exporter, and should therefore comply with all the requirements of being an exporter. As India is one of the few countries exporting DDT, it faced a bit of a dilemma." Perhaps, the fact that India's chemical export was worth Rs 1,000 crore during 1997-98 plays a part in its "mixed" position.

"Our over-riding concern was that we are a big exporter of chemicals. We are the 15th in the list of exporters, not only in developing countries but also in the developed countries," admits Khan.

Both Khan and Vaish, however, emphasise that they did not encounter any problems with either the departments of chemicals or agriculture, with whom they worked in conjunction during the negotiating process.

The issue of the controlling the trade of a "lucrative" industry, estimated at US $30 billion worldwide in 1996, and of its potential conflict with the World Trade Organisation (WTO) did feature prominently. During the drafting of the text, there were concerns among some delegates that the PIC trade rules might provide a country with a trade disadvantage.

However, the convention clearly attempts to maintain a balance between the PIC and other international agreements such as the WTO. It make its position clear in the preamble where it states, "Trade and environmental policies should be mutually supportive with a view to achieve sustainable development."


The vital issue of the convention seems to related to financial assistance for developing countries. According to Vaish, the convention had been documented along with the understanding that developing countries required financial assistance to carry out the PIC procedures in their countries. The issue has not been incorporated into the main body of the treaty.

As was pointed out by many African countries, lack of funds would directly effect the capacity of a country to implement the procedures of the convention. Though a provision was made in the text for providing technical assistance by countries with a superior system of chemical management, many developing countries also require money for building testing facilities, mechanisms for safe disposal of obsolete chemicals, and develop risk assessment capabilities.

To be tested as a severely hazardous pesticide on the PIC criteria, a country must compile information of specific incidents related to the use of the chemical, its adverse effects, and the manner in which its formulation was used. It would be hard for a country to comply with the "extremely stringent" criteria, without testing facilities which provide the relevant data, says Khan.

For the convention to function as a tool to check cross-border trade in dangerous compounds, global cooperation, not only in the form of information exchange but also in access to resources, becomes vital.