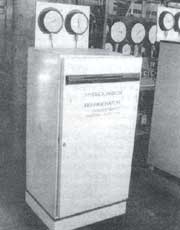 WITH the deadline to phase out ozone depleting substances (ODS) of the industrialised nations of the world already getting over, the countdown for developing nations has begun. As if to signal the urgency, an international conference on eco -refrigeration - fridges using chlorofluorocarbon (CFC) substitutes - was held in New Delhi this February.

The "Ecofrig Project" is set to commercialise ozone-friendly, climate-friendly and energy- efficient refrigeration technologies based on hydrocarbons - a natural fluid. In 1991, Switzerland had launched a global environmental fund intended inter-alia to support North-South technology cooperation for sustainable development. This was followed by the Swiss Development Cooperation initiating the Ecofrig Project in 1992, through information dissemination on CFC phase-out options in the refrigeration sector and highlighting the importance and urgency of converting to natural fluid-based refrigeration technologies.

The Ecofrig project, therefore, takes the Montreal Protocol process a step further towards the broader objectives of sustainable development. Since the industry in Germany is in the forefront for developing ozone-and climate- friendly technologies in domestic refrigeration, the BMZ (German ministry of economic cooperation) has also undertaken the task of promoting these technologies through inter-government bilateral agreements. The GTZ (German agency for technical cooperation) has been commissioned by the BMZ to implement, among other measures, such a project in cooperation with the government of India.
Ecofrig is a new type of North-South cooperation project wherein research institutes and private sector companies from the South directly cooperate with research institutes and private sector companies of the North. The project will facilitate the industry partners to prepare investment projects for seeking grants from the Multilateral Fund of the the Montreal Protocol to finance the conversion Of CFC-based refrigerator manufacturing to a non-CFC, ozone- friendly, and as well as climate -friendly alternative.

Considering the dramatic growth of India's refrigeration appliances market, it is of paramount importance for energy optimisation when converting to non-CFC technologies. The refrigerants used so far in vapour compression cycles were mainly CFC- 12, CFC-502, and HCFC (hydrochlorofluorocarbon)-22. The first two would be replaced in developing countries untill AD 2010, while the latter will be phased out in developing countries by AD 2040.

For substituting these ODS in the domestic refrigerator, there are two main options available: an earlier one, HFC 134a; and a newer one, the hydrocarbon isobutane. At present, the opinion is divided. While the us and Japan seem to opt for HTC 134a, the European industry is switching to isobutane. Japan has very recently, however, started showing interest in the hydrocarbon technology.

There would be no global warming effect attributable to the hydrocarbon @technology which was the start ling point of the whole hydro carbon movement. This is because HFC 134a will ultimately be phased out at a later period due to its GWP (global warming potential). Also, 134a still contains fluorine, which is the most reactive of all elements and forms the strongest acid known. The physical properties of isobutane hydrocarbon refrigerators make for quiet, 'whispering' refrigerators - an additional marketing aspect favoured in Europe.

Isobutane manufacture does not require a complex and costly technology transfer to a developing country. The manufacturing process is easy. It is also a component of hydrocarbon propellant for aerosols as a replacement to CFCs, and so, in view of the certainty of market demand, its price is not expected to be very high.

The most convincing argument, however, is the reliability of this system, which will have fewer compressor failures. But hydrocarbon compressors are said to run 'forever' and is relatively simple to adopt in comparison to 'chemicals'. Here is the chance for any company to set engineering consultang for other countries as soon as they have been through the processes themselves. The only disadvantage of hydrocarbons is their flammability, which requires careful designing and thorough employee and service sector training, which the European refrigerator industry has proved to be viable.

Definitely, the world has learned to live with similar systems where gas has been found to escape freely. For instance, it could be the apparently harmless and ordinary cigarette lighter! No one really worries about the flammability of a cigarette lighter which is carried in pockets or handbags where these objects bounce around more than a kitchen fridge does. But, according to experts, this very disadvantage of flammability can be used positively.


But then, there are several issues in this technology which are of concern. Firstly, the process of converting our existing refrigeration equipment to non-CFC is proving to be both slower and costlier than anticipated. In fact, much of the international funding for CFC conversion is going back to donor countries in the form of technology fees or higher cost of refrigerants and lubricants that the non-CFC equipment will require. The actual financial assistance received through the Montreal Protocol tends to be exaggerated. Presently, no precise index on the ~osts for conversion to HFC 134a on the one hand, or to hydrocarbons on the other hand, can be given. The main costs for the conversion to hydrocarbons are safety costs, which in turn, is highly dependent on the local situation.

There may be significant savings in component production due to the low amount of changes necessary when using isobutane, while for the use of HFC 134a, significant changes are necessary in the production process to avoid humidity and the presence of certain contaminating substances. A look at the largest implementing agency of the Montreal Protocol Multilateral Fund-the World Bank (WB) -reveals that it has a portfolio nearing us $200 million. Investment proiects currently under implementation through the WB are designed to phase out 40,000 tonnes of ODS in 25 countries in 200 enterprise-level activities.

The second cause for concern stems from the fact that a large number of producers of refrigeration equipment, particularly those in the us and Japan, are committed to using synthetic chemicals and - not hydrocarbons as refrigerants. Products using such refrigerants have gained wide acceptance in India and other developing countries and so, in such an environment, it would be difficult for the switch-over to take place from the marketing and servicing point of view.

Thirdly, again as a result of intensive marketing effort principally by overseas producers and their representatives, the frost-free refrigerator is gaining wide acceptance in India and other developing countries. Till such time as products using hydrocarbon refrigerants are available at the same cost with similar facilities and of similar size as units using synthetic chemicals, any manufacturer seeking to use hydrocarbons would be disadvantaged.

Fourthly, air-conditioning and refrigeration of transportation equipment is now gaining popularity. It is important that refrigerants to be used in these applications should be determined as quickly as possible. In 1993-94, Indian refrigerator manufacturers Godrej and Voltas, in cooperation with the German hydrocarbon pioneer, Foron, redesigned their refrigerators on an experimental basis, and gained initial knowledge of hydrocarbon refrigeration. In the present phase, these two industry partners are cooperating with the German refrigerator manufacturer Liebherr to specify the design for their compressors and refrigerators using isobutane as refrigerant, especially, for the frost-free technology.

At the same time, a number of tests (compressor life tests, calorimeter tests) are being carried out by European and Indian research institutions, including both Voltas and Gddrej. In several countries all over the world, the hydrocarbon refrigerator is today the state-of-the-art gadget, whose total production is around four to five million units, with Danfoss of Germany as the leading manufacturer, with approxi- mately 2.5 million hydrocarbon compressors in 1995.


A look at the Indian industry shows that the switch-over to either hydrocarbons or HFC 134a will take place by AD 2005. So far, Kelvinator (a part of Whirpool home appliances) is the only refrigerator manufacturer that has publicly announced its decision to switch to HFC 134a. Others are still reluctant to enter the manufacturing process as they doubt the safety aspect of these fridges.

However, the problem lies not in the technology, but rather in the servicing aspect of the hydrocarbon fridges. It is all very well for a country like Germany to proclaim a zero-accident rate, as it has a superbly organised refrigeration sector. And moreover, Germany does not have a policy of repair -there is only a policy of replacement.

This, anyway, takes an entirely new turn in the case of India, where the refrigeration sector is largely unorganised. Thus, servicing flammable hydrocarbon fridges could pose a hell lot of difficulties: it could very well result in the case of these fridges getting blown up, causing damage to life and property. Currently, the Indian industry is in the process of submitting its proposals to the WB in order to obtain the requisite financial assistance which has been promised by the latter.

Looking at the entire scenario, one feels, now that the ODS are being phased out, a number of new alternatives will emerge -a latest one being the very convenient thermoelectric (TE) chip-based fridge. In the case of the TE technology, heat is pumped out through electronic means without using any compressor, condensers, coils or freon gas. The chip would be guaranteed for five years under normal use, but as there is no wear and tear, life expectancy of theTE chip-based refrigerator is almost infinite.