A revolution in white

A revolution in white 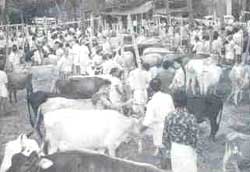 REPEATING the Biblical parable of the mustard seed growing like a banyan tree, a mini dairy under a social service project has mushroomed into a massive people's dairy network within 2 decades. Begun with 5 cattle in 1973, the People's Dairy Development Project (PDDP) - now spread over the 3 districts of Ernakulam, Thrissur and Kottayam in Kerala - announced an output of 12.6 million hires (1) of milk in 1994.

"Almost every family with a milch cattle in areas where the PDDP has units prefers to join the society. It's because of the better service we get and the solidarity artiong the members locally," says K K Rajan, a PDDP directorial board member. Indeed, the PDDP'S headquarters and the milk processing plant at Marottichodu near Kalady is now a symbol of pride and hope for families relying on dairying to supplement their meager incomes.

The PDDP assists a member right from precuting the bank loan and buying the cattle to even imparting formal training on cattle-rearing. True to its reputation as a people's movement, the PDDP'S services also include regular visits by its veterinary doctors to attend the animals at home, artificial insemination facility, regular cattle feed supply, besides cattle insurance. The PDDP constitution even includes a provision to set apart 5 per cent of the profit as scholarships for the education of members' children.

With 97 units clubbed into 25 self-organised societies, the number Of PDDP members has crossed 13,000 in 1994. While the pastuerisation plant at Marottichodu has a capacity of 20,000 1, another 50,000 1 pasteurisation plant is being built at Perambra in Thrissm district. "We never thought that our social sem programme would develop like this," admits Fad Joseph Muttumana, PDDP chairperson and the brain belu the project.

In the '70s, the situation of the ordinary farmer had been pitiable in the absence of adequate financial and irrigation facilities. "We wanted to help such marginal farmers. In attempt to find some additional income earning program for them, we experimented poultry and goat-rearing beh striking upon dairying," expiain Father Muttumana.

The project, originally stun under the ETnakulam dioccs Welfare Society, was registered an independent society in 194 leaving its control in the hands members with the primary no entitled to elect the board of din tors, "What started as a chur programme turned into a peoO movement. Therefore, the chui hierarchy decided to hand it oi to the people," says the 69-year old cleric.

Due to is '"n"ed th7i first dairy unit was started interest-free loan of Its 55, After much persuasion, 20 lagers around Malayatoor Kalady came forward to hybrid cattle on bank I arranged by the Welfare Soci which also made provisions collecting the milk and selling' The news of the success of experiment spread and with Months, the Wtlfai arranged loans for dairy units 10 more villages.

The movement's legacy ,is summed up aptly by its initiatolo who says, "What we have brou about is riot just remunerative better dairying techniques, but new outlook to life rural people, enabling them to stand on their feet.