A step towards health rights for women

Saheli, a Delhi-based women's organisation, has, for some time, been fighting against long-acting female contraceptives like Net-oen and Norplant-6, believed to have dangerous side effects. It took its case to the Supreme Court and got the government to delay the Norplant-6 introduction indefinitely.

A step towards health rights for women 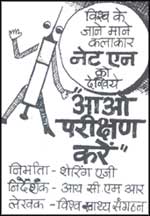 THE RECENT decision to delay indefinitely the introduction of the long-acting female contraceptive Norplant-6 comes as good news for women's groups who have actively campaigned against its introduction in the Indian family planning programme.

Norplant-6 consists of a set of six matchstick-size tubes, filled with progesterone, a steroid hormone, which is implanted in a women's arm and protects her from pregnancy for a period of five years. Norplant-6 has been introduced in several countries, including Finland, Czechoslovakia, USA, China, Bangladesh, Malaysia, Chile and Sri Lanka.

Saheli, a Delhi-based women's collective, was in the forefront of the campaign against Norplant-6. Along with other groups they argued that the contraceptive causes heart disease and high blood pressure and may also result in the formation of ovarian cysts.

Kalpana Mehta, a Saheli activist, hailed the decision to postpone the marketing of Norplant-6 after Phase II trials and to go through with Phase III trials saying, "It is undoubtedly the result of active campaigning by women's groups."

For Saheli, the anti-Norplant-6 campaign was a logical extension of their earlier one against Net-oen, an injectable contraceptive. In 1986, Saheli and other women's organisations, some medical doctors and a journalist, petitioned the Supreme Court against the Indian Council of Medical Research, the ministry of health and family welfare, the drug controller of India and the state government of Andhra Pradesh seeking to block the introduction of Net-oen. This contraceptive, incidentally, had been taken off the shelves in 1971 after pituitary and breast nodules were found in test rats. However, it reappeared in the market less than a decade later as an alternative to oestrogen-based contraceptives.

"The information we had suggested that Net-oen disrupts natural hormonal balance, its long-term risks were unknown and it causes menstrual disturbances," recalled Saheli activist Nilanjana. Saheli contends though these side-effects were known, trials were still being carried out in Andhra Pradesh.

When Saheli was launched from a Nizamuddin garage in 1981, it had a broad focus: to fight for women's rights. Activists found most of their time was spent in dealing with issues of domestic violence and oppression. As Nilanjana pointed out, "We wanted to provide women a forum to share ideas and experiences." It was through this early work that Saheli arrived at larger health issues. "Instead of seeing women as victims," Nilanjana explained, "we felt we should challenge the programmes and policies that result in societal stereotypes responsible for violence."

Through their case against Net-oen, Saheli and the other women's groups urged the Supreme Court to uphold women's fundamental rights. Their petition contended that women's rights to protection of life and personal liberty were being violated because the women involved in the Net-oen trials did not receive information about potential dangerous side-effects of the drug.

According to Mehta, the decision to move the Supreme Court was taken, because "no other avenue was open to preserve these rights," and women's groups wanted "to make India's family planning programme a human rights issue". She said, "Each time a harmful drug enters the market even if we challenge it on technical grounds, the courts tend to say they are not technically competent to deal with the matter. We are challenging these drugs not only on their individual medical side-effects, but also because they all make women the sole focus of family planning and fertility control."

The Net-oen case is still in court and last year lawyer R Venkataramani put forward fresh evidence with regard to Norplant-6 and its potential side effects. According to Venkataramani, a decision should be made within the next few months.

Undoubtedly, petitioning the Supreme Court has had some impact for, if nothing else, Net-oen has been taken off the market. " This," said Mehta, "is because a lot of publicity was generated by going to court."

Venkataramini agreed, "When women's groups like Saheli that are not mass-based go to court it generates publicity of a negative kind for drug companies and the drugs controller which is a pressure on its own."

The odds, however, are stacked against public interest groups. To fight a case in court is a long and cumbersome procedure, and may not be fruitful. Complained Mehta, "Our access to information is limited, while government bodies have all the material available to you."

Groups like Saheli go to court only as a last resort, for the six-year period that such suits normally take makes the legal option a tardy one.