A tradition that got washed away

For more than a century, the people of Motepur used to build an earthen dam on the Punpun river every two years. Today, wage labour has replaced voluntary service and a cement dam threatens to blot out a unique water harvesting system.

A tradition that got washed away 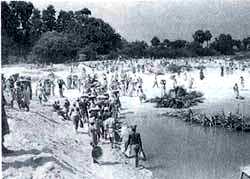 "ALTHOUGH India has built many dams that are engineering marvels, traditional water-harvesting methods are still the lifeline for most villages," says A V Chaturvedi, Jehanabad district development commissioner. He cites the example of Motepur dam, an earthen structure that is built every two years over the Punpun river.

The Motepur dam in Kurtha block of Jehanabad district exemplifies the richness and time-tested effectiveness of traditional technology. But today, it faces extinction and stands testimony to the collapse of another traditional institution -- goaam (voluntary labour) -- that was associated with its construction.

Explains Shiv Kumar Arya, a doctor at Motepur, "The earthen dam used to be built every two years because of the vagaries of the monsoon. It was constructed in December when water flow is low and meant to irrigate just the rabi crop. By July, the dam was washed away."

For more than a century, the dam used to be built and rebuilt every two years by voluntary labour. But after the government took over building the dam in the 1950s, the politician-administrator-contractor nexus has transformed it into a money spinner by virtually burying goaam. Says Jag Prasad, a political activist of Kurtha, "When the government began paying for labour, goaam faded out and now only wage labourers work on the dam."

Despite the government takeover and constant intervention by engineers of the irrigation department, the traditional method of building the dam -- by using mojars and sand bags -- has survived. Mojars are spheres of wet soil bound with paddy straw that can each weigh upto 30 kg. They are placed with sand bags to stop the flow of water. "Mojars are non-porous and arrest low-current water effectively," says Phulchand Yadav, a mojar specialist (See box).


Another tradition -- building the dam in December -- was broken last year when then district magistrate Amerjeet Sinha decided to construct the dam in June so that at least two crops could be irrigated. The administration also undertook the work on its own to break the nexus between politicians and contractors.

This led to a confrontation between Mundrika Yadav, state health minister and the area's representative in the legislative assembly, and Sinha. Says Chaturvedi, who was always with Sinha at the dam site, "Although the contractors' men tried to create trouble, we finished the work within 25 days and spent only Rs 5 lakh of the allocated budget of Rs 8 lakh."

Says Jai Prakash Singh of Kurtha, "The farmers had grown tired of the shoddy work by the contractors. So they supported Sinha and provided shramdaan (voluntary work) to make his efforts a success." Sinha, however, paid the price for locking horns with a minister and was shunted out to a field assignment. The farmers still praise his work, which enabled irrigation for three crops this year -- kharif, garma (summer crops) and rabi.

With one tradition after another being abandoned, there is also talk of making the earthen dam a permanent structure. The Motepur dam irrigates more than 4,000 ha in Jehanabad and neighbouring Patna district. However, says Satendra Kumar, a social and political activist of Bara village, "The dam benefits Patna district more than Jehanabad, which leads to frequent clashes. The tension can be defused if a permanent structure is built."

Hundreds of farmers and government officials agree with Kumar. But the hitch is the proposed Hamidnagar dam on the Punpun in Aurangabad district. Says Manoj Kumar, a post-graduate student of Kurtha, "If the Hamidnagar dam is built, more than 100,000 ha can be irrigated in Aurangabad, Gaya, Jehanabad and Patna districts. The project was proposed in the early 1970s, but the Union government has done nothing about it."

Ram Sihasan Singh of Chulan Bigha, a village that has suffered massive soil erosion because of its proximity to Motepur dam, says if the project is completed, floods can be controlled and the money spent on relief work and the construction of Motepur dam could be diverted to other development work. Surajdeo Prasad Singh, headmaster of Kurtha High School, observes, "The Hamidnagar dam is the only flicker of hope for the farmers of this region who find it difficult to get even groundwater, which has fallen by more than 12 metres in the past 20 years."